One year before the 2022 midterm elections, the United States of America, long the freest, most powerful and most successful nation on earth, is on the brink of total meltdown.

Power-obsessed politicians in thrall to a bizarre, quasi-religious ideology, seemingly oblivious to the destruction and suffering they’re causing, daily implement new agendas that crush America’s great middle class, her economy and her most hallowed institutions.

Staging this revolution from behind their shockingly senile puppet president, Joe Biden, they have fomented a full-scale invasion of the U.S. mainland, mandated that tens of millions of citizens be injected with an experimental new drug or lose their jobs, and heedlessly created Third World-style inflation, shortages, poverty, drug addiction and runaway crime. And they’re just getting started.

Ironically, America’s current ruling elites hate the very nation they govern, daily condemning it as irredeemably racist, when in reality it is indisputably the least racist nation in human history.

Ignoring reality at every turn, they manifest an abiding contempt for biology, the lessons of history, the fundamental laws of economics, the transcendent value of human life, and especially, for God and His laws.

On top of all this, their current figureheads – Joe Biden and Kamala Harris – are unlikable, meanspirited, pathologically dishonest, and in Biden’s case, cognitively disintegrating in real time before the entire world. Harris is so singularly repellant that the Biden administration has essentially kept her hidden since Day 1.

No wonder every recent poll shows voters of both parties are running away, as fast as possible, from Biden and Harris. As USA Today reported in early November, “The approval ratings for President Joe Biden and Vice President Kamala Harris have reached dismal new lows, according to a stunning, just-released poll. In a survey published Sunday by USA Today, the president’s approval rating stands at just 38 percent. … USA Today found that just 28 percent of those surveyed approve of Kamala Harris at the moment.”

Thus, for the ascendent Democratic Party, every bit as addicted to power as a drug addict is to heroin or fentanyl, the only question is: How can Democrats possibly retain their power in light of the growing awareness among the American electorate that their current leaders and policies are basically insane? How, they ask themselves, can they not only avoid losing control of the U.S. Congress in the November 2022 election and the presidency in 2024, but also continue to elect and re-elect Democrats as governors, state legislators, secretaries of state, mayors, Soros-funded district attorneys and other vital “down-ballot” positions?

In light of voters’ ever-plummeting approval of them, there’s only one conceivable solution for Democrats.

Rigging elections. Voter fraud. Changing the rules. Big tech censorship. Shooting down voter ID laws. Shutting out election observers. Eliminating signature verification for mail-in ballots. “Ballot harvesting.” Basically, exploiting every imaginable opportunity to enable, abet, promote, excuse and encourage election-related fraud and abuse in its myriad and ever-expanding forms, all the while vehemently denying it even when caught red-handed – just as in 2020. And, of course, simultaneously accusing everyone demanding fair elections of being white supremacists and terrorists intent on “voter suppression” and implementing “Jim Crow 2.0.”

That is why election integrity is, without question, the most important issue in America today. It is literally the singular key to whether the greatest nation on earth lives – or dies.

And that is why the November 2021 issue of WND’s acclaimed Whistleblower magazine – titled “AMERICA’S FATEFUL CHOICE: RESTORE ELECTIONS OR KILL THE REPUBLIC” – is entirely focused on how, specifically, America can and must assure that the elections in 2022, 2024 and beyond are fair, honest, transparent and trustworthy. For if they are, the deranged and destructive Marxist revolution in America is over. 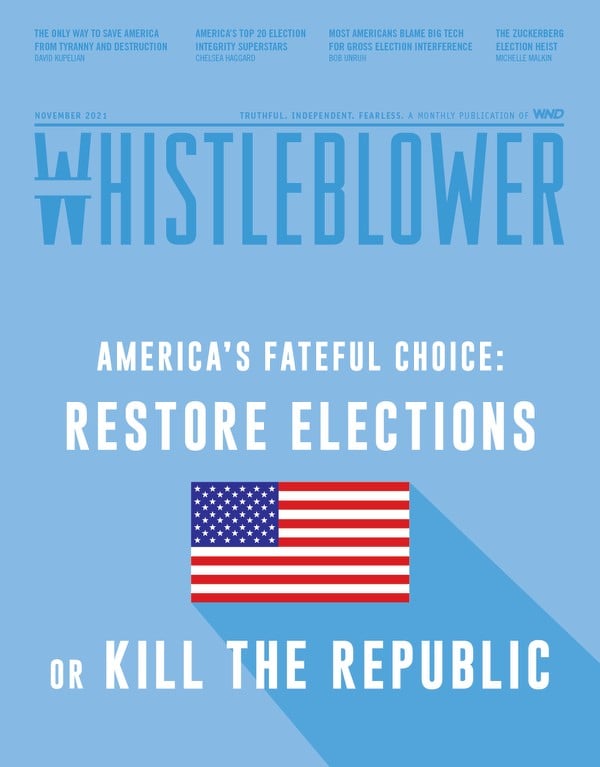 Former Speaker of the House Newt Gingrich recently said an electoral “tsunami” is coming next year.

Maybe so. But only if the elections are fair.

Highlights of “AMERICA’S FATEFUL CHOICE: RESTORE ELECTIONS OR KILL THE REPUBLIC” include:

* “Restoring election integrity: The one and only way to save America from tyranny and destruction” by David Kupelian

* “Newt Gingrich: It’s Democrats, not election-integrity laws, that constitute the biggest domestic threat to America since the Civil War” by Art Moore

* “The most popular election reform proposals in the U.S.” by Chelsea Haggard

* “Michigan gets sued for leaving tens of thousands of dead people on voter rolls: Hundreds registered to vote after they died” by Bob Unruh

* “How did so many cognitively disabled nursing home residents manage to vote last November? Wisconsin sheriff explains: ‘Election statute was in fact not just broken, but shattered’”

* “The Zuckerberg election heist: Exposing the ‘nonprofit’ group billionaires use to influence the vote” by Michelle Malkin

* “Congressman predicts ‘bloodshed’ if elections ‘continue to be rigged’: ‘It’s going to lead to one place’” by Joe Kovacs

* “‘Our Broken Elections’: Who broke them and why, and how to fix them” by Hans von Spakovsky and John Fund

* “The left is evil – and liberals keep voting for them: How a relatively very small group of people is able to control and ruin so much” by Dennis Prager

* “My idea for Trump to replace Pelosi in 2023 is taking shape: An unusual but promising strategy … assuming the midterm elections are honest” by Joseph Farah

“As evidenced by the extraordinary outcome of the recent elections in Virginia,” notes bestselling author and Whistleblower Editor David Kupelian, “today’s radicalized Democrats are now recognized by a majority of voters to be so dangerous to the republic that there is no way they can stay in power without cheating. If they remain in power, America will rapidly become even more unrecognizable, a nightmarish shadow of the magnificent, powerful and liberty-loving nation it once was.

“But here’s the good news,” adds Kupelian. “If America can manage to assure that elections are truly fair going forward, the maniacal Marxist revolutionaries will have to go away and the nation can then return to sanity and healing. Accomplishing that is what this important issue of Whistleblower is all about.”

Next, you’ll get the state-of-the-art digital version of Whistleblower’s sensational and uplifting report documenting how massive numbers of Americans – including doctors, nurses, paramedics, police, firemen, Border Patrol agents, members of the armed forces, pilots, air-traffic controllers and countless others – are standing up to the Biden administration and refusing to bow to the unconstitutional and tyrannical vaccine mandate. As Biden and his surrogates denounce last year’s celebrated “frontline heroes” as rebels, conspiracy theorists, extremists and even potential terrorists, the puppet president’s illegal mandate threatens to cripple American society – from law enforcement to airlines to commercial supply chains to hospitals. It’s already happening. The whole epic showdown is laid out as never before in this powerful issue of Whistleblower, titled “THE GREAT AMERICAN REBELLION: ‘We will not comply!’ COVID-19 power grab ignites bold new era of national defiance.” 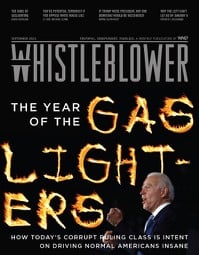 You’ll also get the digital edition of Whistleblower’s groundbreaking report, “THE YEAR OF THE GASLIGHTERS: How today’s corrupt ruling class is intent on driving normal Americans insane.” In the classic 1944 film “Gaslight,” an extraordinarily evil criminal, who has recently gotten married, psychologically manipulates his perfectly sane wife into believing she’s going insane as a means of distracting her from uncovering his horrendous crime spree. From the movie emerged the modern psychological term “gaslighting,” which means, “to cause (a person) to doubt his or her sanity through the use of psychological manipulation.” Today, America’s ruling elites are literally gaslighting the rest of America every single day, from morning until night, in a dizzying and ever-expanding variety of ways. As with all gaslighting, the intended purpose is to confuse, confound, distress, dispirit, intimidate and bewilder people to the point they doubt obvious truths they once knew and instead live in fear and anxiety, thus disabling them from being effective in the ongoing war for America’s future. But now, their dark secrets are totally exposed for all to see in “THE YEAR OF THE GASLIGHTERS.”

Finally, you’ll get the digital version of one Whistleblower’s most popular and important – and potentially even life-saving – issues ever, “ENDING THE PANDEMIC: How vaccine mania and lust for power led to the all-out suppression of proven safe-and-effective COVID treatments.” Americans are discovering that much of what they thought they knew about the COVID-19 pandemic has been a lie. At the same time, the reality of safe, effective, inexpensive and readily available medications that can both treat and prevent COVID infection – successfully used all over the world – has been ruthlessly suppressed at every turn. But the truth is finally emerging, and is explored in-depth – including a comprehensive, up-to-date resource list – in “ENDING THE PANDEMIC.”

If you prefer, you may order a single copy of the November 2021 issue, “AMERICA’S FATEFUL CHOICE: RESTORE ELECTIONS OR KILL THE REPUBLIC.” Or GET THE DIGITAL VERSION HERE!