Another famous death we commemorate this Good Friday

This Holy (Easter) week, a billion Christians around the world, including my wife, Gena, and I, will commemorate the death and resurrection of Jesus Christ. But do you know another famous figure who died on this Good Friday?

Technically, scholars have estimated that Jesus actually died on April 3, A.D. 33, though the exact date is somewhat debated. What’s not debated is that Abraham Lincoln died on April 15, which just happens to fall on Good Friday this year.

As most know, Lincoln was shot in the head at Ford’s Theatre in Washington, D.C., on April 14, 1865. As the assassin and actor John Wilkes Booth fired his derringer gun at the 16th president, he shouted, “Sic semper tyrannis! [Latin for “Ever thus to tyrants!”] The South is avenged,” then jumped onto the stage and fled on horseback. The wounded president was carried across the street to a bed and died the next morning, despite medical heroics in an attempt to save him.

With Abraham Lincoln and Jesus’ death being commemorated on this same Good Friday, I couldn’t help but ponder and weigh in to the much-debated faith and religious devotion of the Civil War president.

To be certain, Lincoln was raised in a Baptist home. He became somewhat of a skeptic in his 20s, then politically and publicly neutral (and often silent) about his religious devotion because of the deep divides of North and South during his political career. In his latter years and during the Civil War, he became increasingly interested and devoted to God and the Bible.

“That I am not a member of any Christian Church, is true,” he responded in a handbill; “but I have never denied the truth of the Scriptures; and I have never spoken with intentional disrespect of religion in general, or of any denomination of Christians in particular.”

In 1866, Lincoln’s wife, Mary, wrote after the assassination that her husband had indeed been “a religious man always,” and “felt religious more than ever about the time he went to Gettysburg” in 1863. She also wrote he was “not a technical Christian,” but scholars differ in their view of what she meant by “technical,” likely meaning he had not “joined” a church. Mary added, “he read the Bible a good deal about 1864.”

Speaking of the Good Book, the Smithsonian Magazine reported, “Seven years after her husband was assassinated, Mary Todd Lincoln presented his friend and neighbor, the Rev. Noyes W. Miner, with a special gift: an 18-pound Bible, adorned with a hand-tooled leather cover and gilt-edged pages, that had once belonged to the president.”

“The Bible remained in Noyes’ family, unbeknownst to historians, for 150 years. But the precious artifact has now been gifted to the Abraham Lincoln Presidential Library and Museum in Illinois, where it went on display for the first time” in 2019.

As to why Mary Todd gifted the Bible to the Rev. Miner, the Smithsonian said, “Mary Lincoln’s decision to give the Bible to Miner may have been driven by sentiment. A Baptist minister, Miner had lived across from the Lincolns when they resided in Springfield, Illinois, and was ‘a friend very much beloved by my husband,’ Mary once wrote. In the wake of the assassination, Miner was among those who escorted the president’s body from Chicago to Springfield, and he read from the Book of Job at Lincoln’s funeral.”

“But the gift may have also been a calculated move. Mary was, according to the library and museum, ‘furious’ over claims by her husband’s former law partner, William Herndon, that Lincoln had been an atheist before he died. Perhaps, by presenting the president’s Bible to Miner, she hoped to encourage the minister to affirm her husband’s faith.”

And so he did. “I never heard a word fall from [Lincoln’s] lips that gave me the remotest idea, that his mind was ever tinctured with infidel sentiments,” Miner wrote in 1881. 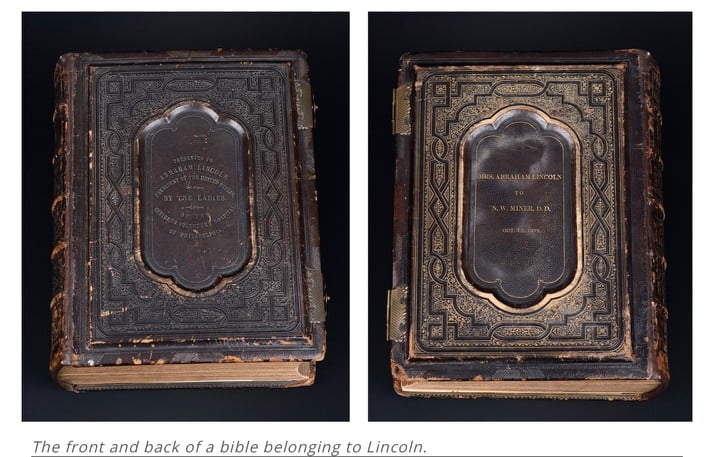 Seems to me, by the end of Lincoln’s life, through his own private reading of the Bible and his very close friendship with his neighbor Rev. Miner, he had come full circle back to the Christian Baptist roots of his childhood, and just in time.

For more on Abraham Lincoln’s journey of faith, read the Christian History Institute’s “The Puzzling Faith of Abraham Lincoln.” If you have doubts or questions about God, the Bible or Christianity, or just want to grow in your faith, I encourage you read this FREE E-Copy of “The God Questions: Exploring Life’s Greatest Questions about the Creator.”