Archbishop bans Pelosi from communion until she repents of abortion advocacy 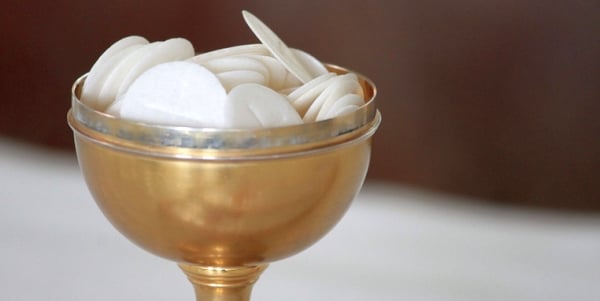 House Speaker Nancy Pelosi, a California Democrat who claims to be active in her Catholic faith even though she openly defies church teachings by supporting abortion, now has been banned from communion in the church until she repents.

The order was issued by San Francisco Archbishop Salvatore Cordileone, which, according to a statement from the church, contacted Pelosi earlier and now was making the action public.

His order was that she is not to present herself for Holy Communion.

“After numerous attempts to speak with her to help her understand the grave evil she is perpetrating, the scandal she is causing, and the danger to her own soul she is risking, I have determined that the point has come in which I must make a public declaration that she is not to be admitted to Holy Communion unless and until she publicly repudiate her support for abortion ‘rights’ and confess and receive absolution for her cooperation in this evil in the sacrament of penance. I have accordingly sent her a notification to this effect, which I have now made public,” the announcement said.

Joe Biden could find himself in the same position, as he also claims to be a faithful Catholic yet advocates abortion at just about any point in the unborn baby’s term.

The announcement, according to a statement from the Benedict Institute, said Cordileone “thanks all those who have prayed and fasted for the conversion of Speaker Pelosi’s hearts and asks us to do so again or for the first time.”

The statement comes from Maggie Gallagher, executive director of the institute.

Pelosi repeatedly has claimed she is a “devout Catholic.”

But the report noted she had “repeatedly rebuffed his efforts to reach out to her to discuss her abortion advocacy.”

Pelosi, whose abortion advocacy dates back many years, said in 2008 that being denied communion would be “a severe blow”

The report said, “Archbishop Cordileone’s instructions apply only within the San Francisco Archdiocese. Other bishops have jurisdiction over such matters when Pelosi is in Washington, D.C., and other dioceses around the U.S. and abroad.”

The report confirmed the letter to Pelosi said the order was issued in accordance with church Canon Law, which states, “Those … obstinately persevering in manifest grave sin are not to be admitted to Holy Communion.”

Cordileone explained he had asked that Pelosi repudiate her abortion support, “or else refrain from referring to her Catholic faith in public and receiving Holy Communion.”

“I also advised her that if she refused to do this, I would be forced to make a public announcement that she is not to be admitted to Holy Communion,” he explained.

He got no response.

Fox reported the announcement marked “an escalation in a decades-long tension between the Roman Catholic Church and liberal Democratic politicians.”

The letter pointedly said, “A Catholic legislator who supports procured abortion, after knowing the teaching of the church, commits a manifestly grave sin which is a cause of most serious scandal to others. Therefore, universal church law provides that such persons ‘are not to be admitted to Holy Communion.'”

The church’s position, since the first century, has been that procured abortion is a moral evil.

Pelosi, in the past, has claimed that the church has “not been able to make” a definition of when life begins, in order to justify her abortion advocacy.

Pope Francis has said, “Whoever has an abortion kills. It is a human life.”