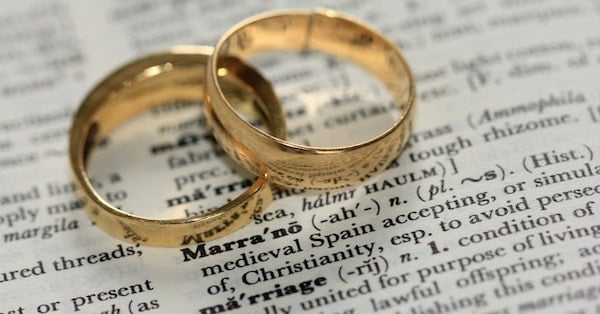 President Biden now has on his desk a bill that would codify same-sex marriage in federal law and, according to opponents, provide legal grounds to prosecute or remove privileges and rights from individuals and institutions that hold to marriage as a lifelong conjugal union between one man and one woman.

The House voted Thursday – with 39 Republicans joining 219 Democrats – to pass the Respect Marriage Act, and Biden has promised to sign it. The chamber passed a previous version of the bill in July and had to vote again after the Senate added a religious liberty amendment.

But opponents contend the amendment negotiated by Democratic Sen. Tammy Baldwin of Wisconsin and Republican Sen. Susan Collins of Maine has no real power to protect religious liberty.

“The left’s forces of religious hostility, aided by 12 Republican senators and 39 Republican representatives, advanced what history may ultimately record as one of the greatest assaults on religious freedom in modern history,” he said. “These members are yielding to the temporal forces of the culture rather than the transcendent principles of our nation’s constitution.”

The Baldwin-Collins amendment states that the legislation may not be used to “diminish or abrogate a religious liberty or conscience protection otherwise available to an individual or organization under the Constitution of the United States or Federal law.”

But prior to Senate’s passage of the bill, Sen. Mike Lee, R-Utah, argued on the Senate floor that his amendment was necessary to prohibit the federal government from retaliating against schools, businesses and organizations because of their religious beliefs about gay marriage.

Many legal scholars joined Lee, a constitutional law attorney, in contending the Respect for Marriage Act’s enshrinement of gay marriage in federal law provides legal grounds to prosecute or remove privileges and rights from individuals and institutions that hold to traditional marriage.

The Lee amendment was defeated by a 49-48 vote. The Senate later voted 61-36 to pass the bill, which would require individual states to recognize another state’s legal marriage.

“Why wouldn’t anyone want to deny the federal government the authority to retaliate against individuals, non-profits and other entities based on their sincerely held religious beliefs?” Lee asked his Senate colleagues.

He spoke directly to the 12 Republican senators who had declared their intent to vote for the bill, urging them not to follow through unless his amendment passed.

He warned of protecting the rights of one group at the expense of others.

“That’s not how we do things in this country,” he said.

Referring to the bakers, florists and others in the wedding industry who have been prosecuted for acting on their religious beliefs about marriage since the 2015 Supreme Court decision, he said “these people are not committing hate crimes against their neighbors.”

“No, they’re not abusing peers for their personal choices either. No, they’re being hauled into courts across this country for serving the poor, the needy, and the refugee in compliance with their sincerely-held religious beliefs.”

He warned on Twitter: “Without the protections provided in my amendment, it will be open season on the rights of the faithful.”

In an op-ed, Lee argued that without his amendment, the Respect for Marriage Act “would only exacerbate and nationalize the discriminatory policies already in place in Illinois, Massachusetts, California and the District of Columbia, where religious adoption agencies are essentially shut down unless they recognize same-sex marriage.”

Sen. Ted Cruz, R-Texas, warned that the bill’s language “would strip the tax-exempt status from many religious schools, faith-based organizations, and other non-profit entities that hold traditional views of marriage.”

Perkins said Thursday that passage of the bill “will accelerate and intensify the already-existing attacks on religious liberty (by creating a private right of action); legislatively cement anti-family policies harmful to children; make faith-based adoption and foster-care agencies a greater target for frivolous litigation, curtailing or ending their ability to help children find homes; threaten the tax-exempt status of adoption and foster care agencies (and other vitally needed non-profit organizations, whether religious or secular); and tacitly vilify millions of Americans who believe in natural marriage by labeling that belief as ‘sex discrimination,’ tantamount to racism.”

Opponents contend the bill’s stated protections for religious liberty are meaningless.  For example, proponents argue the bill states belief in man-woman marriage is “due proper respect.” But the issue is not the freedom to believe, it’s the freedom of individuals and institutions to act on those beliefs.

Further, the amendment by Collins and Baldwin does not provide explicit protections for people of faith, argued Emma Waters, a research associate for the Heritage Foundation.

The Respect for Marriage Act, she wrote, empowers “an ideologically motivated bureaucracy and activist regime with all the legal fodder necessary to attack people of faith.”

“While Christians are used to the false claim that they are bigots, this bill would impact religious persons who hold to traditional marriage, including those of the Jewish or Muslim faiths, or Mormons of the Church of Jesus Christ of Latter-day Saints,” she said.

“If these groups think that their places of worship and nonprofits will be exempt from anti-discrimination lawsuits and attacks on religious liberty, they are sorely mistaken,” Waters continued. “Unless they embrace the demands of same-sex marriage anti-discrimination requirements hook, line, and sinker, then they will be subject to the same concerns regarding tax exemption and licensure.”

The legislation repeals the Clinton-era Defense of Marriage Act with the aim of protecting same-sex and interracial marriage by requiring the recognition of valid marriages regardless of “sex, race, ethnicity or national origin.”

Democrats introduced it after the Supreme Court overturned Roe v. Wade, expressing concern about a concurring opinion from Justice Clarence Thomas arguing the rationale for Roe was the rationale for several other landmark decisions, including Obergefell.

As WND reported, some evangelical Christian figures and institutions and the LDS church, to which Lee belongs, support the bill.

The Council for Christian Colleges and Universities and the National Association of Evangelicals have backed the bill, while the Heritage Foundation, the Alliance Defending Freedom and First Liberty have contended  the protections for religious liberty are inadequate.