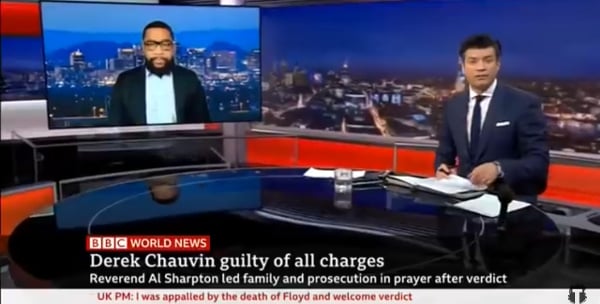 When BBC viewers saw a news presenter turn to an American black man for his reaction to the Derek Chauvin verdict, most likely expected to hear an affirmation of the conviction along with a lament that the United States remains a “systemically racist” nation.

But that’s because they weren’t familiar with Brandon Tatum, a former officer for the Tucson Police Department in Arizona and a co-founder of the Blexit movement of blacks leaving the Democratic Party

“Policing in America is not inherently racist, we do not live in a racist country,” he declared.

The interview Wednesday with the iconic British broadcaster began with Tatum’s reaction to the verdict.

“First of all, I think most of what I heard on the broadcast all the way here is confusing to me,” Tatum said. “I think we’re living in the twilight zone. This conviction, in my personal opinion, did nothing for our country, I mean people are living a lie.”

Tatum pointed out the unusual speed with which Chauvin was charged, only days after the incident, then tried and convicted, calling it “the swiftest judgment I’ve ever seen in my life.”

“I’m not really sure why people are acting like this is monumental,” he said.

Tatum said Chauvin did not get a fair trial, noting, for one, the city paid the family of George Floyd $27 million just before the jury was selected. The defense will have a case on appeal, he said.

“I don’t know why this [case] is such a big focal point, other than people are making money off of the pain of people in our country,” said Tatum.

It’s not a “landmark case,” he insisted, it’s about advancing a “political agenda.”

“They’re pushing lies in our country,” Tatum said. “Policing in America is not inherently racist, we don’t live in a racist country.”

He asserted the case was simply about a police officer who “did the wrong thing and a black man who was on drugs, high, resisting arrest.”

President Biden, Tatum said, was among the leaders who framed a case in which the white officer was convicted as a racial incident.

“So you reject President Biden’s commments about systemic racism and it being a stain on the whole nation?” the BBC host asked.

“Yes. President Biden is an idiot in my personal opinion, and he’s just talking because he’s a politician,” Tatum replied. “Systemic racism, I mean, if you look at Joe Biden himself, he spoke at a Ku Klux Klan member’s funeral and did the eulogy of Robert Byrd.”

Politicians and other leaders, he said, “are just running their mouths and not being honest.”

“That’s why you never see anything change,” he added, “because they are lying to us.”

Tatum then was asked how he accounts for the rate of black people being killed by police being higher than whites, if there’s no “systemic racism.”

The former officer explained that while blacks comprise only 13% of the population, they commit more than half of the murders in the United States. [Bureau of Justice Statistics show that the vast majority of crimes are committed by a person of the same race. In 2019, of the 13,927 murder victims, 7,484 were black and 5,787 were white.]

“We can agree that 13% of the population aren’t the criminals,” Tatum said. “There’s only a small fraction of the black community that is doing this.”

But the demographic breakdown in crimes statistics explains why police are in black communities more and why more black men are incarcerated, Tatum said.

“They are making up lies saying that it has to do with racism,” he said. “Do you understand that there are black police officers, too, that patrol in many of these majority black communities.

Tatum was a standout football player at the University of Arizona before serving as a police officer in Tucson, Arizona, for six years. He drew national attention for his video at an early 2016 campaign rally for President Trump. Another video went viral in September 2017 when he expressed his opposition to NFL players taking a knee during the national anthem.

During his service with the Tucson Police Department, he was a SWAT operator, field training officer, general instructor and public information officer.

On his website, Tatum, a sought-after speaker, explains his “philosophy of success.”

The keys to becoming the best version of yourself have already been set up by God,” he said. “I am here to empower you to walk in all that God has for you and find what your purpose is. It’s that simple!”

‘It ripped the blinders off for the whole world to see’

While the death of George Floyd in police custody has become the impetus for all kinds of measures to address “systemic racism” in America, prosecutors in the Chauvin trial never accused the former Minneapolis officer of racial animus.

Biden, on the other hand, called Floyd’s death “a murder in the full light of day, and it ripped the blinders off for the whole world to see the systemic racism … that is a stain our nation’s soul” and “the knee on the neck of justice for Black Americans.”

Biden is urging the Senate to pass the George Floyd Justice in Policing Act, saying Tuesday after the verdict that he wants to “sign it into law as quickly as possible.”

On Wednesday, the Biden Justice Department announced it has opened a civil investigation of “systemic” issues in the Minneapolis Police Department.

A similar investigation, of the Philadelphia Police Department, was conducted in 2015 by the Justice Department under President Barack Obama and Attorney General Eric Holder. The probe found white police officers were less likely than black or Hispanic officers to shoot unarmed black suspects.

That finding has been confirmed by many national studies. In 2016, for example, a Washington State University study found that police officers are three times less likely to shoot unarmed black suspects than unarmed white suspects, the Washington Post reported. Manhattan Institute scholar Heather Mac Donald, in a presentation last August, showed that the claim that “policing in the U.S. is lethally racist” is provably false, presenting three types of evidence: the raw numbers, individual high-profile cases and academic research, WND reported.

Holder’s Justice Department also investigated the fatal shooting of Michael Brown by a white police officer in Ferguson, Missouri, in 2014. The DOJ confirmed a grand jury’s decision not to indict officer Darren Wilson, concluding the iconic “hands up, don’t shoot” claim was false.