Councilwoman sues officials who jailed her for petition drive 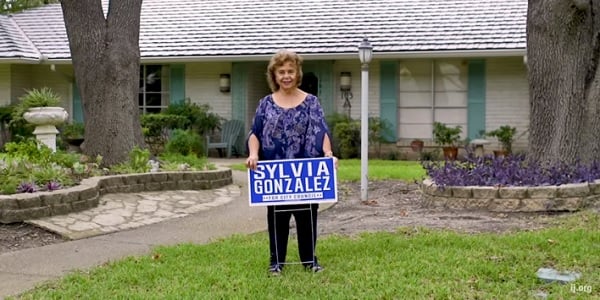 A federal judge allowed a case to proceed brought by a councilwoman in Castle Hills, Texas, who contends city officials arrested and jailed her on a false charge in retaliation for her petition to remove the city manager.

Judge David Alan Ezra rejected the city’s motion to dismiss the case brought by Sylvia Gonzalez alleging First Amendment retaliation by the city’s police chief, mayor, a detective and the city, the Institute for Justice said.

The city claimed it and its officials are protected by qualified immunity.

“I’m incredibly grateful to be able to proceed with my case,” said Gonzalez in a statement released by her counsel, the Institute for Justice. “I’m glad that after all I’ve been through the truth will prevail.”

IJ said the decision “marks an early and important victory in the fight to vindicate Sylvia’s constitutional rights.”

“Too often, government officials argue that a legal doctrine known as ‘qualified immunity’ shields them from being held responsible for violating individual rights. Soon after Sylvia filed her lawsuit, the government defendants claimed immunity and argued that the case should be thrown out. Judge Ezra disagreed and ruled for Sylvia. Now, Sylvia and IJ can proceed and are looking forward to their day in court.”

The case began in May 2019 when Gonzalez sought a city council seat. As part of her campaign, she helped set up a non-binding petition calling on the council to remove the city manager.

“This did not sit well with the mayor and the police chief, among others, who engineered a campaign to retaliate against Sylvia by removing her from office,” IJ said. “When that failed, they engineered a plot to throw her in jail—nonsensically arguing that she tried to steal her own petition. Seventy-two years old at the time, Sylvia spent an entire day behind bars, forced to sit on a metal bench (and not allowed to stand), wear an orange shirt, and use a bathroom with no doors or opportunity for privacy. Her mugshot appeared on TV screens all over Castle Hills and San Antonio.”

The judge took note of the behavior of the city officials.

He pointed out they accused her of trying to steal the petition she submitted, even though it never left the council table. Then they accused her of being sworn in improperly and claimed she would have to be removed and replaced by her election opponent.

Officials issued a “summons” for a misdemeanor, which was dismissed a short time later, and obtained an arrest warrant.

IJ said the warrant “ensured that she would spend time in jail rather than remaining free and appearing before a judge.”

To do that, they “bypassed” the prosecutor attorney’s office entirely.

The judge found that the U.S. Supreme Court has allowed similar cases to move forward.

The judge in U.S. District Court explained: “The court finds that, viewing the facts in the light most favorable to plaintiff, the individual defendants violated plaintiff’s constitutional rights. Plaintiff alleges that she was arrested because she organized a nonbinding citizens’ petition, not because she attempted to steal her own petition. She claims that the individual defendants acted with a retaliatory motive by alleging that they took several actions to attempt to take away her council seat. She further alleges that ‘[t]he retaliatory arrest manufactured by the city and the individual defendants directly and proximately caused severe harms’ including harm to plaintiff’s reputation, future opportunities, finances, faith in the criminal justice system, and physical health. These allegations support the existence of a retaliatory motive and causation.”

IJ said the court “saw through the government’s attempt to hide behind qualified immunity.”

“Judge Ezra ruled that the law is clearly established, and the government has more than fair warning that throwing someone in jail in retaliation for exercising their free speech is a violation of the First Amendment,” IJ said.

The judge also ruled that the claims against the city must move forward.

“This decision is a remarkable victory for government accountability,” said Will Aronin, one of the IJ lawyers representing Sylvia in the case. “The judge ruled that Sylvia’s claims against every single defendant—including the city itself—can proceed. Now, Sylvia will finally get her day in court and we’re confident a jury will see the city’s actions for what they were—an unconstitutional attempt to punish her for exercising her constitutional rights.”

The case is a part of IJ’s Project on Immunity and Accountability, which is dedicated to the principle that the Constitution is not an empty promise and must be enforced.

In addition to Gonzalez’s case, the Institute for Justice is litigating several other constitutional cases that arose in Texas.

They include one on behalf of a Vietnam veteran who was beaten by security guards at a veterans hospital in El Paso, Texas. Another was on behalf of an innocent homeowner in McKinney, Texas, who was left holding a bill for more than $50,000 after a SWAT team destroyed her home in pursuit of a fugitive.

A video about Gonzalez’s case: