The number of illegal immigrants apprehended at the southern border in March increased by 450% over the previous year, according to Customs and Border Protection, countering President Biden’s claim that the surge is largely a seasonal phenomenon, unrelated to his immigration policies.

The nearly 168,195 migrants apprehended last month also represented a 72% increase over the total for February.

The Biden administration’s head of Customs and Border Protection, Troy Miller, argued the “increase in encounters and arrests” is “not new.”

“Encounters have continued to increase since April 2020, and our past experiences have helped us be better prepared for the challenges we face this year,” said a written statement by Miller, whose official title is  senior official [erforming the duties of the commissioner.  “We are committed to balancing the need to maintain border security, care for those in our custody, and keep the American people and our workforce safe.”

However, what is not “new” is the exponential, unprecedented rise in apprehensions as indicated by the blue line in a CBP chart, points out Bob Price, an associate editor and senior news contributor for the Breitbart Texas-Border team. 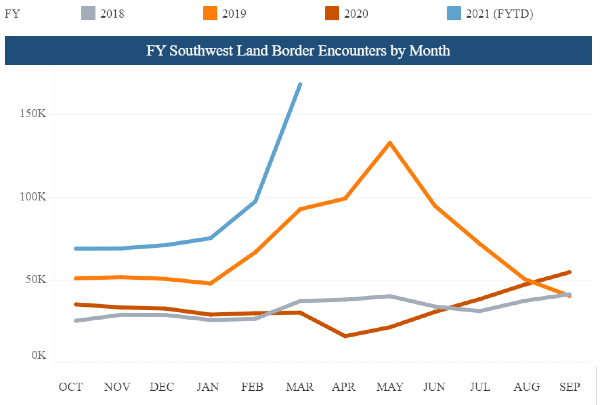 In March 2020, under the Trump administration, CBP reported apprehending 30,389 migrants.

The 168,195 apprehended last month represents an increase of more than 450% over last year.

In March 2019 — during the migrant border crisis that led to Trump policies such as Remain in Mexico and agreements with Central American nations — the apprehensions amounted to 92,833.

Agents apprehended 18,663 unaccompanied alien children in March, which was up from 9,271 in February.

CBP also reported 96,628 single adults apprehended in March, up from 68,992 the previous month.

The Washington Post’s fact-checker, Glenn Kessler, commented on the shocking numbers from CBP.

“Well, I guess the Biden White House line that this is the usual annual migration surge at the border is no longer operative,” he wrote on Twitter.

Well, I guess the Biden White House line that this is the usual annual migration surge at the border is no longer operative. pic.twitter.com/VNLIOZffsv

Biden: Trump did it

At his first news conference as president, Biden argued the immigrant surge is seasonal.

“There is a significant increase in the number of people coming to the border in the winter months of January, February, March. It happens every year,” Joe Biden said.

Biden has blamed Trump for the surge, refusing to call it a “crisis.”

“He dismantled all the elements that exist to deal with what had been a problem and continued to be a problem for a long time,” he said at the press conference. “He, in fact, shut down the number of beds available. He did not fund HHS to get people to get the children out of those Border Patrol facilities where they should not be and not supposed to be more than a few days — a little while. But he dismantled all of that.”

But Republican leaders in Congress point to the low numbers last year after Trump’s policies were put in place.

He argued that the recent establishment of new child migrant facilities is evidence the administration is being overwhelmed.

“They cannot even handle the surge of migrants, they are taking over military bases, the Dallas convention center, and the people on the ground are telling you they can’t control it, it has got to stop,” said the congressman, the House minority whip.