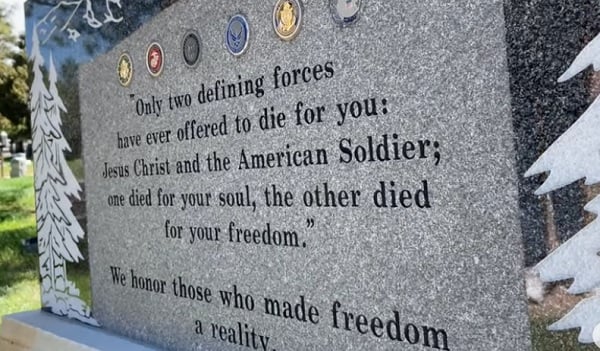 A privately funded and privately owned veterans memorial is being called a “wretched … dumpster fire” and targeted with a lawsuit because it references Jesus Christ.

First Liberty explains the fight has developed in the town of Monument, Colorado, where 16-year-old Michael Carlson created the memorial in honor of his grandfather, who served in World War II, and his father, who was in Vietnam.

It was done for an Eagle Scout project, and he spent two years planning, raising private funds, and creating the site.

It sits in the town’s cemetery, where the family purchased the burial plots on which it sits.

It carries the message: “Only two defining forces have ever offered to die for you, Jesus Christ and the American soldier. One died for your soul, the other died for your freedom. We honor those who made freedom a reality.”

First Liberty reported that put it in the bull’s-eye of a campaign by the Military Religious Freedom Foundation.

It is MRFF founder Mikey Weinstein who described the project as a “wretched, unconstitutional dumpster fire.”

His organization has threatened to sue the town.

But, First Liberty explained, “Remember … the memorial was privately funded and planned by Michael’s own efforts. That means the headstone inscription referencing Michael’s religious beliefs is private religious speech. The religious reference in no way suggests that the government is discriminating, excluding, or failing to honor military veterans of all faiths—or those of no faith—for their sacrifice. Also, while located in the town cemetery, Michael’s family purchased the plots where the memorial sits, ensuring that the town does not own the memorial and is not responsible for its maintenance.”

First Liberty said it is working to defend Michael and the town.

“Your attack on a minor who simply intended to honor our veterans is profoundly disrespectful to all involved,” wrote Stephanie Taub, First Liberty counsel in a recent letter to MRFF.

“The Eagle Scout intended to use his voice to honor all the brave men and women who have served in our armed forces. The memorial he created is privately designed, privately maintained and located on private burial plots in Monument Cemetery.”