“Hitler wasn’t too much of a coward to serve in the Army,” Mark Judson wrote. “Hitler DID fix the German economy (as least in the short run).”

But he said, “You can’t FULLY compare Trump to Hitler.”

“Imagine how much of a dirty POS a person (Trump**) has to be to pale in comparison to Hitler!” he wrote. 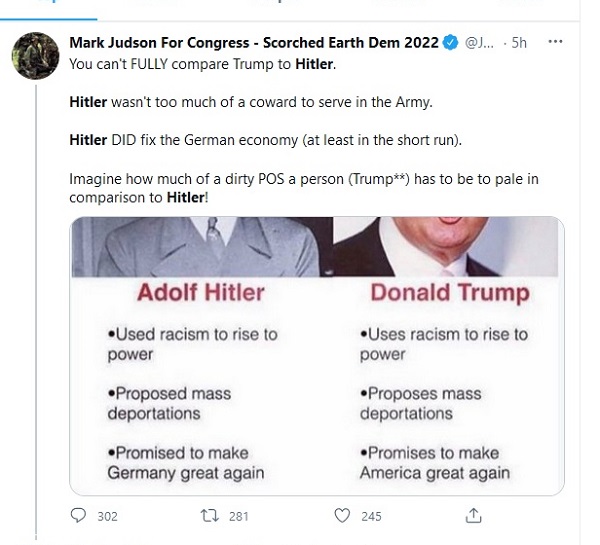 Trump did the same, he said, substituting “Anti-Muslim fascist” for “Anti-Jew.”

And Trump blamed “immigrants” not “Jews.”

Judson was a distant second in the Democratic primary for North Carolina’s 7th congressional district. The Democrat winner, Christopher Ward, lost by a huge margin to Republican David Rouzer.

Judson later posted on Twitter criticism of those who thought he was praising Hitler.

“If your takeaway from the Tweet was that I was complimenting Hitler, then your reading comprehension skills are just as broken as any ties you may have once had to a fact-based reality – per MAGA SOP,” he wrote.

And another said, “Nothing says being a nut quite like COMPLIMENTING HITLER in an attempt to show how your opponents are nazis.”

Judson’s further response was not printable.

Twitter user Ryan Cooke pointed out: “Hitler did not ‘fix’ the German economy. He instituted slave labor and ramped up war manufacturing as an artificial way to keep the economy afloat. He never actually addressed any economic issues.”

Another said: “Hitler did some good things? Name one. This has to be the stupidest tweet of the week.”

Last year Judson said, “Fact: If every single Republican voter magically disappeared tonight – in 10 years the US would have the: best education in the world, most affordable quality healthcare in the world, most prosperous Middle Class, etc.”

He also commented on Disney’s firing of actress Gina Carano for saying people could get fired for expressing an opinion.

Judson’s take? “Nazi trash like Gina Carano Has. No. Place. in America!”