The Purple Heart is a combat-related medal. It is awarded to service members of the U.S. Armed Forces who have suffered abuse as prisoners of war, have life-altering war injuries or been killed in combat. While the Medal of Honor is still the highest military decoration, the Purple Heart is the oldest.

I was reading over the weekend that, on Aug. 7, 1782, Gen. George Washington, the commander of the Continental Army, created the “Badge for Military Merit” in Newburgh, New York.

According to History.com, it was “a decoration consisting of a purple, heart-shaped piece of silk, edged with a narrow binding of silver, with the word Merit stitched across the face in silver.”

“The badge was to be presented to soldiers for ‘any singularly meritorious action’ and permitted its wearer to pass guards and sentinels without challenge. The honoree’s name and regiment were also to be inscribed in a ‘Book of Merit.'”

Peter Bedrossian, program director of the National Purple Heart Hall of Honor, in New Windsor, New York, explained to CBS News: “The Badge of Military Merit is significant, because it is the inspiration for the modern Purple Heart.”

The Hall of Honor has one of only three known original cloth-and-silk Badges of Merit created and issued by George Washington himself.

The amazing thing is that, throughout the Revolutionary War, Washington’s “Purple Heart” was awarded to only three men. Their names were William Brown, Elijah Churchill and Daniel Bissell Jr. We can only imagine their heroic deeds that prompted their names to be recorded in the “Book of Merit.”

Tragically, the Book of Merit was lost. Can you imagine if it were to be rediscovered somewhere today?

Again, according to history.com, the “Purple Heart” award was basically forgotten until 1927, when Gen. Charles P. Summerall, the U.S. Army chief of staff, sent a bill to Congress to “revive the Badge of Military Merit.” It unfortunately failed.

Four years later, in 1931, Gen. Douglas, Summerall’s successor, resurrected the medal for the 200th celebration of George Washington’s birth. Hence, the U.S. War Department proclaimed the official reinstatement of the “Order of the Purple Heart” on Feb. 22, 1932.

Again, according to the National Purple Heart Hall of Honor, the medal was awarded “first retroactive to those who received ‘wound chevrons’ and ‘certificates of merit’ during World War I as well as to those from earlier wars who chose to apply for the award. (From 1932-1942 recipients had to be living veterans or military personnel.) The earliest conflict for which there are known recipients is the American Civil War. From 1942 on it was limited to service men and women wounded or killed by enemy action on or after 5 April 1917.”

The U.S. War Department added to Washington’s design by displaying a profile of the first president and the shield of his coat of arms between sprays of green leaves. 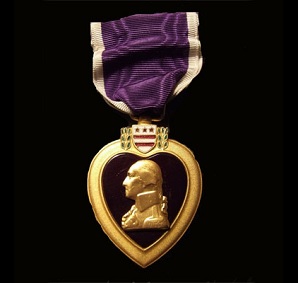 My brother Wieland Clyde Norris earned his Purple Heart on June 3, 1970, when he gave his life in combat in the Vietnam War. Wieland was also awarded the Silver Star Medal for his conspicuous gallantry and intrepidity in action.

At the height of the Vietnam War, both of my younger brothers, Wieland and Aaron, enlisted in the U.S. Army. As a veteran myself, I understood their desire to serve, and I concurred with their decision to enlist. After all, the U.S. Air Force turned my life around. It helped me get on the right path. Maybe the Army would do the same for my brothers.

Aaron was stationed in Korea on the DMZ, and Wieland was sent to Vietnam. As Wieland headed off to Nam, I hugged and kissed him and said, “I’m going to miss you. Be careful.”

On June 3, 1970, Wieland’s company was surrounded in dangerous enemy territory in the Thua Thien province. Every other soldier refused in fear to walk point. (If you don’t know, “to walk point” means to assume the first and most exposed position in a combat military formation. It’s the lead soldier or unit advancing through hostile or unsecured territory. To do so often incurred grave injury or even death.)

Wieland courageously stepped forward when no one else would. When the Vietcong fired on him, the rest of his squad knew their enemies’ location and were then able to fight their way out. Wieland sacrificed his life and saved dozens of others that day.

Wieland’s body was laid to rest at Green Hills Memorial Park in Rancho Palos Verdes, California. His name is also on the Vietnam Veterans Memorial in Washington D.C. (Name inscribed at VVM Wall, Panel 09w, Line 5). I dedicated all my action movies to Wieland.

My wife, Gena, and I have been and always will be big military supporters. And in this week just following National Purple Heart Day, we salute and commend all of its recipients, both living and deceased.

As Gen. Washington said over two centuries ago, “Let it be known that he who wears the Military Order of the Purple Heart has given of his blood in the defense of his homeland, and shall forever be revered by his fellow countrymen.”