'Get the shot or get shot': Some push 'mass genocide' for the unvaccinated

A former top attorney for President Donald Trump is calling attention to alarming comments urging people to “Get the shot or get shot” in a push for everyone to receive a COVID vaccination.

“They are literally calling for mass genocide,” says Jenna Ellis, the former senior legal adviser to Trump. “Are you paying attention yet?”

Ellis, who is Christian, made her comments as she shared an image of a remark by someone with the user name of Lars McMurtry, who boldly stated: “The CDC should roll out a new program: Get the shot or get shot.

“There unvaccinated need to be rounded up and lined up in front of open trenches. Their choice is simple.

“America has had enough of their virus. We need to get back to normal life.

“With or without them.”

They are literally calling for mass genocide.

Are you paying attention yet? pic.twitter.com/TOswz0niZX

Some online responses to Ellis’ message include:

One Twitter user included a photo of a wartime scenario showing people in a trench lined up for execution, with the response to Ellis stating: “History always repeats itself when when evil is allowed to flourish.”

History always repeats itself when when evil is allowed to flourish. pic.twitter.com/YnOigBDNVU

Twitter has since suspended McMurtry’s account, but the sentiment promoting the killing of people who refuse to get a COVID vaccine are not isolated.

Others are sharing comments and images online with a similar mindset.

One photo shows a memorial of fallen heroes vandalized with the spray-painted message: “The real heroes are the vaccinated.”

Of all the pictures and screenshots I’ve posted on this thread… this one here, for me, is the absolute lowest of the low. pic.twitter.com/QYcO2YxPFB

“I am ready to say let them [the unvaccinated] die. You make a choice to not get your shot for any reason other than a doctors note, you should not be allowed healthcare. You are like the brats in class that ruin it for everyone.

“If we’re lucky we can cut out 30% of the population that votes the wrong way.”

C.J. Hopkins, a playwright, novelist and political satirist based in Berlin, Germany, is sharing numerous posts on his Twitter page, calling the targeting of the unvaccinated the “New Normal” in Germany.

One image he shared shows the disturbing spray-painted message: “Gas the unvaccinated.” 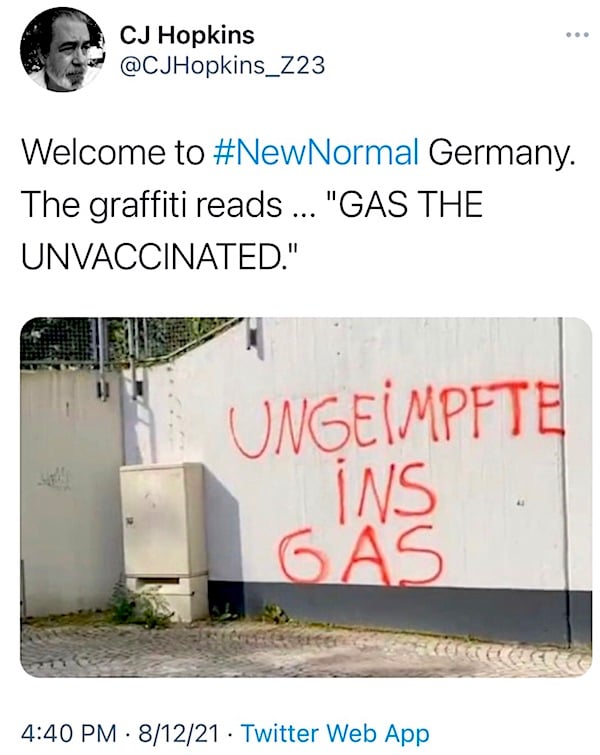 Is it possible we’ve all been missing something extraordinary in life? Can we really discover and understand the secret to EVERYTHING? An inspiring new book unlocks hundreds of mysteries from the Bible and your personal life!