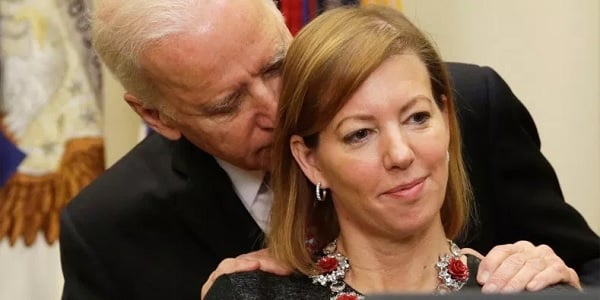 One of Joe Biden’s more notable traits is his habit of getting very close to women or girls and sniffing their hair.

He’s done it over and over.

And likely as a result of that habit of getting “touchy,” he’s been accused of behaving inappropriately. Over and over.

The newest claim against Biden comes from none other than former Education Secretary Betsy DeVos.

The details are in her new book, “Hostages No more: The Fight for Education Freedom and the Future of the American Child” that was provided to Washington Examiner columnist Paul Bedard.

He explains about the latest reported episode of Biden’s “well-established practice of close encounters with women many describe as creepy.”

DeVos charges Biden’s attempt was no less than a try to “intimidate” her.

It happened when she was in a wheelchair following her 2018 bicycle accident.

“DeVos claimed that Biden bent over, put his hands on her shoulders, pressed his forehead to hers, and ‘lingered’ as she tried to roll back,” Bedard reported.

She wrote, “It was gross, and it was also a feeble attempt to intimidate me.”

In the book, Devos explained Biden approached her when she finished a speech to the U.S. Conference of Mayors in January 2019.

When she was finished, an assistant helped her, in her wheelchair, to an area and Biden soon entered.

“He must have heard about my accident because he came directly up to me. ‘How are you doing?’ he asked,” DeVos recalled.

She responded to his question about “hardware” with an explanation that she carried a three-inch screw because of her accident.

Bedard reported: “Then, this casual encounter turned into something totally unexpected and uncomfortable. Biden leaned down, put his hands on my shoulders, and pressed his forehead to mine. He lingered. As I tried to figure out how I could roll the wheelchair and myself away, he said, ‘I have nine screws in my shoulder. But everyone thinks they’re in my head,'” DeVos wrote.

When Biden eventually left, an aide asked if the two were friends, and DeVos explained they’d never met before.

“Well, that was gross,” aide Sarah Delahunty told her.

DeVos wrote, “Yes, it was gross, and it was also a feeble attempt to intimidate me. I think about that encounter every time I hear Biden talk about dismantling our reforms of Title IX.”

One of his nicknames, based on his behavior, is “Creepy Joe.”

WND has carried the report that probably the most significant allegation against Biden is from Tara Reade, who charges he sexually assaulted her.

The report said, “Reade worked as a Senate staffer for Biden in 1993 and has accused the then-senator of kissing her, touching her, and penetrating her with his fingers without her consent. Biden’s 2020 presidential campaign, which did not respond to a request for comment from the DCNF, has denied the assault and said it ‘absolutely did not happen.'”

A cringeworthy moment came from Biden, back in 2020, when he was campaigning in South Carolina and he asked his audience to imagine a naked woman while he was discussing women’s empowerment.

Biden, who is known for being handsy with women and children and for making gaffes, was asked about the issue of women’s empowerment in poor countries during an event at Coastal Carolina University in Conway.

According to Real Clear Politics, the Democratic presidential candidate gave an answer that bounced around from topic to topic for 20 minutes before finally settling in on the Violence Against Women Act.

“No man has a right to lay a hand on a woman for any reason other than self-defense,” Biden said. “If someone in this room got up and took off all their clothes and walked out the door, no man is allowed to touch her.”

Earlier, Lucy Flores, a former member of the Nevada Legislature, accused him of smelling her hair and kissing her on the head in 2014.

Vail Kohnert-Yount, a former White House intern, told The Washington Post that she had a similar encounter with the then-vice president in 2013.

WND reported the year before when Caitlyn Caruso, 22, and D. J. Hill, 59, both told the New York Times about physical interactions they had with Biden that made them uncomfortable.