Hunter Biden investigator to GOP: 'This is totally about Joe Biden'

Several years before the New York Post’s revelations from the Hunter Biden laptop rocked the 2020 presidential election, Peter Schweizer and his Government Accountability Institute presented documentary evidence that at least five members of the Biden family were engaged in a global business, peddling influence and access to the White House for cash.

But as House Republicans prepare to investigate multimillion-dollar deals with the likes of Chinese Communist Party intelligence chiefs, and Russian and Ukrainian oligarchs, they need to maintain a single focus, advised the Government Accountability Institute‘s director of research, Seamus Bruner, in a nearly hourlong video interview with WND (embedded below).

“When Joe Biden is a senator writing banking legislation, Hunter Biden is a lobbyist working for banking companies,” he said. “So, when Joe Biden becomes vice president, that’s when Hunter really gets into the international dealings.”

In 2009, President Obama made Joe Biden point man for Latin America policy, and after the vice president visited Costa Rica, brother Frank Biden’s company Sun Fund Americas struck a deal there. When Joe Biden was overseeing the Obama administration’s pivot to Asia, Hunter Biden accompanied his father on Air Force Two in 2013 to Beijing, where he obtained a 10% stake in a Chinese government-linked equity firm Bohai Harvest that eventually was worth $1.5 billion in working investment capital, as Schweizer and Bruner were first to report. With Joe Biden in charge of Ukraine policy and the U.S. anti-corruption agenda, Hunter Biden sat on the board of one of the nation’s most corrupt firms, Burisma, for a cool $1 million. Did that deal have anything to do with Joe Biden – as he boasted in a Council on Foreign Relations meeting panel – threatening to withdraw $1 billion in U.S. aid to Ukraine if the nation’s top prosecutor, who was investigating Burisma at the time, was not fired immediately? Among the many other deals was brother James Biden obtaining a housing contract in Iraq while Joe Biden oversaw the country’s reconstruction.

“It’s like insider trading, which is notoriously hard to prove,” Bruner said. “But you see the pattern of transactions always just happening to be in the areas where Joe Biden is the policy point man.”

Espionage
Bruner said he and Schweizer became aware of the Bohai Harvest story while they were researching the book “Clinton Cash: The Untold Story of How and Why Foreign Governments and Businesses Helped Make Bill and Hillary Rich,” which brought scrutiny on the Clinton Foundation and a “pay to play” scheme that became the subject of an FBI investigation.

“We were shocked. And it’s only gotten worse, the more we find out – the Chinese intelligence connections, that it’s tens of millions of dollars directly into Biden family pockets.”

Schweizer has said that for Beijing, the deals – including the one with the strategic Communist Party-controlled CEFC China Energy in which a verified email indicates 10% was to go to “the big guy” – are about espionage, Chinese intelligence having “their claws” in the Biden family.

“There’s at least five people tied to the highest levels of Chinese Communist Party intelligence who are enriching the son of the Vice President,” Bruner said.

Evidence on the laptop, for example, shows Hunter Biden received $4.8 million in the CEFC China Energy deal directly from Patrick Ho, described by Hunter as “literally the f****** spy chief of China.” Hunter may have overstated Ho’s status, but the federal government obtained at least one Foreign Intelligence Surveillance Act (FISA) warrant related to Ho, a former Hong Kong home affairs secretary, indicating he was a potential counterintelligence threat.

CEFC chairman Ye Jianming has ties to the People’s Liberation Army, and CEFC itself was a crucial component of Chinese President Xi Jinping’s “Belt and Road Initiative,” established to spread the Chinese Communist Party’s influence and power globally. And when Ho was indicted by the U.S. Justice Department for a multimillion-dollar scheme to bribe top African leaders, his defense lawyers argued his actions were “in furtherance of the Chinese state’s agenda” by promoting Belt and Road. Further, bank records show Hunter Biden was paid a $1 million retainer in March 2018 to legally represent Ho.

Nothing to see here
One week ago, the Associated Press noted that “Joe Biden has said he’s never spoken to his son about his foreign business” before opining that “nothing the Republicans have put forth suggests otherwise.”

But Bruner pointed out that the 2013 trip to Beijing alone, “completely blows out of the water Joe Biden’s and Hunter Biden’s outright lies that they never discussed business dealings, that Joe says he never met with any of Hunter Biden’s business partners.”

In fact, Joe Biden’s introduction in Beijing in 2013 to Hunter Biden business partner Jonathan Li, the CEO of Bohai Harvest, wasn’t the first meeting of that kind, Bruner said. After having gone through every message on the laptop, they discovered that Joe Biden had hosted a delegation of Chinese entrepreneurs in 2010.

The AP added that “there are no indications that the federal investigation involves the president,” referring to the U.S. Attorney from Delaware’s investigation of Hunter Biden, which began in 2018, over possible tax law violations and finances related to his overseas business ties and consulting work.

However, at a minimum, messages from the laptop indicate Hunter Biden was paying Joe Biden’s personal bills while he was vice president. And former partner in the CEFC China Energy deal, Tony Bobulinski – who has turned over all of his evidence to congressional investigators – has described Joe Biden’s role in the global family business as “chairman of the board.”

And what exactly was that business selling?

“What were they getting paid for?” Bruner asked. “That’s the big question that congressional investigators need to get to the bottom of.”

He argued, having gone through the laptop line by line, there is “no discernible work product.”

“The only emails are about, when is the money going to arrive?” he explained. “You don’t have any reports drafted by Hunter on the climate of investment in the United States or anything like that. Hunter Biden just basically appears to be a bag man.”

All told, the Bidens have received directly in cash some $31 million, according to the calculations of Bruner and Schweizer. But amid a complex web of offshore accounts and corporate shell games, there likely is a much higher figure to be found.

What, for example, will the 150 suspicious activity reports banks have filed with the Treasury Department on transactions by Hunter and James Biden reveal? So far, Biden’s Treasury has refused to release relevant financial documents to committee Republicans.

But the GOP will become the majority in January.

“I really hope that Congress goes after these documents hard.”

Bruner said the laptop “proved everything that Peter Schweizer has written in his past three books.” 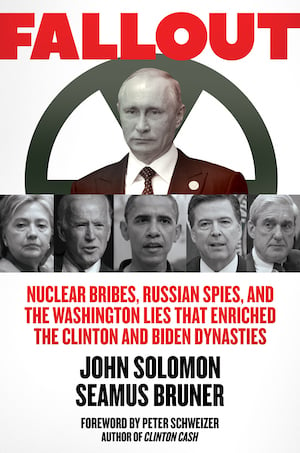 He worked with Schweizer on the 2018 book “Secret Empires: How Our Politicians Hide Corruption and Enrich Their Families and Friends,” centering on “corruption by proxy,” in which family and friends of powerful political figures position themselves as middlemen, creating “previously unimaginable pathways to wealth.” Among the “princelings” featured in the book was Hunter Biden, who was making deals with Chinese Communist Party-linked companies while the Obama administration was negotiating sensitive issues with the Chinese government. In January 2020, 10 months before the laptop was revealed, Schweizer’s “Profiles in Corruption: Abuse of Power by America’s Progressive Elite” included a chapter on the “Biden Five,” the family members who cashed in on Joe Biden’s vice presidency.

Along with assisting Schweizer in his New York Times bestsellers – the latest is “Red-Handed: How American Elites Get Rich Helping China Win” – Bruner is the co-author with investigative reporter John Solomon of “Fallout: Nuclear Bribes, Russian Spies, and the Washington Lies that Enriched the Clinton and Biden Dynasties.”

The payoff from Russian oligarch Yelena Baturina, an associate of Vladimir Putin and the widow of former Moscow Mayor Yuri Luzhkov, was at least $40 million and could be as high as $400 million, Bruner said.

Bruner noted that the Democrats “are very good at narrative,” having turned their Jan. 6 hearings into “a cinematic event.”

“The Republicans would do well to take their time and really build the case, rather than try to throw off some grenades and fireworks,” he said.

“Definitely don’t focus on drugs and prostitutes,” he said of the content on Hunter Biden’s laptop that chronicled his troubled life.