The suspect in the deadly shooting at a Boulder, Colorado, grocery store on Monday has been identified as Ahmad Al Aliwi Al Issa.

Boulder Police Chief Maris Harold said at a press conference Tuesday that Al Issa has been charged with 10 counts of first-degree murder. Harold said the 10 victims range in age from 20 to 65. The suspect was shot in the leg and was in stable condition at an area hospital. Al Issa bought a Ruger AR-556 semi-automatic rifle on March 16, according to court documents

“Why did this happen?” Dougherty asked. “We don’t have the answer to that yet and the investigation is in its very early stages.”

In a subsequent tweet, Posobiec said, “It is beginning to look like the Boulder shooting was a jihadist terror attack.”

And Tuesday evening, the New York Times reported he was known to the FBI. The paper said Al Issa was linked to another person who has been under investigation but didn’t give more details.

In a post June 5, 2019, Al Issa said he believed he was under attack from “racist Islamophobic people” who were “hacking” his smartphone.

“Yeah if these racist islamophobic people would stop hacking my phone and let me have a normal life I probably could,” he wrote.

Of Islam, he wrote, “Muslims might not be perfect but Islam is.”

The #Boulder #Colorado shooter at King Soopers has been named: Ahmad Al Issa. Here are a few screenshots from his FB. pic.twitter.com/hY0WgZuTQd

Al Issa said in a purported Facebook post that Donald Trump won the 2016 election because of “racism”: 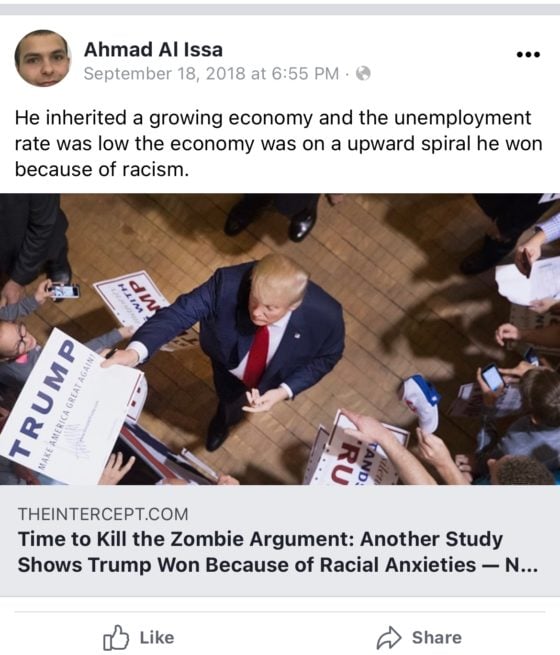 In high school, the brother said, he often said he was “being chased, someone is behind him, someone is looking for him.”

Al Issa was “short-tempered” and “scary,” according to a former high school wrestling teammate, Dayton Marvel, the Denver Post reported.

Marvel said Al Issa once threatened to kill people during a match.

“He was kind of scary to be around,” Marvel said.

At the Tuesday morning news conference, the police chief, Harold, was overcome with emotion.

“I want to say to the community, I am so sorry this incident happened,” she said, “and we are going to do everything in our power to make sure this suspect has a thorough trial and we do a thorough investigation.”

Talley was a police officer and the father of seven children.

On Monday night, he was given a hero’s procession from the grocery store to the funeral home.

Officer Eric Talley was killed heroically responding to the #BoulderShooting on Monday. His police vehicle is parked outside the @boulderpolice station at 1805 33rd St. in memory of Eric and his service. pic.twitter.com/7Cr2xNGcFR