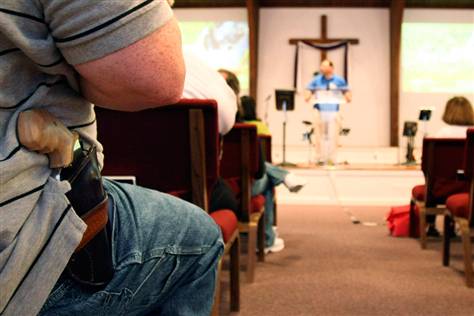 A federal judge ruled Thursday that New York’s ban on concealed carry weapons in churches is unconstitutional, according to court documents.

Judge John Sinatra of the Western District of New York found that the state’s Concealed Carry Improvement Act (CCIA) is unconstitutional because it violates worshipers’ gun rights and hinders the free exercise of religious beliefs, according to the preliminary injunction. The case, Spencer v. Nigrelli, was the third ruling that found the law to be unconstitutional, and follows rulings in the Hardaway v. Nigrelli and the Antonyuk v. Nigrelli cases, according to The Reload.

“Ample Supreme Court precedent addressing the individual’s freedoms under the First and Second Amendments to the Constitution dictate that New York’s new place of worship exclusion is unconstitutional,” Sinatra wrote in his ruling.

The third ruling on New York’s CCIA law could be a positive sign for gun-rights advocates, but New York’s Second Circuit Court has a track record of upholding gun restrictions, according to The Reload. Advocates will likely need to convince several appellate judges before a final ruling.

It is probable that the cases against the CCIA law will end up in court again soon, with one motion, Antonyuk v. Nigrelli, already there, according to The Reload.

“We’re pleased the court recognized that no American should be forced to sacrifice one constitutionally protected freedom to enjoy another. Houses of worship have a constitutionally protected freedom to decide for themselves whether to allow legally possessed firearms into their facilities,” Erin Murphy, partner at Clement & Murphy, one of the firms who first filed the lawsuit, said in a press release obtained by the Daily Caller News Foundation.

“Singling out houses of worship for total disarmament demonstrates hostility toward religion, leaves them defenseless to rebuff violent attacks, sticks the state’s nose into how religious services are conducted, and defies at least two recent Supreme Court rulings against New York,” Murphy continued.

Sinatra based his ruling on the idea that the law singled out religious institutions in ways that it did not single out private property owners, according to The Reload. “There is no evident justification for the view that secular business owners are more qualified than religious leaders to determine whether to allow armed self-defense on their property,” he wrote.

Furthermore, Sinatra stated that His Tabernacle Family Church Pastor Michael Spencer, the plaintiff in the Spencer v. Nigrelli case, has a personal duty to protect church members based on a genuine religious belief, according to The Reload. Even if the state disputed that belief, it cannot infringe on his rights by forcing him to ban concealed carry guns, the opinion says.

“But it does not ultimately matter whether he is correct that hired security—armed or not—would effectively protect the congregation,” Sinatra said. “Pastor Spencer and Church members have a religious belief that they, themselves, must protect the flock. Indeed, religious beliefs ‘need not be acceptable, logical, consistent, or comprehensible to others in order to merit First Amendment protection.’”