Wells Fargo, one of the nation’s “wokest” major corporations, has taken its far-left social agenda up a notch by abruptly shutting down the bank accounts of a professional firefighter and his gun store, Wex Gunworks, three days before Christmas.

On Dec. 22, Wells Fargo sent a letter to Wex Gunworks, owned by Brandon Wexler and based in Delray Beach, Florida, with this message: “Wells Fargo performs ongoing reviews of its account relationships in connection with the Bank’s responsibilities to manage risks in its banking operations. We recently reviewed your account relationship and, as a result of this review, we will be closing your above-referenced accounts.”

“The accounts are expected to close by February 9, 2023 or you may contact the Bank to initiate closure at an earlier date,” read the letter from the San Francisco-headquartered bank, as first reported Jan. 13 by The Reload, a pro-gun-rights publication. “The Bank’s decision to close your accounts is final.” 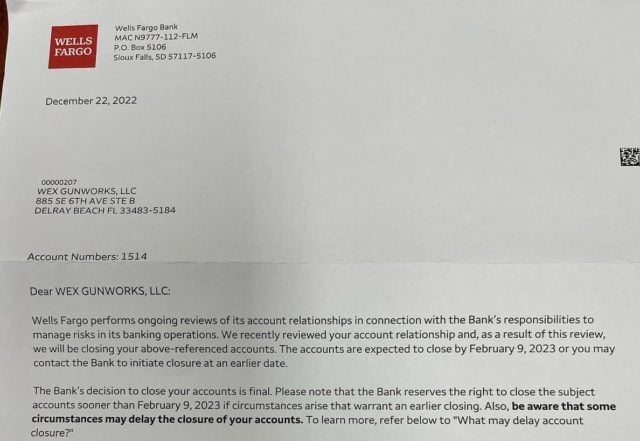 Jennifer Langan, a Wells Fargo spokesman, denied to Reload that the closure had anything to do with the gun “industry,” instead claiming it was “based on our analysis of the risk associated with this customer.” But Wexler and Second Amendment advocates are not buying it.

“I’ve been with them [Wells Fargo] for 25 years,” Wexler told the pro-gun-rights publication The Reload. “I’m a professional fireman. I do everything the right way. It’s messed up.”

He told Reload founder and journalist Stephen Gutowski that he had done nothing different with his business to warrant the Wells Fargo “review.”

“It feels like it’s a direct attack against gun dealers,” he said. “I’ve never seen anything like this.”

Mark Oliva, who represents the National Shooting Sports Foundation, or NSSF, told Reload, “Wells Fargo’s decision to abruptly cancel all business ties with Wex Gunworks is the most recent example of ‘woke’ banking discrimination against the firearm industry.”

“The nation’s largest banks have been actively cutting ties with gun makers and dealers for years in an attempt to force the industry to stop selling firearms, such as the popular AR-15, that executives disapprove of Americans owning. The effort was initiated as part of an Obama Administration program known as Operation Chokepoint, where regulators pressured financial institutions not to do business with disfavored industries, including the firearms industry. After the program was exposed and discontinued, behemoths like Citibank and Bank of America still enacted policies against working with companies that make or sell certain guns or ammunition.”

According to the firearms reporter, left-leaning Wells Fargo, which for decades has been at forefront of corporate “diversity and inclusion” efforts on another “progressive” cause, the LGBT agenda, at first resisted the left’s anti-gun crusade.

“However, Wells Fargo has begun signaling a shift against guns in recent years. In 2019, it committed to donating $10 million to “gun violence research.” A year later, it said it planned to cut ties with the National Rifle Association,” writes Gutowski. “Now, it may be starting to quietly cut decades-long ties with small gun dealers like Wexler. While they may be able to find other banks to work with, being shut out of doing business with major financial institutions limits their options for growth or even survival.”

Wells Fargo is among the top 20 biggest banks in the world.

The left’s “back door gun control” using corporate financial pressure campaigns, as Wexler calls it, is the type of “soft tyranny” that has forced conservatives to begin to create alternate financial institutions, just as they’ve had to create new social media platforms such as Rumble (a conservative, free-speech version of YouTube) to get around leftist tech censorship. Among those who condemned Wells Fargo for “canceling” Wexler is popular talk show host and former California GOP gubernatorial candidate Larry Elder, who tweeted Jan. 13, with a link to The Reload story:

This is why with @JohnRich, @RealBenCarson and others, I co-founded Old Glory Bank. Go to: https://t.co/AllkVFsy4z

Been in discussions with a few people about moving away from Wells Fargo bc of other shady practices but I think I just got the nudge needed.

“This is the United States of America. You don’t get penalized for exercising a Constitutional right. The Second Amendment is nonnegotiable, and here in Florida, we are going to fight to protect the rights of Floridians,” Florida state Sen. Danny Burgess said.