May the Farce be with you

This week, we witnessed one of the biggest farces in this history of our nation: the inauguration of Joe Biden and Kamala Harris. This duo is so popular that they had – maybe – a crowd of 2,000 people attending the ceremony, guarded over by 25,000 military troops (some estimated as many as 65,000 troops) as well as heavy artillery in the form of “crew-served machine guns.”

As one D.C. worker put it: “If you need all this to protect your inauguration from the people, maybe the f-ing people didn’t f-ing elect you.” Others are suggesting we refer to this as a régime, not an administration.

To fill an otherwise bare and echoing National Mall devoid of any spectators, the Biden people planted 200,000 flags as a substitute for the cheering crowds that normally attend an inauguration. The left is putting forth the narrative that the lack of spectators was due to COVID. Horse manure.

During his inaugural address, Biden (a “devout” Catholic) quoted the Bible and urged unity, stating: “We must end this uncivil war.” Really? And how do you propose to do that? By shutting down all conservative speech? By punishing anyone who attended the D.C. Trump rally? By capriciously removing the rights of law-abiding citizens to own firearms? What’s it gonna be? Do tell.

And so begins an absolute farce of an administration. Four years from now, America will be far, far worse off than it was, and – guaranteed, you can quote me on this – every setback and every failure of their far-left communist agenda will somehow be blamed on Trump. (Biden has a long history of watching Obama blame everything that went wrong during his administration on Bush, even after eight years in power.)

By every possible indicator, Trump won in a landslide so massive that the media and Big Tech have been forced to viciously suppress any attempt to question it. Even Democrats know it was stolen, but they’re willing to justify it to get Trump out of office. For a party that purports to be dedicated to science, Dems are certainly furiously denying the statistical impossibility that Trump lost.

Now, in an eerie cry reminiscent of Communist China, the Soviet Union and North Korea, leftists are calling to “deprogram” 90 million Trump voters:

The one golden moment of levity in the last week was an apparent hoax that went viral about the note Trump left Biden. It’s a tradition for the outgoing president to leave a private message for the incoming president. According to the hoax, Trump’s note simply said: “Joe, you know I won.” Doesn’t that just sound like something Trump would do? 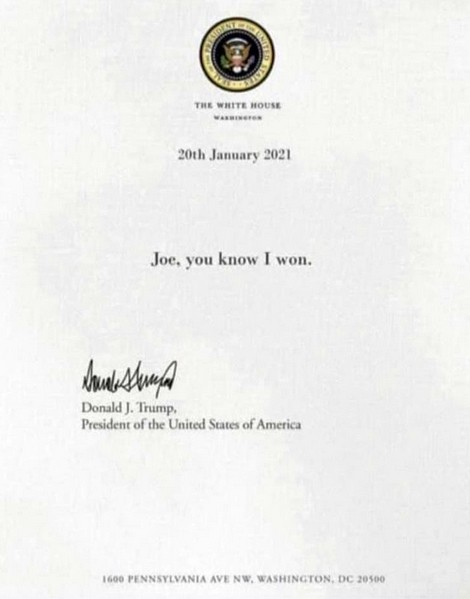 It’s driving the left batty that conservatives won’t accept the fraudulent results of the election and welcome Biden as our new leader. What they can’t seem to grasp is this: the more they try to bash Trump, the more they attempt to erase his legacy, the more they marginalize and try to silence the 90 million voters who wanted another term for The Donald – in short, the more they continue their vengeance – the more pushback they’ll get. Everyone, even the left, knows Trump won. Everyone.

Victor David Hanson wrote, “If Democrats and the Left had wished to reinvigorate the Trump legacy, they could have done no better than unleashing their unhinged and often repulsive hatred of the last two weeks. … The irony is that all these frenzied efforts to mutilate the political corpse of Trump are reviving him.”

I anticipate what’s going to happen in the next few years is conservatives will develop a parallel nation – a separate economy, a separate media, separate social platforms, separate schools, separate employment opportunities, separate churches, separate online merchandise sources and even separate towns (the American Redoubt movement is quite strong). If the left doesn’t want us, fine. We’ll do things our own way and continue to live our lives without regard to whatever bulls**t you try to shove down our throats.

But the left lusts for power. Rush Limbaugh agrees: “These are the kind of people that demand loyalty, and when it’s not there, they’ll take care of it another way. Because when you boil it all down, they really don’t expect loyalty. They demand it. And if you don’t exhibit it, they’ve got other ways of dealing with you. … As I say, they’re not interested in persuading anybody. It’s beneath them. They want the power to deal with you regardless. Now they think they’ve got it. And what I’m trying to say here is that that power they think they have, I believe it’s tenuous.”

If I sound angry, I am. The only thing most Americans want is the ability to work, raise their children without liberal indoctrination, worship and otherwise live modest, quiet lives. The left has assured us those humble dreams are unacceptable, and now hundreds of millions of modest, quiet Americans are being reclassified as “domestic terrorists.” Fine. Whatever.

“Banning Trump from his often self-destructive Twitter addiction, smearing his supporters as racists, and bulldozing through a far-Left agenda will only ensure Trump a ninth life,” notes Hanson.”Americans hate one thing more than a sore loser, and that is an arrogant, vindictive – and bullying – winner. If Trump for now can finally exit office silently, and if his enemies continue to be loud, petty, vengeful and extremist, then the public will very soon make the necessary adjustments.”

Interpret that as you will. May the Farce be with you.