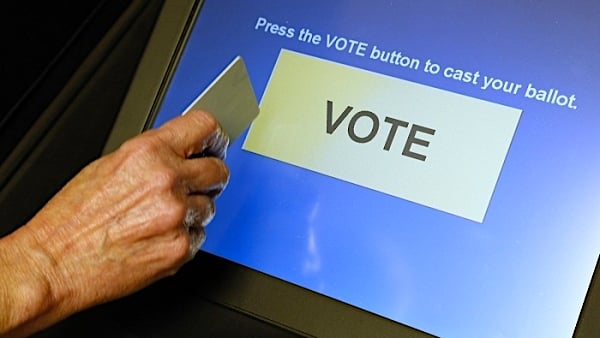 Big money payoffs from leftists to local election officials. Just ignoring state laws on absentee ballots. Suppressing accurate reporting about one candidate. There were a lot of outside influences on the 2020 presidential election.

And now the state police in Michigan have seized a voting machine in an investigation into whether that played any role in Joe Biden’s move up to the White House.

The Washington Examiner reports that were claims in Michigan that outside individuals had obtained unauthorized access to a voting machine.

Barry County Clerk Pamela Palmer explained to CNN that one of the tabulators that now has been seized was from Irving Township, but she said the alleged security breach didn’t have any impact of the 2020 results.

It was several weeks ago that Michigan Secretary of State Jocelyn Benson called on the state’s attorney general and police to review claims that that “third party” had gotten into the voting system in Roscommon Country.

Then Michigan State Police Lt. Derrick Carroll said the investigation had been widened to include more counties.

The Examiner reported, “At least one third party allegedly gained access to tabulation machines and data drives in Richfield Township and Roscommon County, Benson’s office said in a statement in February. If it did, the equipment would be required to be replaced with taxpayer’s money, the statement warned. Contracts with voting system vendors and state law restrict access to voting equipment to qualified personnel, Benson’s office said. Machines accessed by unauthorized personnel ‘may have exposed the machines to vulnerabilities that render them unusable in future elections,’ Benson’s office added.”

Benson, at the time, said in a statement that, “I will have no tolerance for those who seek to illegally tamper with our voting equipment.”

The state notably had issues at the time of the election in Antrim County, and Benson’s office confirmed a third party accessed a Dominion Voting Systems machine there earlier.

Those county results initially were given to Joe Biden, after after allegations of inappropriate actions, officials reversed the results, giving them to Donald Trump with the explanation there was a human error.

Trump said at the time, “We caught them. And they said, ‘Well, we made a little mistake.’ It wasn’t a mistake at all. It was being caught.”

Matthew DePerno, a Republican candidate for Michigan attorney general, became the face of the battle as a lawsuit on behalf of client William Bailey charged the county voting machines had been hacked and were changing votes.

The Examiner report said, “State and county officials have blamed human error, a failure to update software properly across the county, for the mishap. The case was dismissed last year by 13th Circuit Judge Kevin Elsenheimer after the plaintiffs were allowed to proceed with a ‘forensic audit’ of the Dominion Voting Systems machines in the county on Dec. 6, 2020.”

That report suggested an error rate of more than 68% by the machines, which was rejected out of hand by officials with Dominion, who have sued numerous defendants for making allegations about their machines’ faults or failures.

DePerno said he continues his fight for “election integrity” in the state.

Benson’s move came just about the same time that the Cybersecurity and Infrastructure Security Agency, inside the Department of Homeland Security, reported it was reviewing claims of vulnerabilities in Georgia’s voting equipment, a system that also uses Dominion equipment.

J. Alex Halderman, a professor of computer science at the University of Michigan, wrote a report about the vulnerabilities in election technology but said in Michigan it was human error that led to Antrim County reporting the wrong results.

What is known about the 2020 election is that one study found that the $420 million from Mark Zuckerberg given to local election officials, purportedly to help them cope with COVID but actually used to turn many elections offices into Democrat get-out-the-vote facilities, likely “bought” the White House for Biden.

Further, many officials did simply ignore their state law requirements for mail-in or absentee ballots.

And legacy and social media worked together, just days before the vote, to suppress accurate – but very damaging – reporting about the Biden family’s international business schemes that likely included Joe Biden.