He was taking tens of thousands of dollars a month from a Ukrainian gas company that was under investigation for corruption when his father was in charge of U.S.-Ukraine issues under Barack Obama.

Here’s Joe Biden boasting about how he ordered Ukrainian officials to get rid of the prosecutor investigating Burisma, and his son.

Details from a laptop computer Hunter abandoned at a repair shop also have raised questions about his getting payments from Chinese and Russian interests.

Then there’s his recent sales of his amateur artwork for tens of thousands of dollars, and questions about just what the buyers were purchasing.

Now Fox News is reporting that Miranda Devine, a columnist from the New York Post who has documented more of Hunter’s scandals that probably anyone else, has issued a new alarm.

That is about a “particular email from Hunter Biden’s laptop relating to Ukraine.”

She said, on “Tucker Carlson Tonight” that it should be “cross-matched” with classified materials concerning Ukraine, the United Kingdom and Iran – classified documents that were “found” at Joe Biden’s home at Wilmington, Delaware.

She explained, the report said, “it is interesting to note the connection at least on a subject-matter level between what has been revealed about the first tranche of classified documents found at Biden’s Greenville, Delaware, estate, and the email between the first son and his then-business partner Devon Archer.”

The April 13, 2014, email came a week before Joe Biden, then VP, was scheduled to meet with then-Ukrainian Prime Minister Arseniy Yatsenyuk.

Carlson noted the email said, “The strategic values to create a land bridge for RU [Russia] to Crimea. That won’t directly affect Burisma holdings, but it will limit future UK exploration and utilization of offshore opportunities in particular. It will also further destabilize the UK nationally and for whatever government is in power and the US will respond with even stronger sanctions. Those sanctions will threaten the tenuous support of the EU, which does not have the political will to incur steep energy price increases…”

That, Devine explained, sounds like the contents of a “classified document,” and was not the typical language found in Hunter Biden’s many other found emails.

Devine explained to Carlson, “There’s information in there that is not readily available. He sounds very knowledgeable and very breezy about it. And you have to remember that this is at a time – a month before he joined the Burisma board. He needed money desperately, to feed his drug habit, and they were going to pay him $83,000 a month to do not very much.”

She noted that had Hunter been given access to classified documents, that would drive “his price much higher.”

It should be simple for authorities to confirm whether Hunter Biden had access to the classified documents that were stored in his father’s garage, as Special Counsel Robert K. Hur could cross-match that email and other information on the laptop with the Delaware documents.

She noted that the public already has been told classified documents found in Joe Biden’s possession related to the U.K., Ukraine and Iran.

She explained it might be a “guess” now, but “it’s a pretty obvious connection.” 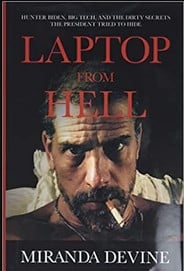 SPECIAL OFFER: Get Miranda Devine’s sensational bestseller,
“Laptop From Hell: Hunter Biden, Big Tech, and the Dirty Secrets the President Tried to Hide,” documenting the astonishing secrets contained in Hunter Biden’s laptop that exposed the Biden crime family and ignited one of the greatest media coverups in American history – at a reduced price at the WND Superstore!