Musk no fan of 'far right,' but say 'far left' 'hates everyone'

Elon Musk already has sent progressives into shock with his purchase of Twitter and his not-at-all-veiled references to free speech returning to the industry-leading social media site.

That alone could disrupt the entire liberal strategy for America’s future, as for years now Twitter has been a leading site for suppressing conservative thought, and amplifying the Democrats’ agenda.

But now he’s gone further, stating online that “By ‘free speech’, I simply mean that which matches the law. I am against censorship that goes far beyond the law. If people want less free speech, they will ask government to pass laws to that effect. Therefor, going beyond the law is contrary to the will of the people.”

Further, he confirmed he’s no fan of the “far right,” but charged that “the far left hates everyone, themselves included.”

And he posted online a cartoon showing himself as slighty to the left of center, close to his “fellow liberal,” in 2008. By 2012 the “left” was running away from him and he was AT the center. 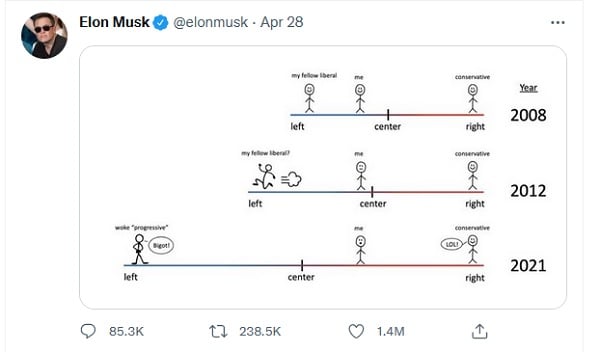 In 2021, he was to the right of center, with “woke ‘progressives'” standing at the edge of the scale calling others “bigot.”

Fox News said there was a liberal “melt down” over Musk’s comments.

“New Twitter owner Elon Musk broke leftist brains with tweets Thursday accusing the Democrat Party of moving way too far to the left and being ‘hijacked by extremists,'” the report said.

“Adding more insult to injury, Musk then stated that the Democratic Party is being run by the extreme left. In response to writer Tim Urban’s assessment of Musk’s graph, the billionaire declared, ‘I strongly supported Obama for President, but today’s Democratic Party has been hijacked by extremists.'”

And MSNBC analyst Jonathan Alter wildly tweeted, “Given his new purchase, this is an ominous tweet by @elonmusk and a poorly-informed one. One of our major political parties has become a white grievance party that is set to renominate an authoritarian, pro-Putin demagogue who tried to stage a coup. It’s not the Democrats.”

The New York Post explained that while Musk considers himself relatively liberal, the extremists see him as a “bigot” because they are so far to the extreme.