An author and reporter for a popular news site in Israel says “the Temple of the antichrist” already exists, and is standing right now amid Muslim structures on Jerusalem’s Temple Mount.

The stunning claim comes from Adam Eliyahu Berkowitz, senior reporter for Israel365 News, who has just released a semi-fictionalized book titled “The Master of Return and the Eleventh Light,” providing a “personal look inside the world of the ultra-Orthodox settlers and how they are doing intense personal spiritual work to bring the final redemption – and how the Arabs are murdering us for precisely that reason.”

In an interview for the book, Berkowitz took direct aim at the end-times view many Christians hold.

“I hear the Christians talk about the antichrist and the fake Temple that will arise in the end of days,” Berkowitz said.

“Christians used to believe this was the Vatican, which I can understand. Rome stole all the Temple vessels and the Vatican is patterned after the Temple. The Vatican and the Jewish Temple cannot coexist because the Vatican came to replace the Temple.”

Berkowitz, 60, was previously a motorcycle-riding chef in Manhattan’s haute-cuisine restaurants before moving to Israel in 1991, where he served as a combat medic in the Israeli Defense Forces and studied Jewish law to receive rabbinical ordination in the Jewish state.

His new book is told against the turbulent political backdrop of modern Israel and the developments that many believe are bringing the prophesied Third Temple.

Berkowitz explains the reporter, called “Eli” in the novel, is conflicted about writing news articles, and is shocked when he discovers his news service caters to evangelicals who want to hear about news from a “prophetic” angle.

Regarding the “semi-fictional” technique of the book, he noted: “It is all true, but not all of it happened exactly like I wrote it. As one of my rabbis used to say, it is true on the inside but maybe not so much on the outside. I have never really written about myself before and it may sound strange, but all the things that happened to me and around me weren’t really about me anyway.

“Jews in Israel are taking part in a new chapter of the Bible. As a journalist, I stand aside and report what I see. As a novelist, I write it as a story. Everything in the book happened pretty much the way I wrote it. But I actually took two separate periods of my life and mashed them together. To be honest, the more amazing and unbelievable parts of the book are told more accurately.”

Asked if his book is anti-Arab, Berkowitz said: “Absolutely not. I don’t think I wrote a single anti-Arab thing. They do murder Jews but I don’t see Arabs as inherently evil or the source of Israel’s troubles. People who are on the outside think that ‘settlers’ (I use that term grudgingly) hate Arabs and live where they do in order to have a constant supply of fresh Arab children to eat for breakfast.

“I lived in Gush Etzion for 15 years and I can assure you that every single Jew who lives there does so at great personal expense for one reason; they love the God of Israel. That is the message of the book and I think that is the aspect of Israel that the media refuse to present. People who support Palestinians don’t care how much suffering they bring to the Palestinians. But they absolutely oppose the Bible and the possibility that God is keeping his covenant with the children of Jacob.”

Berkowitz says he winces at the term “settlers” because it’s “part of the anti-Israel propaganda arsenal.”

“Why not call them Israelis? Calling them ‘settlers’ makes it sound like the Jews just arrived and delegitimizes our connection to the land. ‘Occupied territories’ is grossly inaccurate, actually a lie, and is horrible. ‘The West Bank’ is a term that actually makes me laugh. It refers to a period when Judea and Samaria were illegally occupied by Jordan. Any journalist who claims that the Temple Mount is the third holiest site in Islam is lying and nothing he says can be believed.” 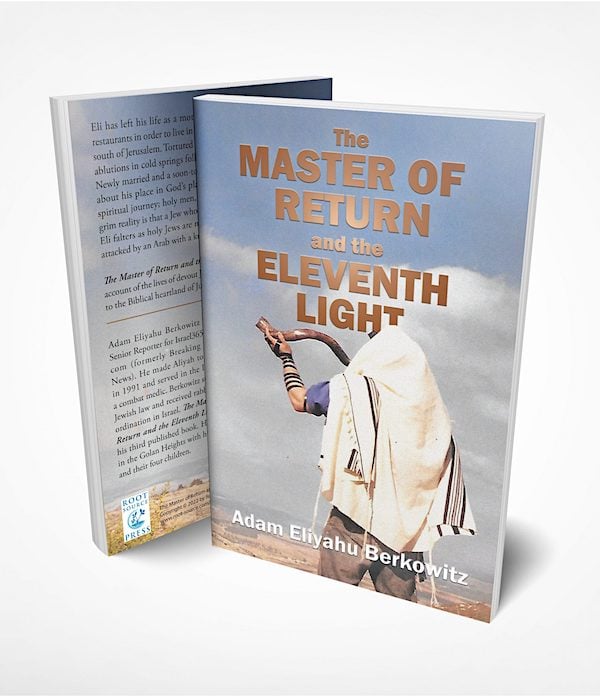 When it comes to matters of the Temple of God being reconstructed in Jerusalem, Berkowitz says Jews in America never talk about that.

“Of course. They are in exile,” he indicated.

“The entire world right now is focused on Jerusalem. Even [Ukrainian President Volodymyr] Zelenskyy wanted to come to Jerusalem to negotiate with [Russian President Vladimir] Putin. That is what Jerusalem is. The dark side is trying desperately to prevent Jerusalem from becoming what it should be, what God intended. The U.N. and the International Criminal Court, even the World Health Organization, are fake Sanhedrins.”

“Jews in Israel are waking up to the Temple Mount,” Berkowitz continued.

“We learn the Torah constantly and it is impossible to do so and keep the law while ignoring how much of the law is centered around the Temple service. But the Temple service was integrally dependent on the land and the agriculture. Israelis are waking up to it, but American Jews, and I mean specifically religious Jews, have no clue, or even the possibility of understanding the Temple since they have intentionally taken themselves out of the framework of the covenant, which is focused on the land. They are like the spies who despised the land and were therefore deemed unworthy to be part of the covenant.”

Much of what Berkowitz reveals contradicts the mainstream media narrative about events in the Holy Land.

He says other authors are having their works dismissed by publishers if they mention Jews suffering from Arab terrorism, not going along with the narrative of Palestinians suffering under the “occupation.”

“The public is being intentionally lied to,” Berkowitz said.

“I strongly suspect many people prefer a lie that confirms their beliefs. But I can’t sit idly by and allow the lies to go unchallenged. I have always been the fool on the hilltop screaming out the uncomfortable truth no one wants to hear. It is unpopular but it is all I know how to do, so I am still doing it.”