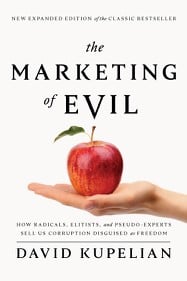 For years it’s been viciously attacked as “hate speech,” “despicable,” “the worst book ever” and “serving the Antichrist” – even formally condemned by faculty vote at one university, resulting in lawsuits, campus hysteria and national news coverage. Others say it has genuinely changed their lives for the better, with one conservative leader calling it “one of the most important books of the last 20 years.”

In any event, I’m pleased to announce that “The Marketing of Evil” has just been re-released in an expanded paperback edition including brand-new chapters explaining exactly how today’s truly unprecedented level of insanity, psychosis and evil has been skillfully sold to America.

In case you’re unfamiliar with it, “The Marketing of Evil” essentially explains why and how so many millions of today’s Americans have come to strongly embrace and defend ideas and behaviors that horrified every previous generation of Americans since its founding.

As I write in the book’s introduction, “Within the space of our lifetime, much of what Americans once almost universally abhorred has been packaged, perfumed, gift-wrapped, and sold to us as though it had great value. By skillfully playing on our deeply felt national values of fairness, generosity, and tolerance, these marketers have persuaded us to embrace as enlightened and noble that which every other generation has regarded as grossly self-destructive – in a word, evil.”

The book has had a storied and sometimes tumultuous history, including, for example, becoming the focal point of a national scandal when several openly homosexual professors at Ohio State University brought “sexual harassment” charges against head librarian Scott Savage, a Christian, after he recommended “The Marketing of Evil” as required reading for all incoming freshmen. The gay profs maintained that merely recommending the book constituted an act of “harassment due to sexual orientation.” (Chapter 1 documents, in LGBT leaders’ own words, their brilliant but little-known strategies for mainstreaming total sexual/gender anarchy in what was a largely Christian country.)

The other faculty members were so intimidated by the enraged gay professors that they either voted in agreement with them or abstained out of fear. It was so bizarre that major media exposure by Sean Hannity, Brit Hume on Fox’s “Special Report,” the New York Post, Human Events and others – plus strong legal pressure from the Alliance Defending Freedom – caused the university to cave and drop the absurd charges.

As a direct consequence of being publicly branded “hate literature” and “homophobic tripe” by the OSU faculty, “The Marketing of Evil” immediately became one of the hottest-selling books in the country, topping Amazon’s daily “Current Events” bestseller chart.

‘It changed my life!’

On Amazon the controversial book has garnered over 600 five-star reader reviews, plus a few nasty one-star reviews describing the book as “horrendous” and “truly despicable” and accusing me personally of being a “Nazi,” “scum” and “social blight.” Whatever. The vast majority are much kinder:

As a result of such notoriety, both positive and negative, “The Marketing of Evil” eventually lit a fire in a place where it was more welcome – the nation’s churches. From small-town churches and prayer groups to one of America’s largest congregations, Christian leaders and laymen started getting hold of the book, sometimes by the case, to hand out to fellow churchgoers.

The late D. James Kennedy, who until his death was perhaps the world’s most influential Presbyterian minister and founder of D. James Kennedy Ministries (formerly Coral Ridge Ministries) in Fort Lauderdale, Fla., called “The Marketing of Evil” a “powerful new book that I wish every Christian in America could read.” He even took the dramatic step of printing 15,000 special-edition softcover copies which he sent to thousands of supporters.

Despite the ongoing controversy over this book, many conservative and Christian voices have been kind enough to single out “The Marketing of Evil” as essential reading:

One more quick story: In 2017, “The Marketing of Evil” was featured in the Hollywood movie “I am Michael” starring James Franco and Zachary Quinto.

In this amazing true story, Franco, playing the lead role of high-profile LGBT activist Michael Glatze, is shown reading “The Marketing of Evil” during the pivotal scene in which Glatze publicly renounces his “gay” identification and reveals he wants to live for God. The real-life Glatze, who left the homosexual lifestyle in 2007 and become a happily married Christian pastor, has said reading “The Marketing of Evil” played a significant role in helping him in his dramatic personal journey.

So, those are some highlights of my own journey with this book. As I said at the outset, I’m happy to announce that the new, expanded edition of “The Marketing of Evil” is now available on Amazon, Barnes & Noble and elsewhere. In the brand-new chapters, I dive right into the Trump and Biden eras, shining a bright light on the secret workings of today’s “marketers of evil” who figured out how to convince so many Americans that the least racist nation on earth is somehow actually the most racist, that Trump is comparable to Hitler, and so on. But even more fundamentally, I explore and document how the Left is able to brainwash huge numbers of people into believing – and acting on –  literally anything, no matter how obviously insane, destructive or evil.

Fortunately, once the light goes on, their dark games don’t work so well. And believe me, we need the light to shine in our country right now, more than ever.

* GET THE BRAND-NEW EXPANDED EDITION OF “THE MARKETING OF EVIL” NOW!

* FINALLY, get the acclaimed sequel, “How Evil Works,” as well as Kupelian’s most recent bestseller, “The Snapping of the American Mind: Healing a Nation Broken by a Lawless Government and Godless Culture.”