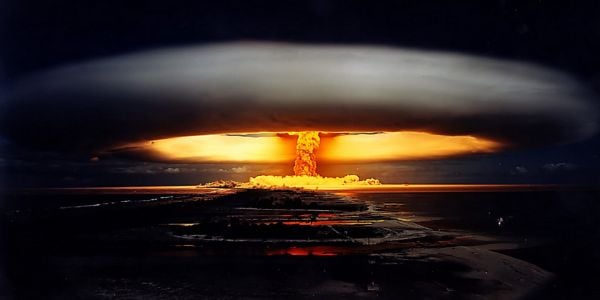 Wait! What! Is there something people should know?

New York City has triggered a wave of outrage online by releasing an instruction video on what to do after a nuclear attack.

“Just know that the big one has hit,” the video instructs, before giving a lesson on getting inside and staying away from radioactive debris.

A commentary at Twitchy, explained, “New York City has all sorts of laws restricting your right to purchase and carry a handgun, but say someone sets off a nuke (President Eric Swalwell, maybe). We’re not sure why New York City’s Emergency Management Department went with the green-screen treatment here, but they thought they’d better put together tips on what to do if there’s a nuclear attack. There are just three steps: get inside, stay inside, and follow whatever media hasn’t been knocked out by the blast.”

According to the New York Daily News, “City Hall wants you to be ready for anything — even a nuclear attack. The New York City Department of Emergency Management released a new public service announcement this week to help New Yorkers prepare for the unthinkable: the detonation of an atomic bomb.”

The 90-second video instructs New Yorkers to get inside, stay inside, and stay tuned.

“Anyone who was outside when the blast hit should remove and bag all clothing to avoid the danger of nuclear contamination or radioactive dust and debris,” the report explains. And for sure, “Stay indoors until officials say it’s safe to come outside.”

The responses, however, were far from serious.

There was the one about pronouns:

And previously nuke-avoidance instructions from the movies:

Don’t forget to buy a fridge that you can fit in. pic.twitter.com/X1mxdpIAB5

At Gizmodo, under the headline “Apocalypse Whenever,” Kevin Hurler explained, “Sometimes it feels like we’re closer than [ever] … to the end of the world, and apparently New York City Emergency Management feels the same way, as the city department released a nuclear attack survival guide.”

Hurler continued, “This PSA is not the first oddball public education attempt by a New York City office in recent memory. Earlier this month, the New York City Department of Sanitation released a tongue-in-cheek TikTok to their official account modeled after those famous ASPCA ads with Sarah McGlaughlin speaking on behalf of sad dogs. ‘Will you move your car? Every day litter gets on the streets of our city, and it’s crying to be cleaned up,’ says Department of Sanitation Commissioner Jessica Tisch in black-and-white over McGlaughlin’s ‘In the Arms of an Angel.’ The TikTok urges residents of the city to move their cars away from curbs on days where Department of Sanitation street sweepers prowl the concrete jungle. The video has since gathered over 140,000 views since it was posted.”