A New York Times reporter who claimed the Jan. 6, 2021, riot at the Capitol in Washington was “a violent interruption to the transition of power in American history” privately believes the events were “fun” and that the media is “making too big a deal.”

The revelations about the opinions from the Times’ national security correspondent, Matthew Rosenberg, a Pultizer-winning reporter, came through an undercover video released by Project Veritas.

The organization charged that what Rosenberg has been writing for the publication is in direct contradiction to what he believes. 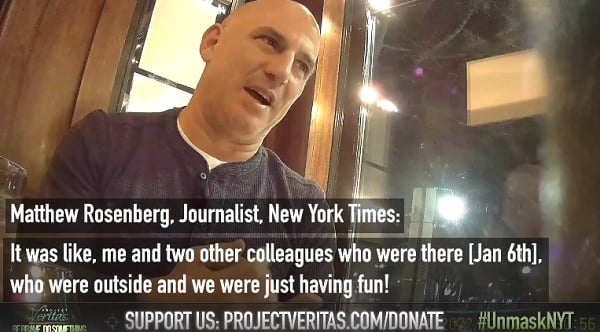 “This was not the only time Rosenberg’s commentary to Project Veritas’ undercover reporter directly contradicted his own published words. Despite telling a Veritas journalist that January 6 was ‘no big deal,’ his article says that downplaying the events of that day was ‘the next big lie,'” Project Veritas reported.

In fact, in the video, Rosenberg claims, “It’s not a big deal as they [media] are making it, because they were making too big a deal. They were making this an organized thing that it wasn’t.”

Project Veritas founder James O’Keefe pointed out Rosenberg’s article, “The Next Big Lies: Jan 6 was No Big Deal, or A Left-Wing Plot,” was written about the same time he was making “contradictory statements” to Project Veritas.

He said,” It was like, me and two other colleagues who were there outside and we were just having fun.”

He also explained, “I know I’m supposed to be traumatized, but like, all these colleagues who were in the [Capitol] building, and are like, ‘Oh my God it was so scary!’ I’m like, ‘f— off!’ I’m like ‘Come on.’ It’s not the kind place I can tell someone to man up but I kind of want to be like, ‘dude come on, you were not in any danger.'”

The video (Be advised of offensive and objectionable language throughout):