Prof: Trump's support from minorities due to 'multiracial whiteness' 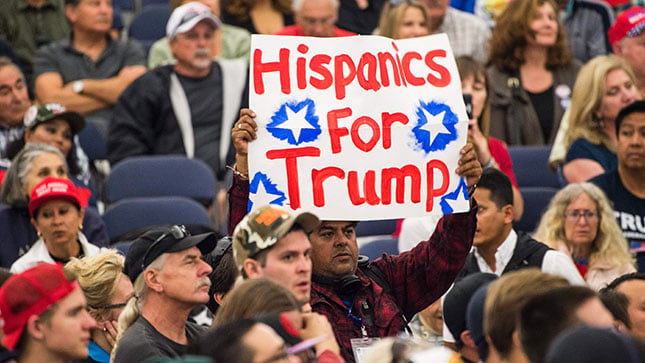 In Starr County, Texas, which is 96% Hispanic, for example, Joe Biden won by only 5 points, a swing of more than 25 points from the 2016 election, noted Republican activist Rachel Campos-Duffy in an article for The Federalist.

Nearby Zapata County, Texas, which is 85% Hispanic and historically Democrat, has turned Republican, increasing its support for Trump by 15% since 2016.

So how can legacy media continue to insist that Trump is racist?

It’s because minorities in America now are subscribing to “multiracial whiteness.”

That’s according to New York University history professor Cristina Beltran, who wrote in the Washington Post, “To understand Trump’s support, we must think in terms of multiracial whiteness.”

“Yes, Trump’s voters – and his mob – are disproportionately white, but one of the more unsettling exit-poll data points of the 2020 election was that a quarter to a third of Latino voters voted to reelect Trump,” she wrote, noted Powerline blogger John Hinderaker.

“Many black and brown voters have family and friends who fervently backed the MAGA policy agenda, including its delusions and conspiracy theories,” Beltran wrote. “… I call this phenomenon multiracial whiteness – the promise that they, too, can lay claim to the politics of aggression, exclusion and domination.

“Rooted in America’s ugly history of white supremacy, indigenous dispossession and anti-blackness, multiracial whiteness is an ideology invested in the unequal distribution of land, wealth, power and privilege — a form of hierarchy in which the standing of one section of the population is premised on the debasement of others,” the professor wrote.

She said “multiracial whiteness” is “a discriminatory worldview in which feelings of freedom and belonging are produced through the persecution and dehumanization of others.”

At The Federalist, Campos-Duffy said it appears Beltran considers “white” no longer a skin color but a “political color.”

“In other words, if you are a black or brown person who voted for Trump, you are a self-loathing white supremacist,” they explained.

The rationalization is required, they wrote, because the left “painted Trump and his supporters as racist, but this narrative became unconvincing after Trump outperformed Mitt Romney with Hispanics in 2016 and increased his numbers in the 2020 election.”

“While Beltrán is one of few leftists to acknowledge Trump’s appeal to minorities, she clearly made no attempt to understand why they support him, summing up the ‘MAGA movement’ as the ‘the wild freedom of unbridled rage and conspiracy theories,'” Campos-Duffy wrote.

The article pointed out Trump delivered on his promises of improving the economy, with unemployment for Hispanics in September 2019 down to 3.9%.

“In the pre-lockdown Trump era, Hispanics experienced reduced rates of unemployment and poverty, increased rates of homeownership, and rising family median incomes. His business-friendly policies helped Hispanics, who are America’s most entrepreneurial demographic, starting businesses at three times the rate of the general population,” she wrote.

“While Trump defended law and order, Democrats excused violent Black Lives Matter and Antifa riots all summer, which disproportionately affected poor black and Hispanic neighborhoods. Democrats refused to call in the National Guard to protect small businesses, leaving many of them defenseless and destroyed,” she wrote.

Hinderaker said: “It turns out that you no longer have to be white to be white. ‘White’ basically means that you don’t swallow the nonsense being ladled out by the far Left. So, happily, people of all colors are now ‘white, according to liberals.

“Is that unity and inclusion, or what?”