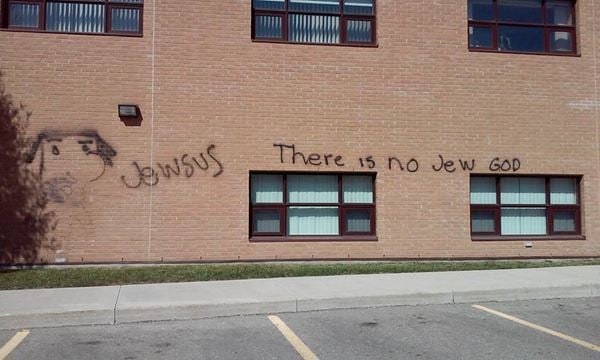 A new report from the Family Research Council reveals that there were more than 400 “acts of hostility” against churches in the United States between the beginning of 2018 and this fall.

The attacks occurred in 45 different states and Washington, D.C., and the largest part of those were “pro-abortion acts of hostility.” There also were acts of vandalism, arson, gun-related incidents, bomb threats, assaults and interruption of worship services.

The report, titled “Hostility Against Churches Is on the Rise in the United States,” explains, “Criminal acts of vandalism and destruction of church property are symptomatic of a collapse in societal reverence and respect for houses of worship and religion – in this case, churches and Christianity. Americans appear increasingly comfortable lashing out against church buildings, pointing to a larger societal problem of marginalizing core Christian beliefs, including those that touch on hot-button issues related to human dignity and sexuality.”

The FRC explained, “A total of 420 acts of hostility against churches occurred between January 2018 and September 2022 across 45 U.S. states and Washington, D.C. There were at least 57 pro-abortion acts of hostility against churches from January 2022 to September 2022. FRC documented 342 occurrences of vandalism, 58 arson attacks or attempts, 12 gun-related incidents, 11 bomb threats, and 19 other incidences (assault, threats, interruption of worship services, etc.). Twenty incidents (4.76 percent) fell into more than one category.”

The report there were the biggest number of attacks in California, with 51, followed by Texas, at 33, New York, 31, and Florida, 23.

“Violent or destructive incidences that interfere with an individual’s lawful free exercise of religion at their house of worship present a significant nationwide challenge and must be condemned,” the report said.

“As a former commissioner and chairman of the U.S. Commission on International Religious Freedom (USCIRF), I’ve seen the warning signs of this gathering like clouds across the Atlantic,” noted Tony Perkins, the FRC president. “As the mainstream culture moves further and further away from a biblical worldview, I’ve witnessed the hostility to moral truth creep closer to our shores. The West, once the safe haven of free speech and religion, is turning cold to our religious foundations that have helped us thrive.”

He said the U.S. administration, now led by Joe Biden, “must do more.”

“The Biden Department of Justice has so far largely ignored these growing attacks on churches and that is creating an environment of lawlessness around the country,” he warned.

“Christians must not live in fear. We must not be intimidated; we must continue to stand upon the truth of God and defending the freedom of all to live out their faith free from the fear that they will be subject to a violent attack,” Perkins said.

Arielle Del Turco, FRC’s assistant director of the Center for Religious Liberty and author of the report, added, “The problem of acts of hostility against churches in the United States is widespread and growing. This is not a trend that should be shrugged off. When churches are targeted for acts of destruction, arson, or threatening messages, it has the potential to be intimidating–and sometimes that’s the intention.

“Within the past few years especially, outpourings of political anger have sometimes correlated with vandalism and other acts against churches. When faced with such blatant violence and disrespect against churches (and religion more broadly), our response must be to condemn these acts and reaffirm the right of all people to worship and live out their faith freely — including the freedom to live without fear that they will be the next target of such an attack,” she said.

The report noted the FRC was not the only organization confirming such violence.

“The Federal Bureau of Investigation keeps records of hate crimes in the United States, including those motivated by an anti-religious bias. In 2021, the most recent year with available data, the FBI reported 240 anti-Christian ‘hate crimes’ (the FBI uses the following categories for Christianity: Catholics, Protestants, Eastern Orthodox, and ‘other Christians’). This was up from 213 anti-Christian incidents in 2020. There seems to be a general upward trend over the past few years: the FBI reported 217 anti-Christian incidents in 2019 and 172 in 2018.”