After relentless opposition both on and off the set for more than three years, the movie “Roe v. Wade” – promising to tell the true story behind the landmark decision that established a “right” to abortion – is set for release Friday.

Shunned by Hollywood, the independent production features the directorial debut of Cathy Allyn and Nick Loeb, who also filled the roles of producer, co-writer and lead actor.

The movie will be streaming on Amazon, iTunes and Google Play, and via on-demand on cable and satellite. It premiered at the Conservative Political Action Conference in February.

Loeb and Allyn began as co-producers but were forced into directing duties when the film’s director and first assistant director quit. In 2018, Loeb recounted to the Hollywood Reporter the abrupt departure of the electrician and others, including the costumer, upon discovery of the film’s approach to the controversial subject.

Loeb said he and his team also were banished from several filming sites, including Louisiana State University, Tulane University and a New Orleans synagogue.

In January 2018, as WND reported, Facebook blocked access to a crowdfunding site for the movie. Loeb told WND at the time he believed the content of the film clearly was the reason. A year later, Facebook rejected an ad for the movie.

Loeb noted to WND that when the seminal case that ultimately upheld the Roe decision, Planned Parenthood v. Casey, was underway, a made-for-TV movie called “Roe vs. Wade” was broadcast “to try to influence the case.”

“We’re doing to them what they did to us for years,” he told WND.

Loeb said his movie could help overturn Roe, “once people see how it got decided.”

The film depicts the Supreme Court justices being influenced by the media and their families while relying on biased sources with unreliable data.

“Some of their families were working for Planned Parenthood at the time, and they didn’t truly look at the case from a constitutional perspective,” Loeb said.

‘We tried to just lay out the facts’

In interviews, Loeb has said he “tried not to be preachy.”

“We tried to go down the middle of the road. We tried to just lay out the facts,” he told CBN.

However, Newsmax’s Michael Clark was among reviewers who believe that while the filmmakers get the facts right, wearing “three filmmaking hats (or in the case of Loeb, four) the first time out of the gate was a misguided endeavor.”

“The film feels rushed trying to cover as much history as possible. The performances, at times, remove you from the experience. Lines seem hesitant or forced. And in the most important moments the performances do not translate,” he wrote.

Clark said there are “a few passable performances” but “not enough to win over a balanced crowd.” He gave a tip of the hat to Dash, the cast of judges and to actors Mindy Robinson, Tom Guiry, Jamie Kennedy and Greer Grammer.

Nevertheless, Michael J. New of Catholic University of America said the movie “should convince viewers that pro-life efforts continue to be a worthy goal.”

New, a research associate at the university and an associate scholar at the Charlotte Lozier Institute, noted that “despite the visibility and impact of Roe v. Wade, few people know the whole story behind this Supreme Court decision.”

“As such, the Roe v. Wade movie does a fine job providing some important and overlooked details,” he writes.

The movie’s website provides a fact check of some of its controversial claims:

The movie opens with Sanger speaking to members of the Ku Klux Klan about her “Negro project” initiative aimed at reducing the growth of African-American population in the United States.

Nathanson was co-founder in the 1960s of NARAL – originally known as the National Association for the Repeal of Abortion Laws – and the director of an abortion clinic in New York City for which he oversaw tens of thousands of abortions.

The opposition to the abortion activists is led by the film’s protagonist, Mildred Jefferson, the first African-American woman to graduate from Harvard Medical School, who believed “that she became a doctor to protect life, not destroy it.” 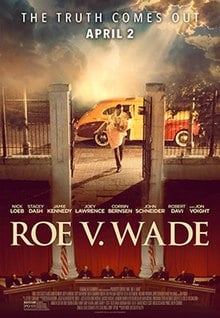 Nathanson’s change of mind and heart comes after seeing an unborn child through new sonogram technology and his Christian conversion.

‘There’s a baby there’

Asked what he hopes the audience takeaway will be, Loeb said in an interview with the Hollywood Reporter in February he wants people “to take away the truth.”

“These are the facts of what happened. I want them to understand how Roe came to be,” he said.

Loeb said a pro-choice actor “was converted during the movie.”

“He became pro-life when he learned more about the life of a baby,” Loeb said.

He said the Roe v. Wade case “gets thrown around all the time without a full understanding of how it came to be and what happened.”

“I really want people to understand, whether they’re pro-choice or pro-life, that when a woman gets pregnant, there’s a baby there,” he said.

“It’s not a clump of cells or a gob of goo. There’s a real living being that has a heartbeat in the first couple of weeks that you can hear,” said Loeb. “People should understand that so they don’t take abortion so lightly.”