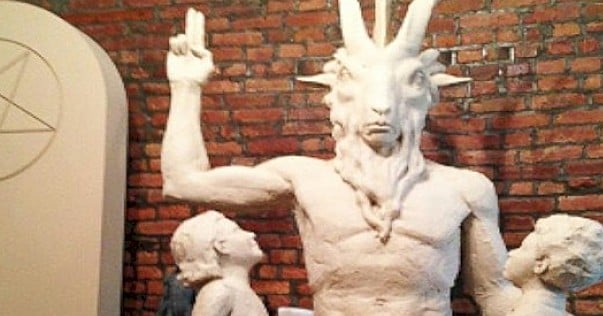 Among biblical teachings is that Satan fell because he considered himself the equal to God. He’s also described as deceiving people by presenting himself as an angel of light.

It seems his acolytes still are trying to present the message that Satan replaces God, as they have created a display in the Illinois capitol rotunda at Christmas this year featuring a “baby goat” you will not want to hold, according to the Washington Examiner.

It was members of the Satanic Temple of Illinois who erected the display in Springfield.

“This year’s tradition marks a greater urgency in the Baphomet’s message of harmony and reconciliation,” claimed Erin Helian, an official with the Satanic Temple.

It’s not the first time the Satanists have insisted on displaying their theology at the Christmas holiday, which recognizes the Christian faith. They’ve done so several times under legal requirements that governments not give preference to one religion over another.

The Examiner report said their display “features an infant version of the Satanic deity Baphomet,” in recognition of Sol Invictus, an ancient Roman holiday.

“The piece, designed by Albuquerque-based horror artist Chris Andres, was placed next to Springfield’s Christian nativity scene,” the Examiner said, and it immediately drew protests.

Among those was one from Springfield Bishop Thomas Paprocki who supervised the Christian nativity this year and said the Satanic display has “no place in this Capitol or any other place.”

Members of a Christian advocacy organization held signs nearby stating, “Satan has no rights.”

The Satanic Temple of Illinois in 2019 installed its display in the Capitol stating, “Knowledge is the Greatest Gift,” with a sculpture of a forearm of Eve from the Garden of Eden with an apple and a snake.

WND columnist Laura Hollis explained at the time, “Ah, the oldest trick in the Book. Satan is nothing, if not consistent. In the Old Testament book of Genesis, Satan appears in serpentine form, promising the first humans that if they listen to him and disobey God, they will ‘become like gods’ themselves, ‘knowing good and evil.’ Similarly, the ‘greatest gift,’ which The Satanic Temple proclaims on its Springfield, Illinois, statue, is ‘knowledge.’ The clear import is that the human race is better for the knowledge of good and evil. Alas, somehow, that ‘knowledge’ (however acquired) did not come with the ability to resist evil. Millions of human beings throughout history have suffered grievously at the hands of those who had much knowledge – and mastery – of evil.”

She noted the U.S. Constitution prohibits government discrimination, based on the First Amendment.

“How far can this constitutional protection be argued to extend? Can public schools be forced to permit satanic clubs for children? That was the position taken by The Satanic Temple in Seattle, Washington, in 2016, and the Tacoma, Washington, school board agreed, whereupon The Temple started the After School Satan Club at Point Defiance Elementary School,” she explained, noting the club at “one pitiable” member and it folded.

“There is something wrong when people argue that the U.S. Constitution obliges us to expose children – children – to evil. The drafters of that document – theists and deists all – would be horrified at such a perverted interpretation. (Modern satanists’ assertions that satanism ‘isn’t really evil’ are not credible – or even original. In the New Testament, Christ says, ‘(The devil) was a murderer from the beginning and does not stand in the truth, because there is no truth in him. … (H)e is a liar and the father of all lies.’ (John 8:22))”

She continued, “It is particularly galling to read these accounts at Christmastime, even as each year brings new stories about restrictions on the ability to celebrate Christmas. A school in Virginia announced in October that no Christmas carols would be performed at the winter concert if they had religious references or the word ‘Jesus.’ A principal at a grade school in Nebraska went even further, banning ‘Christmas or holiday specific themed activities’ (like making ornaments), as well as Christmas carols, Christmas music, Christmas movies or clip art, Christmas trees, Christmas-themed books, Santa Claus, reindeer, candy canes, and the colors red and green.”

Noting that it’s all done in the name of “inclusion,” she said, “Hello? It’s Christmas. The majority of the people in this country celebrate it. So “inclusion” means that the majority of Americans are excluded – precluded from references to the biggest holiday of the year in public places? But we must install a tribute to Satan in the seat of government because the Constitution demands it?”

That wasn’t even the beginning of the conflict in Illinois.

WND reported in 2013 that a former candidate for comptroller in Illinois made headlines by turning backwards a pro-atheism sign in the state capitol was fighting such “hate speech” against Christianity.

William J. Kelly got into trouble in 2009 when he turned around a sign that said: ‘There are no gods, no devils, no angels, no heaven or hell. There is only our natural world. Religion is just a myth and superstition that hardens hearts and enslaves minds.”

He said it was “hate speech because it attacked the faith of others.

He also noted the Constitution forbids “hostility” to religion, which is what he says the anti-religion posting represents.