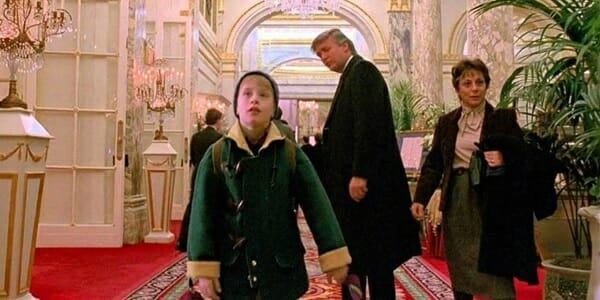 “Liberal snowflakes,” reports PJMedia, are insisting that old movies be edited to remove cameo appearances by Donald Trump before he became president.

One of the best recognized is his scene with actor Macauley Culkin in “Home Alone 2: Lost in New York.”

Among the offended are Twitter blue check Matt Navarra, who said, “I won’t rest until he is removed from that scene.”

Novelist Andrew Hunter Murray said, “He should be tried, imprisoned and digitally removed from Home Alone 2.”

PJMedia reported CBC TV in Canada already has cut the scene, insisting it was “edited to allow for commercial time within the format.”

The report likened the censorship to the novel “1984.”

The movie is distributed by 20th Century Studios, which now is owned by Disney.

PJMedia highlighted a montage of Trump cameos by College Humor that included appearances on “The Fresh Prince of Bel Air,” “Suddenly Susan,” “Spin City,” “The Nanny” and many other shows.