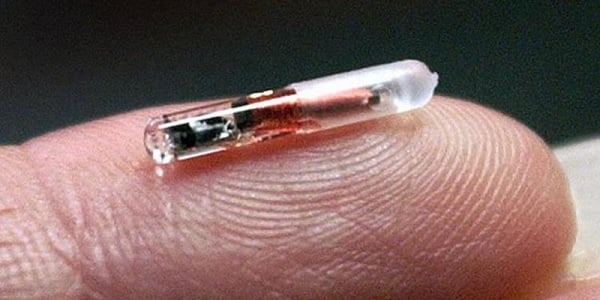 A columnist at The Federalist is warning Americans about the work in Sweden to implant microchips in people.

Because, “It won’t stop there,” explains Joe Allen.

He cited the recent video that profiled a Swedish organization, Epicenter, that was injecting microchips into employees.

They then can “open doors, pay cashless, present medical records, access concert venues, and ride public transportation” with the wave of a hand. A technical journal reported a couple years ago that at that time up to 100,000 people had implants already.

In the recent video, Hannes Sioblad, an officer for Epicenter, explained, “Right now it is very convenient to have a COVID passport always accessible on your implant.

“Naturally, some Christians see the Mark of the Beast. In a sane world, the idea of having your hand chipped to access public goods or private property—to receive a mark in order to ‘buy, sell, or trade’—should alarm anyone, regardless of religious persuasion. The same goes for using an implanted brain-computer interface to access the digital realm, as Elon Musk plans to do with Neuralink,” the column said.

But he said a “growing fringe” already thinks it’s normal.

A Nature analysis, for example, noted some 160,00 people around the world already have deep brain stimulation devices implanted, although most are for disorders like epilepsy.

“Of these devices, only 34 are true brain-computer interfaces. However, with current advances in technology, enormous injections of capital, and the U.S. Food and Drug Administration’s (FDA’s) recent approval, that number will rapidly climb,” he said.

That puts humanity on a direct path to a hybrid existence, he said.

“Since the first human-grade RFID implant was patented in 1997, followed by FDA approval in 2004, subdermal microchips have become just another device in a growing cyborg toolkit. Drawing on that cache, the Internet of Bodies paradigm has gained enormous traction among the medical establishment. At the extreme end, the concept of natural-born humanity is to be abolished,” he explained.

Those advocating include the U.S. Defense Advanced Research Projects Agency, which for years as “funded Human 2.0 projects,” World Economic Forum chairman Klaus Schwab in his books including “The Great Reset,” and a government report from Policy Horizons Canada which was called “Exploring Bioditigal Convergence.”

That states, “Digital technology can be embedded in organisms [and today] biotechnology may be at the cusp of a period of rapid expansion—possibly analogous to digital computing circa 1985.”

Just months ago the U.K. Ministry of Defense released, “Human Augmentation: The Dawn of a New Paradigm,” promising a link between tech and “human capability and behavior,” he explained.

“For people with any sense at all, the notion of having a microchip jabbed into your hand (or your head) triggers animal revulsion. Disturbing as it may be, a more immediate concern is the widespread use of non-invasive biometric systems,” the column said. “Wherever the New Normal takes hold, access to society is granted or denied on the basis of arbitrary ‘health and safety’ concerns. Today, it’s masks or vaccine status. Tomorrow, it could be ideology. Authorities don’t have to chip you if they can simply scan your smartphone and tell you to get lost, or lock you in your dwelling pod whenever ‘the numbers’ rise.”

He warned where the progress is taking humanity.

He said the extent of the work isn’t clear now.

“While I doubt any population will be forcibly chipped like wayward housecats—at least not in the near future—no nightmarish policy is truly off the table. In the past 21 months, the United States has seen mandated mRNA gene therapies, QR code-based vaccine passports, mass deletion of supposed ‘misinformation,’ and even drone surveillance to monitor social distancing.”