Taliban-run Bank of Afghanistan posts images of pallet of cash 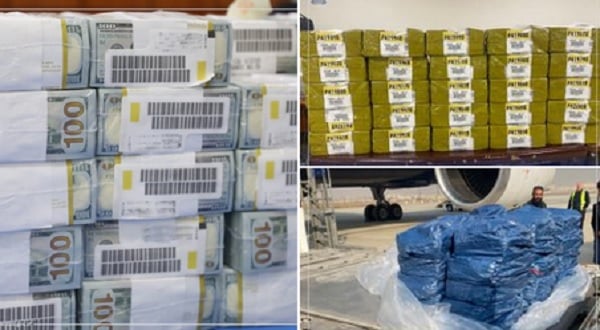 Americans still don’t have answers to many of the questions that arose because of Joe Biden’s abrupt, and extremely costly, pullout of American troops from Afghanistan.

Left behind were billions of dollars of American war machinery, weapons that now are under the control of the Taliban.

Further, hundreds of Americans were left behind, and thousands of Afghans who had been working in support of the American goals there.

Now there are reports of more costs.

According to a report that Breitbart classified under “national security,” the Bank of Afghanistan, like all else in the country now controlled by the terrorists in the Taliban, “posted several images to Twitter last week showing a large pallet of cash sitting on an airport runway.”

The report explained the images were of “humanitarian aid” that Afghanistan has been given.

It reportedly comes from “unspecified” donors.

The bank, Da Afghanistan Bank, said, “This is the second package that has arrived in Afghanistan this week.”

The organization’s officials expressed appreciation for any “principled action that leads to the transfer of reserves to the country and helps the needy people of the society.”

It said the cash was given “to a commercial bank in Kabul.”

According to the report, the organization has “made several nearly identical claims of receiving millions in foreign cash over the past few months, without ever specifying who made the donations. The amount cited by the bank in pallet-of-cash claims from September and November was also $40 million. In November, Da Afghanistan Bank claimed two $40 million pallets of cash received days apart were in addition to funds provided for humanitarian aid.”

The report also explained, “‘Pallets of cash’ became a sarcastic meme about irresponsible foreign policy after former President Barack Obama sent a gigantic amount of cash to Iran as ransom for four American hostages, and a down payment on his nuclear deal, in early 2016.”

Obama’s officials eventually confessed they sent an astonishing $1.7 billion to, as the report defined, “the terror masters.”

The U.S. government froze some $3.5 billion in Afghan assets when the nation fell to the terrorists. Joe Biden ordered that money unfrozen, but much has been sent to a fund that is supposed to be used only for humanitarian services.

The Taliban has said multiple times it wants cash to keep its economy moving along.

The United Nations and the bank both declined to respond to questions about who delivered the money and what it is for.