During Joe Biden’s appallingly divisive speech in Tulsa last week, he basically claimed little has changed in America since a century ago when millions of white supremacist Ku Klux Klansmen routinely lynched innocent black people for fun. “Millions of white Americans belonged to the Klan,” Biden insisted, and their “hate became embedded systematically and systemically in our laws and our culture.”

Got that? America is still a bastion of hateful, low-IQ, white-supremacist terrorists – and people of color aren’t safe anywhere.

Biden’s comments were carefully crafted by his handlers to stir up and incite racial guilt, resentment, fear and loathing in today’s Americans, who live in the least racist nation on earth.

Why do our elites keep doing this? There is a pattern.

Consider a few other vexing political-cultural issues currently ripping our country apart – and note the one factor uniting them all:

* There’s the COVID-19 pandemic and its attendant lockdown and mask mandates, plus the relentless campaign to pressure everyone to be vaccinated with an experimental drug even if they’re young and healthy and have virtually no risk from the virus, or are pregnant, or have recovered from COVID and thus already possess superior immunity to that which a vaccine could confer. Likewise, there’s the official demonization of early outpatient COVID treatments, including repurposed proven-safe-and-effective drugs like hydroxychloroquine and ivermectin, currently being successfully used by physicians and governments around the world to treat COVID patients and save countless lives, but officially disparaged and demonized in America;

* Then there’s “climate change,” which our elites assure us threatens the very existence of life on earth unless a radical new global “reset” is implemented within the current decade. It also serves as a pretext for the Biden administration’s total sabotage of America’s energy independence and destruction of thousands of high-paying energy jobs, as well as the adoption of deranged and astronomically expensive “Green New Deal”-type programs. At the same time, millions of school children are traumatically indoctrinated with scary predictions of near-term destruction, and many young couples are choosing not to bring children into such a doomed world;

* There’s our elites’ hysterical insistence that America is almost irredeemably racist – a state of unique national sinfulness that justifies and encourages revolutionary groups such as Black Lives Matter and Antifa to perpetrate an ongoing campaign of terror, intimidation, violence, arson, vandalism, monument-destruction, looting, assault and murder in cities throughout the country. These same groups also deploy menacing mobs to the homes of politicians, journalists and any others with whom they disagree – spray-painting curses and shouting threats at the home’s occupants. Meanwhile, America’s children are increasingly being taught to hate their own nation and internalize nonexistent racial conflict and guilt via Marxist “critical race theory” indoctrination;

* And there’s the related vilification of federal, state and local law enforcement as “systemically racist,” as well as the actual “defunding” of police departments, resulting in an immediate and utterly predictable rise in violent crime. With more than 2,000 police officers injured during the BLM riots in 2020 and 264 cops killed in the line of duty nationally during that same year – almost double the previous year’s death toll – a mass exodus from police departments is occurring via early retirement, relocation and career change, as well as a historic dearth of new recruits at police training academies. The biggest victims of all of this, by far, are poor urban minority populations – the very people BLM and other Marxist groups cynically pretend to care about. At the same time, George Soros-funded far-left district attorneys around the nation are busy releasing hardcore criminals – many convicted of violent offenses – from prison back into the general population;

* What about “cancel culture,” which, whether instigated by the “Twitter mob” or by giant multinational “woke” corporations, results in the rampant firing, boycotting, humiliating, “doxing” and “canceling” of innocent people – often destroying their lives – solely for expressing opinions contrary to the unhinged and destructive views of today’s radical left;

* Likewise, out-of-control tech monopolies like Google, Facebook and Twitter are daily banning, censoring, de-platforming, de-monetizing and otherwise suppressing conservative, Christian and pro-life expression. After all, if they could permanently ban a sitting president of the United States and leader of the free world, which they did with impunity, then they can ban literally any person, entity or expression at any time for any reason or no reason – amounting to complete totalitarian control of America’s most prized constitutional right, the freedom of speech;

* The ruling class insists that deeply confused and deranged men must be allowed to use women’s restrooms, showers and changing rooms and to dominate and destroy women’s athletics. And how do they induce normal everyday Americans to embrace something so obviously insane and dangerous? Simple. By branding everyone who refuses to pretend biological men are women and vice versa, and who objects to using their “preferred pronouns,” as deeply hateful transphobic bigots – and possibly criminals as well;

* And of course there’s the demonization of conservatives and Trump supporters as “violent extremists” and “domestic terrorists” and the construction in January of a seven-foot-tall metal fence topped with prison-style razor wire around the U.S. Capitol building, along with the deployment of thousands of armed soldiers in Washington, D.C., to protect Democratic politicians from an unseen and nonexistent enemy.

What unites every one of these – and many other – current assaults on the minds, livelihoods, families, happiness and liberties of Americans can be summarized in a single word: Fear.

The Biden administration – a tightly managed puppet show featuring a mumbling, shuffling, corrupt old political hack, behind whom schemes a cabal of far-left radicals dedicated to rapidly transforming America into a socialist state – rules through fear.

Utterly incompetent to deal with any actual major challenge to our nation, the current administration is attempting to subjugate the citizens of the freest nation on earth by resorting to the same methods totalitarians, dictators and tyrants have long used to dominate a population: Deliberately instilling into the people mortal fear and hatred toward nonexistent or exaggerated threats, and toward one another, at every opportunity.

Of course, fear isn’t an end in itself. What today’s ruling oligarchs crave is control, submission, subservience – their ticket to ultimate power, the fulfillment of their desire to be gods, since they have nothing but contempt for the real God and His laws.

Bestselling author and national radio talker Dennis Prager sums it up nicely when he says, “The dominant force in America is fear of the left.”

If fear is the primary tool wielded by today’s ascendant Democrats, it is also how they came to power in the first place.

During the 2020 presidential campaign, many pundits astutely observed that Biden’s real running mate was not the shallow, dishonest, cackling and uniquely repellant Kamala Harris, but COVID-19. The pandemic allowed Biden to hide in his Delaware home and avoid answering questions that would easily have exposed his excruciatingly evident physical and cognitive decline, while subjecting him to inquiries about his decades-long history of lying and serial plagiarism, as well as his epic personal and family corruption. The public might also have discovered why Biden manages to be almost preternaturally wrong about everything. As Robert Gates, secretary of Defense for both Presidents George W. Bush and Barack Obama, put it: “I think he has been wrong on nearly every major foreign policy and national security issue over the past four decades.”

Instead, the coronavirus pandemic allowed the Democrat-Media Complex to shield Biden from public scrutiny under cover of COVID – while simultaneously stoking fears of then-President Donald Trump, whom they continually compared to Hitler – and essentially to pick Biden up, hold him high overhead and carry him across the finish line without his ever really having to come face-to-face with the American people.

Since his January inauguration, Team Biden has done its very best to keep Americans in a constant state of fear and confusion with regard to COVID. In the name of “fighting COVID” or “COVID relief,” the Biden administration and the Democrat-controlled Congress are pushing astronomical spending bills, Democrat-socialist wish lists, big payoffs to Democratic constituent groups and a never-ending list of perverse, reckless, revolutionary, unconstitutional, corrupt and just plain stupid initiatives – all by invoking the fear-inducing magic word, “COVID!”

The “Great Reset,” which globalists and world leaders have openly boasted would amount to a complete socialist restructuring of the world system under cover of COVID-19, is playing out in America right now.

So, where’s the mass pushback?

Many – perhaps most – Americans today are afraid of honestly expressing what they really think. Last November’s presidential election was likely the most fraudulent of our lifetime – and yet, no one in the media is supposed to say that anymore. If a news or opinion host says “the election was rigged,” he or she is likely to be censored or banned. Pretty soon, most people in such an environment become self-censoring: If they know they’re going to be shut down, they never say it in the first place.

Likewise, Americans are raising a generation of children who live in fear. The left would love nothing more than for every child to be a little Greta Thunberg, neurotically obsessed with, and fearful of, imminent catastrophic climate change. Why? Because that mindset opens the floodgates to the complete “re-imagining” – one of the left’s favorite terms – not just of policing, race relations, immigration and energy policy, but of everything. 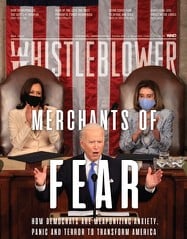 Editor’s note: The preceding is adapted from the May issue of WND’s acclaimed monthly Whistleblower magazine. If you would like to explore this subject more deeply, read “MERCHANTS OF FEAR: How Democrats are weaponizing anxiety, panic and terror to transform America.” The issue is also available in state-of-the-art digital form. Better yet, SUBSCRIBE TO WHISTLEBLOWER (print edition) and get 12 fantastic issues or else get an ANNUAL DIGITAL SUBSCRIPTION.