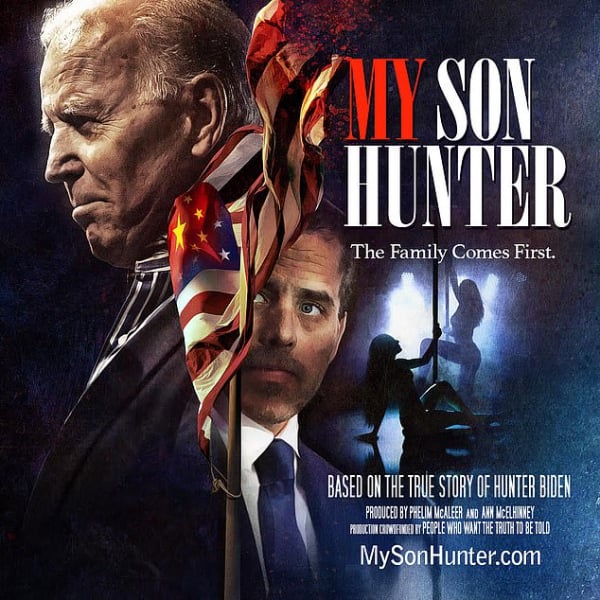 The Irish-born filmmaking couple Phelim McAleer and Ann McElhinny have employed the medium of film to spotlight big stories and trends that establishment media either ignore or slant.

Their screenplays typically rely on transcripts of sworn witness testimony, such as in the anti-abortion feature “Gosnell: The Trial Of America’s Biggest Serial Killer” and the recent “ObamaGate: The Movie,” on the Trump-Russia collusion probe.

Now, in “My Son Hunter,” they will take on the censored story of “Biden family corruption” as revealed in the abandoned laptop of Hunter Biden.

They plan to raise $2.5 million in a crowdfunding campaign within the next 60 days “to create the new film that will expose the truth behind Hunter Biden’s scandals and their direct connection to President Joe Biden.”

See the site for “Son of Hunter”

Much of the film, they said, will be set in Ukraine and will center on Hunter Bidens’ controversial business dealings.

During the election campaign last fall, the couple countered the spin on the Trump-Russia collusion story with “ObamaGate.”  Teaming with the Washington watchdog Judicial Watch, the “Hamilton”-style 70-minute film derives its script word-for-word from the wealth of texts, emails, memos and witness transcripts collected in the many Trump-Russia investigations. The movie can be viewed at no cost via YouTube.

“The media and big tech covered up the bombshell report by the New York Post that showed the depth of corruption in the Biden family,” McAleer said in a news release Monday.

“The truth deserves to be told, and it needs to be seen by as many people as possible,” he said.

McAleer said an “entertaining and enjoyable movie is the best way to tell the story of the Biden family’s corruption and to ensure as many people are educated about this as possible.”

McElhinney described the story as “Austin Powers meets King Lear, with a dash of ‘House of Cards.'”

“The story is so compelling that viewers on both sides of the aisle will find it incredibly entertaining,” she said.

The couple said actors have yet to be announced. But Laurence Fox, known for his roles in “Victoria” and “Becoming Jane,” told The Telegraph of London he has been approached and is considering playing the role of Hunter Biden.

See the couple’s announcement of the film:

Fox, who is from a well-known British acting family, last year founded the Reclaim Party in the United Kingdom to “reclaim” British values from politicians, who he says have “lost touch with the people.”

Prior to producing documentaries for the BBC and other networks, McAleer was a foreign correspondent for the Financial Times and for The Economist in Eastern Europe. Before that, he covered Ireland for the Sunday Times of London. He began his career covering the Northern Ireland for The Irish News in Belfast.

The couple’s book “Gosnell: The Untold Story of America’s Most Prolific Serial Killer” was an Amazon and New York Times bestseller. Other notable works are the films “FrackNation, Not Evil Just Wrong,” “Mine Your Own Business, “The Search for Tristan’s Mum” and “Return to Sender.”

What a shot! New vaccination law jabbed as threat to parental rights