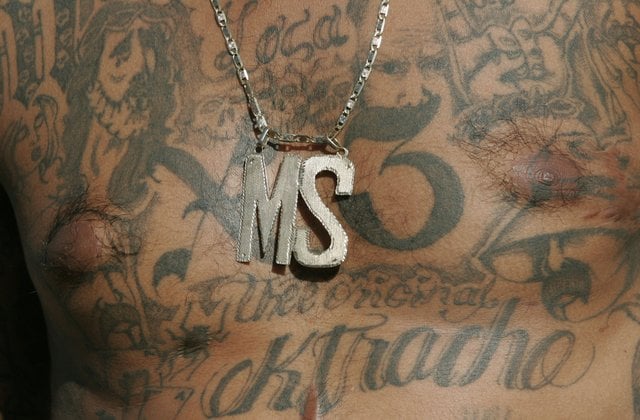 The Department of Justice has charged 14 of the highest ranking members of the MS-13 gang for committing terrorist acts.

An indictment was unsealed in Central Islip, New York, on Thursday accusing the defendants of directing MS-13’s violent criminal activity around the globe for 20 years.

“Specifically, the indictment charges the defendants with conspiracy to provide and conceal material support to terrorists, conspiracy to commit acts of terrorism transcending national boundaries, conspiracy to finance terrorism and narco-terrorism conspiracy in connection with the defendants’ leadership of the transnational criminal organization over the past two decades from El Salvador, the United States, Mexico and elsewhere,” the DOJ said.

Defendants include Borromeo Enrique Henriquez, aka “Diablito de Hollywood,” who is widely recognized as the most powerful member of the gang, which is also called Ranfla Nacional.

Henriquez and 10 other defendants are in custody in El Salvador, and the U.S. is working on extraditing them to the U.S.

Acting Attorney General Jeffrey A. Rosen said: “The indictment announced today is the highest-reaching and most sweeping indictment targeting MS-13 and its command and control structure in U.S. history. When Attorney General Barr announced the creation of JTFV in August 2019, he envisioned a whole-of-government approach that would combine proven prosecution tools from the past with innovative strategies designed specifically to eliminate MS-13 leadership’s ability to operate the gang and direct its terrorist activity. This indictment reflects an important step toward achieving that goal. By working side-by-side with our U.S. law enforcement partners and with our partners in El Salvador, we have charged MS-13’s highest-ranking leaders with operating a transnational criminal organization that utilizes terror to impose their will on neighborhoods, businesses and innocent civilians across the United States and Central America.”

Acting U.S. Attorney Seth D. DuCharme said MS-13 “is responsible for a wave of death and violence that has terrorized communities, leaving neighborhoods on Long Island and throughout the Eastern District of New York awash in bloodshed.”

“Even when incarcerated, the Ranfla Nacional continued to direct MS-13’s global operations, recruit new members, including children, into MS-13, and orchestrate murder and mayhem around the world,” he said. “Today’s ground-breaking indictment seeks to demolish MS-13 by targeting its command and control structure and holding MS-13’s Board of Directors accountable for their terroristic actions.”

The indictment accuses Ranfla Nacional of assembling, around 2002, a command structure for the gang to “effectuate their decisions.”

“They directed acts of violence and murder in El Salvador, the United States, and elsewhere, established military-style training camps for its members and obtained military weapons such as rifles, handguns, grenades, improvised explosive devices (IED) and rocket launchers. As leaders of MS-13, the defendants controlled swaths of territory and engaged in public relations efforts on behalf of the transnational criminal organization,” the DOJ charged.

One key component of the gang was its demand for loyalty. Those who rebelled against requirements, disrespected other members or cooperated with law enforcement were subject to the death penalty.

The gang ordered the murder of police in El Salvador as well as an FBI agent detailed there, the filing charges