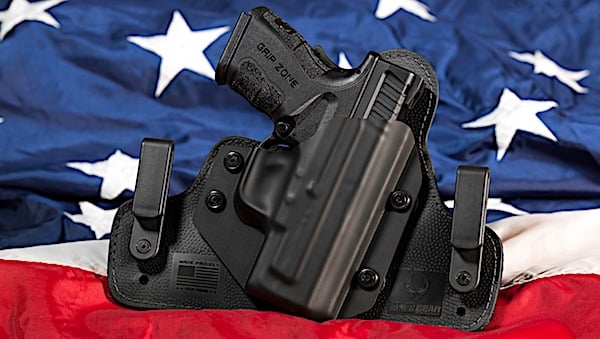 The U.S. Supreme Court will rule soon on whether police are allowed to enter a man’s home without a warrant and take his guns.

That will be after they hear the Biden administration argue that such a scenario is reasonable.

The court heard arguments Wednesday in a case involving a Rhode Island couple. The couple got in an argument that spiraled out of control when the husband, Edward Daniglia, gave his wife, Kim, an unloaded gun and told her to put him out of his misery.

She left the house but later called police to check on him.

The Washington Examiner reported the case “comes amid increasing friction between police and many of the communities they are tasked with protecting.”

In the Rhode Island case, when police arrived, they found Caniglia was calm, but hauled him to a hospital for a mental health evaluation anyway. They then searched his home and took his guns.

He alleged police violated his Fourth Amendment rights but lost at district and appellate courts.

The Examiner reported several justices focused on the legal provision police have for “community care.” Typically that gives them the ability to search vehicles for anything that could be a danger to a community. It hasn’t commonly been applied to homes.

Justice Brett Kavanaugh cited the need for officers to be able to check on seniors who might have fallen.

The Biden administration urged the justices to agree with police.

“The ultimate question in this case is therefore not whether the respondent officers’ actions fit within some narrow warrant exception, but instead whether those actions were reasonable.”

The Rutherford Institute said case could set a dangerous precedent because  police entered a citizen’s home without a warrant and took legal firearms.

It filed a friend-of-the-court brief contending the “community caretaking” exemption in the Fourth Amendment was wrongly used.

“This case represents a blatant attempt by law enforcement to create gaping holes in the Fourth Amendment force field that is supposed to protect homeowners and their homes against warrantless invasions by the government,” said constitutional attorney John W. Whitehead, president of the Rutherford Institute.

“What we do not need is yet another slippery slope argument that allows government officials to masquerade as community caretakers under the pretext of public health and safety in order to violate the Fourth Amendment at will.”

If the argument stands, the institute said in its brief to the Supreme Court, police would be allowed to “enter a home without a warrant and seize lawfully possessed firearms.”

The institute said: “The warrantless searches and seizures to which American colonists had been subjected under English rule were among the driving forces behind enactment of the Bill of Rights in general and the Fourth Amendment in particular. Both as drafted and as applied by the court, the Fourth Amendment clearly creates a reasonable expectation of privacy in the home. The sacrosanct nature of the home is such that the circumstances under which warrantless home searches are permitted are few and far between.

“That explains why one of the few exceptions to the warrant requirement that the court has previously recognized – the so-called ‘community caretaking exception – is expressly limited in scope to vehicles, where the reasonable expectation of privacy is much narrower.”