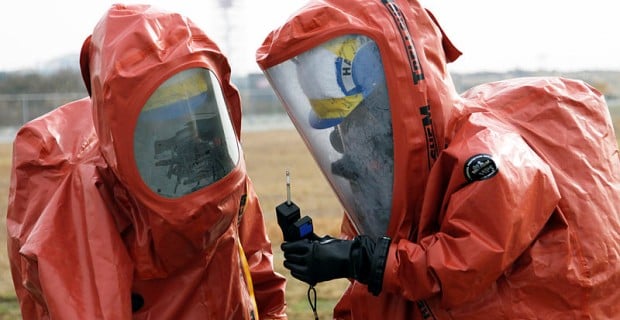 It is Judicial Watch that obtained dozens of pages of redacted records and communications from the Federal Select Agency Program that included the details.

One report summary, from the USDA and HHS in 2021, said during the 2020 calendar year, the program got “13 reports of losses, 158 reports of releases, and no reports of theft of [biological select agents and toxins].”

The statement continued, “None of the reported releases resulted in death or transmission among workers nor transmission to the outside of a laboratory into the surrounding environment or community. FSAP [the Federal Select Agent Program] received one report from a non-registered entity of a release that resulted in an occupational illness in one worker that made a full recove1y after receiving medical treatment. The FBI investigated all 13 reports of losses and, in all cases, determined there was no criminal nexus.”

“These documents uncover a pattern of serious safety issues in biolabs here on U.S. soil,” stated Judicial Watch President Tom Fitton. “And, given these issues here at home, one can imagine the safety issues of labs the U.S. funds abroad.”

That issue has been a key component of two major world catastrophes in recent years: the U.S. funding for the Wuhan, China, lab where COVID-19 is believed to have come, and the purported U.S. funding of biolabs in Ukraine that are targeted by Russia’s war.

Revealed were situations like that of a letter to an anonymous recipient in 2021 that advises its authority “to possess, use, and transfer select agents and toxins” has been suspended.

The letter said, “[T]he APHIS/CDC [Animal and Plant Health Inspection] … reports and notification of inventory discrepancies made in January 2019, October – November 2020, and most recently in January 2021, indicate systemic noncompliance with inventory record keeping and effective training requirements that would prevent these repeated occurrences. Despite written assurances by the Responsible Official (RO) after each aforementioned incident that staff had been retrained on inventory practices and reminded of [the importance] of proper communication [redacted] continued to report inventory discrepancies.”

And a letter in 2020 was titled “Corrective Action Plan” and explains to the recipient that failing to follow an earlier plan of action could end up in the “suspension or revocation of [redacted] certificate of registration for the possession, use and transfer of select agents and toxins.”

Other documentation revealed the suspension of authority for other organizations to handle “select agents and toxins.”

Multiple situations were referred to the FBI, the information reveals.

And the documentation reveals that 138 times there were “manipulations” of select agents or toxins “outside a biological safety cabinet or other equipment designed to protect from exposure.”

One worker got sick after being exposed to Coxiella Burnetii, but recovered, the released information confirms.

The watchdog reported: “In June 2021, Judicial Watch, through a FOIA lawsuit, uncovered a January 19, 2018, State Department cable from the US Embassy in Beijing about the Wuhan Institute of Virology with the subject ‘China Opens First Bio Safety Level 4 Laboratory’ that includes a section titled ‘Unclear Guidelines on Virus Access and a Lack of Trained Talent Impede Research,’ which notes in its introduction that ‘its current productivity is limited by a shortage of highly trained technicians and investigators required to safely operate a BSL-4 laboratory and a lack of clarity in related Chinese government policies and guidelines.'”