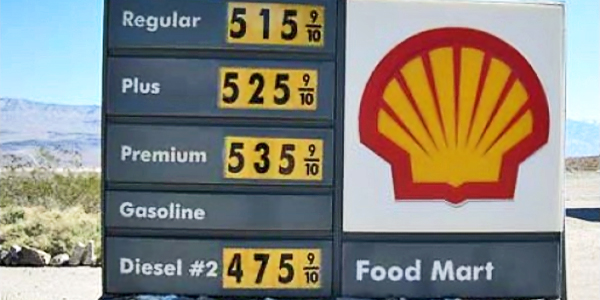 Americans in the lower to middle income brackets are in pain these days because of energy costs – the surging per gallon price of gasoline hits a store clerk much harder than a megamillionaire Washington politician or a movie star.

But leftists believe it’s not hitting hard enough yet.

How do we know?

In fact, as the gasoline prices in America reach levels never before seen, there’s been discussion of a holiday from the federal gas tax – to cut the costs for consumers.

That, in fact, “undercuts the administration’s climate change goals – where really to care about fossil-fuel consumption, we don’t want lower prices for fossil-fuel buyers, we prefer higher prices,” he said.

Attacking energy supplies for American consumers isn’t new with the Joe Biden administration. Obama did it while president, back when Biden was vice president. Under their second term, some 43,000 megawatts of energy production from coal was abandoned in America.

That trend continued into the administration of President Trump, as one doesn’t start, or stop, a coal-fired power plant on a moment’s notice.

The Federalist reported on a new trend with stickers picturing Biden, and the statement “I did that,” being posted on gasoline pumps at service stations.

“It’s obvious to everyone paying attention (except for Biden and his corporate media comms shop… but that’s redundant) that the Democrat administration’s policies, not just the Russians, are to blame for rising prices at the pump. The third week of February, before the Russian invasion of Ukraine started, the average price of U.S. gas was $3.53 per gallon, compared with $2.38 the week Biden took office: a $1.15 difference. (That fact hasn’t stopped Press Secretary Jen Psaki from lying through her teeth to blame the spike entirely on Russia.),” the report said.

But price hikes aren’t through “incompetence,” the report explained. “Your pain at the pump isn’t just unforeseen collateral damage of the White House’s policies — it’s a very intentional result of it.

“That’s right: Biden wants staggering gas prices to force you from being able to drive where you want, when you want, as much as you want to. It’s all a part of his green energy agenda, which panders to radicals on the far-left side of Biden’s ever-further-left party.”

The report pointed out Biden has been actively pursuing that goal.

“From canceling the Keystone XL pipeline to suspending new drillings on federal lands to moving us away from the energy independence the U.S. established under former president Trump. That agenda has been apparent even in the Biden administration’s tone-deaf responses to the current spike in gas prices.”

It was at the Climate Depot that Mazur’s comments were highlighted.

Climate Depot’s Marc Morano, author of “Green Fraud: Why The Green New Deal is Even Worse Than You Think,” said, “Skyrocketing energy prices are exactly what the climate and environmental agenda demands and has demanded for the past 50 plus years. From President Obama to President Biden, higher energy costs have been the plan to soften up Americans and the economy to prepare them for accepting less in order to impose the progressive vision on society. High energy prices and shortages will condition Americans to accept a ‘new normal’ in energy that is entirely due to following the climate agenda.

He suggested opening up American production.

“It’s time to stop the sanctions — against American domestic energy!” he said.

The Washington Post said gasoline prices in the U.S. have risen 14% in just the last week.

Jack Gillis, executive director of the Consumer Federation of America, an association of consumer advocacy organizations, said, “So it is pretty shocking to consumers.”

Biden claimed that the solution is going further green.

“Transforming our economy to run on electric vehicles, powered by clean energy, will mean that no one will have to worry about gas prices,” he said on social media. “It will mean tyrants like Putin won’t be able to use fossil fuels as a weapon.”

But with electric vehicles prices like luxury sports cars, at $60,000, $70,000 or event more, and power grids so far completely unprepared to deliver the charges for those vehicles, fossil fuels still will be needed for the foreseeable future.