There has been much said and written about the White House’s new world-record-breaking $6 trillion dollar budget. But what I have to say will absolutely convince you the fiscal insanity coming from the Oval Office will cripple our economy and your future and family, too. Whether you’re Republican, Democrat or Independent, this is important information you and your loved ones must know about the future.

In 2007, I began writing the first edition of my New York Times bestseller, “Black Belt Patriotism: How to Reawaken America.” Even after seven years of Middle East wars under former president G.W. Bush, unemployment was less than 5%; the annual federal budget was about 2.9 trillion; the federal deficit was $161 billion; and the national debt was $9 trillion.

Today, under Mr. Biden’s proposal, the federal budget would stand at a staggering $6 trillion (the largest in U.S. history). The national deficit is a colossal $1.931 trillion, and the national debt is three times the amount of 2007 at a gargantuan $28 trillion dollars. And unemployment is stuck at 6.1%, with states like Nevada, California, Connecticut, New Mexico, New York all over 8% and Hawaii at 8.5%.

What’s wrong with this picture? Anyone with a sixth-grade math education can figure it out.

The national debt is not merely the result of excessive spending; it is also the result of revenues not being high enough to pay for government outlays (expenditures). In other words, while the feds have spent trillions and trillions and trillions of dollars on the national credit (debt) card bailing out everyone from automotive businesses to fake seaweed companies and zebra-loving environmental companies, they do nothing to increase the federal revenue to pay for it all. (This is very reminiscent of 2009, when then Vice President Biden again called for more government spending to lift us from the recession. Does he not have any other wealth-producing options?)

Consider the chart below reflecting data from the U.S. Office and Management and Budget and posted recently in the Wall Street Journal. It explains the larger fiscal story on spending and taxes as a share of the GDP. The only comparable period to Biden’s recent spending and debt accumulation was World War II. Yet, once the war ended, military spending fell, and economic growth slowly reduced government debt as a share of GDP. 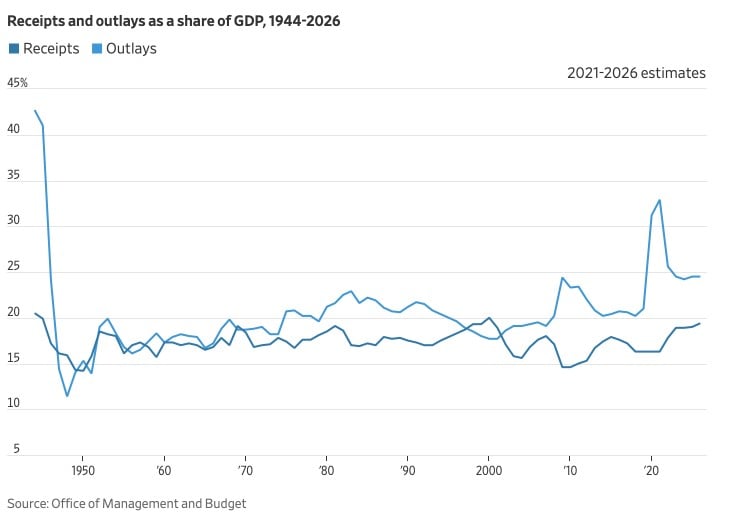 When the receipts don’t cover the outlays, it should be a sign the U.S. government is in trouble, but that’s just another typical day of federal government operation. When government wastes over $100 million a year alone on minting pennies for 1.76 cents each and nickels for 7.5 cents each, the federal government should be the first to recognize that it runs the worst business in the world; but it is the last to admit it. And that’s been going on for decades! How much more can our federal wallet, economy and U.S. dollar take before they snap?

And to add insult to injury, our vassalage or slavery to other countries deepens as they bankroll increasing amounts of U.S. debt, with more than one-half of it being held by private investors in foreign lands.

In 2012, the International Business Times reported, “China overtook Japan as the largest holder of U.S. national debt in 2009. As of December (the most recent data available), it held about 23.1 percent, or $1.15 trillion, of all foreign investment in U.S. privately held federal debt, according to a newly released report by the Congressional Budget Office, or CBO. … Without monetary policy change, the CBO warned in its Long-Term Budget Outlook, the U.S. federal debt could be twice the size of the U.S. gross domestic product by 2037.” We’re well on our way!

In 2021, while Japan has taken a slight edge again in ownership of U.S. debt, Investopedia explained why China remains the greatest threat to our economy: “China gets a lot of attention for holding a big chunk of the U.S. government’s debt and for good reason, given its rapidly expanding economy … with $1.07 trillion in Treasury holdings in April 2020, just behind Japan.”

The size, scope, growth and communist political regime of China make it the No. 1 threat to U.S. economic and national power, stability and security, according to Market Watch. And yet, they continue to purchase our national debt like its candy, and we in turn further bolster the Chinese economy by continuing to purchase myriad products made in China. What am I missing?

And what’s Biden’s plan to pull us out of this fiscal bondage and foreign servitude? Spend more and let China purchase more of the U.S. via its debt? It is a surreal economic nightmare that foreign investors own more of the U.S. national debt than the U.S. government itself! 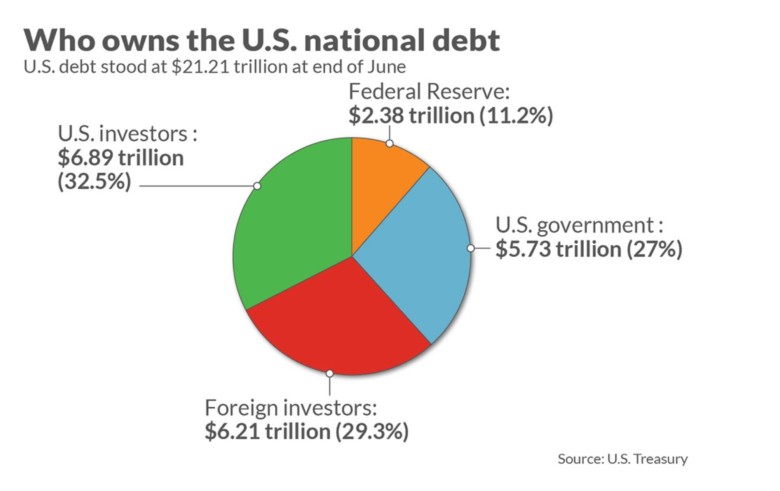 Why doesn’t the White House and Congress recognize how vulnerable and susceptible foreign ownership – especially by enemies of the state – leaves the U.S.? China is being emboldened on the world stage by U.S. passiveness. Iran is again arming its proxies across the Middle East and in Israel. Migrants are flooding the U.S. Southern border at alarming rates.

Yet, Mr. Biden believes the military and border security need to go on a hiatus. In his $6 trillion dollar budget, Mr. Biden will actually weaken our national security by allocating declining budgets for Defense (1.6%) and Homeland Security (0.2%).

As if the news couldn’t be worse, Mr. Biden is also increasing the tax burdens on mom-and-pop businesses and corporations across America by $3 trillion dollars. It will be the largest tax hike as a share of the economy since 1968, and the middle class will end up footing the bill, according to Strategas Research Partners. And rather than draw back companies to the U.S. that have been enticed to go abroad, Biden will assure they have no road to come back.

Writing in the Washington Post, Marc A. Thiessen summarized Biden’s tax plan for most Americans: “The nonpartisan Tax Policy Center estimates that 65 percent of Americans saw their taxes go down under Trump’s tax reform – which means that under Biden’s budget 65 percent of Americans will see their taxes go up. Even the Institute on Taxation and Economic Policy – a left-wing group which opposed the Trump tax cuts – acknowledged that every income group in every state would pay less on average thanks to those cuts – which means that every income group in every state will pay more if Biden lets their tax cuts expire.”

And where does that lead the rest of us? The value of our shrinking paychecks and U.S. dollar? And our bank and investment accounts? Do you see the jeopardy of your future finances?

According to Morning Star research and investment analysis, “our increased forecast for 2021 GDP growth will translate into higher inflation in 2021 than we originally expected. We now expect inflation (as measured by growth in the Personal Consumption Expenditures Price Index) of 2.3% in 2021 versus 1.8% previously.”

Here’s how the bad news of inflation is graphed over the next five years. Compare it to the previous five years under the Trump presidency: 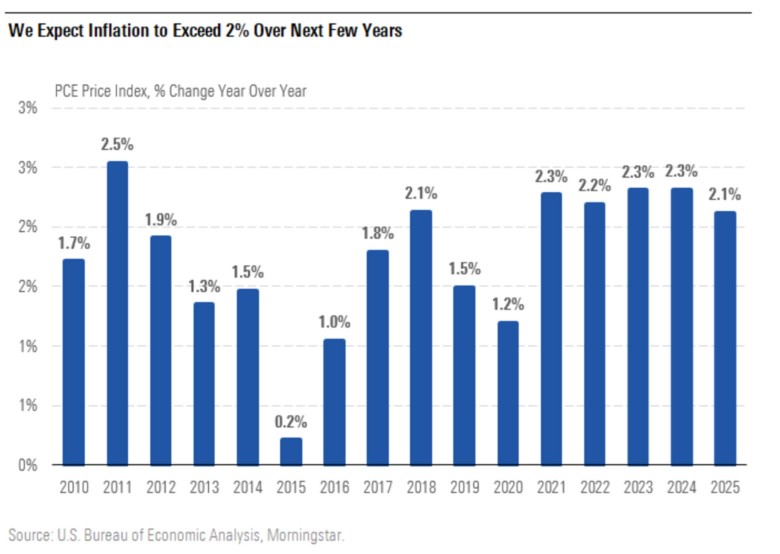 Is the White House even listening to anyone anymore or just running amok its own way? Are they intentionally leading us as lambs to the financial slaughter? Bottom line, Biden’s $6 trillion budget is bad news for your wallet and financial portfolio.

The fiscal actions being taken by the Oval Office remind me of an ancient Proverb mentioned twice in the Bible just in case we didn’t get it the first time: “There is a way that seems right to a man, but in the end it leads to death.”

It’s high time for all Americans to quit waiting for federal or state governments to provide for your welfare, protection, relief and especially for permission to reboot your life, liberty and pursuit of happiness. It’s time for Americans to quit hoping the feds will stabilize your money. It’s not going to happen.

We need to protect what God has been good enough to give and to entrust to us: our faith, family, freedom and finances. I believe one of the best options for doing that is learning more and investing more in precious metals like gold and silver, as my wife, Gena, and I have been doing for 40 years. Through thick and thin, they’ve provided the financial backbone to our lives and livelihoods, and even brought us and our nonprofit mission, KickStart Kids, through some very tough times.

After researching a number of companies, we felt Goldco set the standard for integrity, the best advice and for helping Americans protect and grow their money. That’s why I am proud to be an official spokesman for Goldco. In fact, Goldco is the only company I recommend for gold and silver.

Goldco’s specialists can help you roll over or transfer assets from a 401(k), IRA, TSP, or pension account into a gold IRA. They work with mints around the world to source gold coins and bars and ensure that the gold you’re buying is guaranteed to be 100% authentic. And they can even help you take a distribution in cash or gold.

The time for action and change is now! It’s time for you to look beyond the dollar for your ongoing financial security and safety. Investing in precious metals is your way through and out of the next five years of inflation.

It’s your life, future and finances. Take action now before it’s too late. Contact a Goldco representative ASAP. At very least, go to their website and ask for the next edition of my FREE Goldco Church Norris Special Report and Bonus Newsletter. And tell them Chuck sent you!

(In Part 2 of this critique of the White House’s new $6 trillion dollar budget, I will discuss how the first eight U.S. presidents handled national debt and what I know they would say to Mr. Biden, whether he wants to hear it or not).