Let me tell you a little story.

One evening a few years ago, my husband and I attended a potluck dinner with friends. A neighbor and I began discussing the second-hand vehicle we had recently purchased from a charitable organization called Union Gospel Mission Motors. I told the neighbor how convenient it was that we could view their inventory online to determine what vehicle suited both our budget and our needs.

Ten minutes later, when conversation had tacked to a different subject, this neighbor took out her smartphone to check something … and found an advertisement for Union Gospel Mission Motors on her screen.

Now how do you suppose this happened? Dinner took place at a third-party home, neither ours nor our neighbor’s. The only explanation is the neighbor’s smartphone was monitoring our verbal conversation.

Got that? Her smart phone was monitoring our verbal conversation. Folks, that is creepy beyond belief. Add to that the millions of harmless little Alexas out there monitoring countless conversations.

Ever since the Internet of Things arose, I’ve been wary of anything “smart.” I cannot for the life of me fathom why anyone would voluntarily purchase something that monitors everything they do and reports it back to some central location. As the saying goes, “There is no Cloud. There’s just someone else’s computer.” It’s one of the many reasons we’ve never owned smartphones and never will.

Fast forward to today. As some readers may remember, we just moved to a new place. It’s the first time in our 30 years of marriage that we’ve lived in a “modern” house with up-to-date appliances. We now have a washing machine that sings to us and has settings for everything including Mesopotamian linens. We have a dishwasher that chimes. We have a clothes dryer that jingles. We have a refrigerator that dispenses ice cubes. We have central heating. And we plan to get rid of all of them. 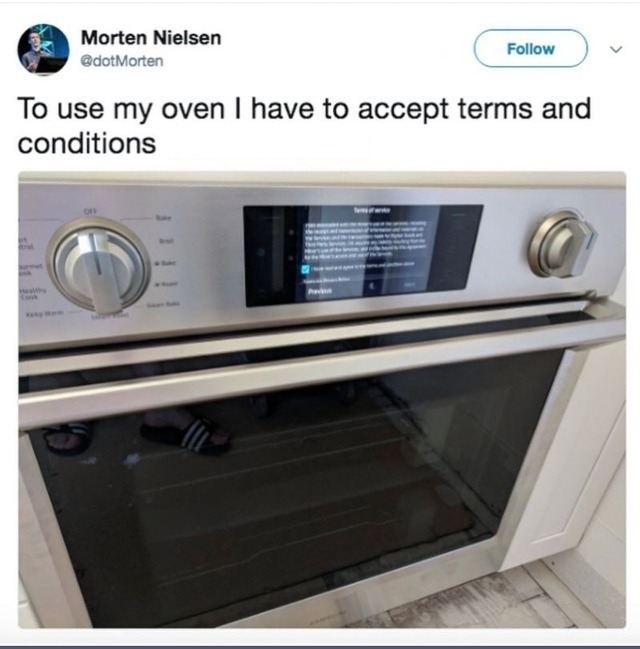 It may take a while, but that’s our plan – to replace any appliances that sing, jingle, or chime. We plan to downgrade from the fancy stuff to the plain, and to simply dismantle and sell appliances we don’t need or want. We’ll jettison the clothes dryer and dishwasher altogether. The central heating system will be supplanted by the exact same model of wood cookstove we used for years in our old house. (To understand our interest in wood cookstoves, see this article.)

Why are we so techno-phobic? Besides our preference for doing things ourselves, consider a few – just a few – of the dozens of links I’ve collected in the last year or so:

And on and on it goes, far too many stories to post in this column, culminating in a piece from mid-December entitled “When ‘smart’ homes turn stupid: Google users literally left in the dark during outage” in which a Google outage made it impossible for people in smart homes to turn on their lights or even enter their own homes. Doesn’t this creep you out? If not, it should.

As we develop our new property into a self-sufficient homestead on par with what we had in our last place, we’ll also be milking our own cows, making dairy products, scything and threshing our own wheat, canning our own fruits and vegetables, and otherwise living as low-tech a lifestyle as possible without actually going off-grid (itself a ridiculously expensive endeavor that is not cost-effective). And if/when the power goes out, we have low-tech backups for all our modern conveniences. Wait a few years and we might resemble an Amish farm.

You might say our New Year’s resolution is go low tech – as low tech as is possible while still maintaining the ability to make a living in a modern world.

Writer Joshua A.T. Fairfield equates the Internet of Things with modern-day feudalism, in which we (the peasants) don’t own anything, but instead must lease it from our overlords: “In this 21st-century version, companies are using intellectual property law – intended to protect ideas – to control physical objects consumers think they own.”

In 2017, a Danish politician named Ida Margrete Meier Auken, who has connections to the World Economic Forum (think “The Great Reset“), published an article entitled: “Welcome to 2030. I own nothing, have no privacy, and life has never been better.” She outlines her own version of Utopia requiring a degree of control that, quite frankly, sounds like a living hell to me.

That’s why I’m suspicious of smart technology. I don’t want some Google overlord telling me what I can and cannot do, locking me out of my home, preventing me from turning on lights and tracking not just my location, but my heartbeat, tone of voice and digestive output. Since I’m online, I’m tracked enough anyway; I don’t need to spoon-feed Big Tech any more data than it already has.

Look, folks, 2021 is likely to be dystopian enough. Why would anyone make their lives even more so by buying one of these horrible “smart” devices? Do you really want every conversation spied on and every location documented? Do you really want to live in a home that ceases to function if Google is having a bad hair day?

Maybe it’s time to “dumb” our technology down a bit and learn to do things by hand, once again.