Citizens across Europe protested COVID-19 vaccine mandates and restrictions over the weekend, including in Austria, which will become the first country to require the jab for every citizen.

Chanting “resistance!” and blowing whistles, an estimated 40,000 people in Vienna protested a new lockdown, which began Monday, Bloomberg News reported. Beginning in February, Austrians who refuse to be vaccinated will face fines of up to $4,000.

Some protesters wore doctor’s scrubs while others donned tinfoil hats. Among the messages on signs were “My Body, My Choice” and “We’re Standing Up for Our Kids!'”

🇦🇹 After the enormous protest yesterday in Vienna, there are thousands and thousands of people on the streets again today in Austria. This is Linz. pic.twitter.com/JnSmI16yMk

#Amsterdam #COVID19 #Europe#Russia #Netherlands Flag of Netherlands Scenes of chaos tonight in #Rotterdam A protest against the government’s health/vaccine pass project and sanatary restrictions escalates in the city center. pic.twitter.com/7gA2G78PhC

The Netherlands, with about 90% of the population vaccinated, has required vaccine passports for two months. But cases have spiked 942% and the government is reimposing lockdowns. 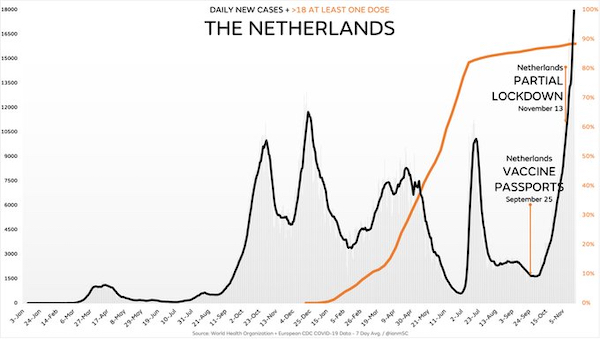 In Italy, 3,000 gathered in Rome’s at the famous Circus Maximus field to protest the imposition of a “Green Pass” vaccine passport, which is  required to enter workplaces, restaurants, cinemas, theaters, sports venues and gyms. The pass also is required for long-distance train, bus or ferry travel within Italy.

Protests continue in Paris on Saturday where citizens have been protesting digital vaccine passes for four months.

Protests continue in Paris, France, where citizens have demonstrated for over 4 months in solidarity against digital vaccine passes and the new wave of COVID lockdowns and tyranny spreading across Europe.pic.twitter.com/0noVv9Lkqp

In Switzerland, 2,000 people protest ahead of a referendum on the government’s COVID-19 restrictions law, contending it is discriminatory, public broadcaster SRF reported.

In the Czech Republic, thousands gathered in Prague against vaccine mandates and passports.

Everywhere in Europe People Are Pushing Back Cause They Feel Their Freedom & HR are in Serious Jeopardy;
They Couldn’t Be More Right About It pic.twitter.com/jWNcToD1ri

In the Croatian capital Zagreb, thousands of protesters on Saturday carried Croatian flags and religious symbols along with banners against vaccination.

Tens of thousands of protesters have taken to the streets in Zagreb, Croatia today to march in solidarity against vaccine passes and COVID tyranny across Europe. pic.twitter.com/dZQnhXysM1

In Germany on Monday, Health Minister Jens Spahn warned that most Germans will be “vaccinated, cured or dead” from COVID-19 in a few months, Agence France-Presse reported

“Probably by the end of this winter, as is sometimes cynically said, pretty much everyone in Germany will be vaccinated, cured or dead,” Spahn said.

Germany has suffered a spike in coronavirus infections in recent weeks. An estimated 68% of the German population is fully vaccinated.

About 65% of Austrians have been fully inoculated against Covid-19. In the neighboring Czech Republic, the figure is 59%. Only 24% are inoculated in Bulgaria.