James Woods reveals 'only positive thing to emerge from pandemic'

James Woods is going public with what he believes is something truly positive to come out of the misery of more than two years of the coronavirus pandemic.

“The only positive thing to emerge from this pandemic was a well-earned contempt for the press and its unabashed political bias and criminal degree of irresponsibility,” the politically active actor posted Monday in a since-deleted tweet. 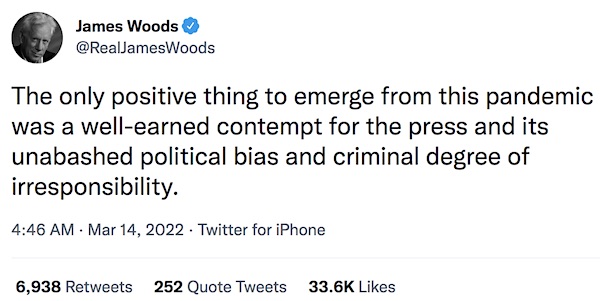 Many in the news media in the U.S. and worldwide have been harshly criticized for parroting government officials without question, while viciously demeaning and censoring highly respected doctors and experts who dared to challenge the official COVID narrative, labeling them as “fringe”and “kooks.”

Before it was removed, the actor’s remark prompted plenty of comments among his his 2.4 million Twitter followers, including:

One person responded to Woods’ statement with a photo of a U.N. soldier whose helmet is adjacent to a U.N slogan and logo, so it appears to read “UNinvolved in peace.”

Later on Monday, Woods noted: “Literally every first response to every tweet I post is flagged for offensive comment regardless of content. This is Twitter’s way of suffocating any speech on their app remotely inconsistent with their severely narrow bias.”

Is the coronavirus pandemic broadcasting a message from God? The answer is yes, and it’s revealed in an inspiring new book unlocking hundreds of Bible mysteries!