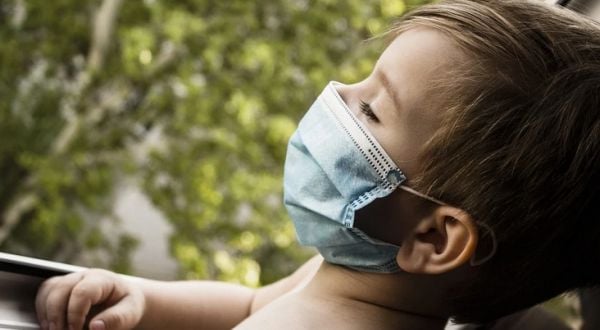 A mother is reporting she was kicked off an American Airlines flight because her 2-year-old with asthma was unable to wear a mask during an attack, which happened on the flight.

This is the same airline that earlier, according to a photograph, allowed Joe Biden’s climate czar, the globe-trotting John Kerry, to be on a flight without a mask.

A mother has alleged that an American Airlines flight attendant kicked her and her son off of a flight because the two-year-old could not wear a mask properly during an asthma attack.

A friend confirmed the scenario, advocating for the dismissal of the flight attendant involved, identified only as Carl.

Hello, maybe we get flight attendant fired from @AmericanAir today?

My sweet friend’s 2 year old son was having an asthma attack and wouldn’t keep mask on (because he couldn’t breathe) – and they turned plane around and had police waiting to escort them off. A 2 year old. pic.twitter.com/Ks2VbnNASW

A report at the Gateway Pundit provided a few details of the scenario that is becoming more and more common as mask mandates are thriving in a COVID-obsessed society.

The Gateway Pundit said the situation developed Monday on American Airlines flight 1284, which was turned around so that the airline to kick off the 2-year-old and his mother and grandmother.

“Amanda Pendarvis, the mother, posted on her Instagram story a video of her son who was having an asthma attack and was refusing to put on his mask due to his inability to breathe properly,” the report said.

“I do not have the energy to type all the details right now… but I will in the next couple of days. We are finally in peaceful Colorado with my in-laws and I am very grateful for that. But my mom, Way & me just had the most humiliating/traumatizing experience because of a truly evil, power-tripping flight attendant named Carl @americanair,” she explained.

“I’ll spoil the ending: He had the plane turned around and has us escorted off to be met by police officers: WHY? Wait for it….. because my 2 year old was not properly wearing a mask…. Mind you, Way is asthmatic. We showed him a negative COVID test Way had yesterday. Told him he has asthma & has never worn a mask before. He did not care that this asthmatic child was literally hyperventilating,” she said.

She confirmed she was wearing a mask, and was escorted off while “holding a mask” over her son’s face.

“I genuinely don’t have words,” she said.

American Airline confirmed to National File that the incident was true and the action of the flight attendant was based on the company’s policy.

In just recent days, Alaska Airlines banned a state senator who declined to mask up, forcing her into a 21-hour drive for her commute from her district to her work, Spirit Airlines banished a mother with her 4-year-old who is autistic and had a doctor’s note that he cannot mask up, hundreds of individuals were added to Delta’s no-fly list over their mask concerns, and Southwest Airlines booted a family because a 3-year-old passenger “might not” wear a mask.

Further, a family was told to leave a flight because a 2-year-old girl wasn’t masked – while she was eating. And a Jewish family was ordered off because of a maskless baby.