My wife's hometown surrounded by fire and heroes

By now, most people know that a large part of the western United States is blazing with forest fires. There are actually 100 large fires burning in 14 states, with dozens more blazing in western Canada.

Phys.org reported that, “The roughly 21,000 federal firefighters working on the ground is more than double the number of firefighters sent to contain forest fires at this time a year ago, and the agency is facing ‘critical resources limitations,’ said Anthony Scardina, a deputy forester for the agency’s Pacific Southwest region.”

An estimated 6,170 firefighters alone are battling the Dixie Fire in Northern California, right now the largest fire in the U.S.

The L.A. Times reported last week, “After igniting a month ago, the Dixie Fire has now seared 510,227 acres. It is the second-largest wildfire in California history and the 14th most destructive, burning more than 550 homes. It has scorched parts of Plumas, Lassen, Butte and Tehama counties, north of Sacramento, and was [only] 30% contained as of Thursday.”

Tragically, Plumas County’s small towns of Greenville and Canyon Dam were largely leveled to the ground by the Dixie Fire, but my wife’s little mountain hometown of Chester seemed to have been miraculously spared. A mandatory evacuation order from Sheriff Todd Johns was issued two days before the fire hit for all the vicinities surrounding Lake Almanor, including Chester.

With up to 25 mph winds pushing at its back, the Dixie Fire raced like a speeding locomotive to Chester. Firefighting planes even sprayed fire retardant on houses on the south side of town. The remaining of its roughly 2,100 people fled under sirens screeching through neighborhoods and law enforcement on loud speakers, yelling “Get out of town now!” On the map, Chester now looks like an island among a charred forest (see image below.) 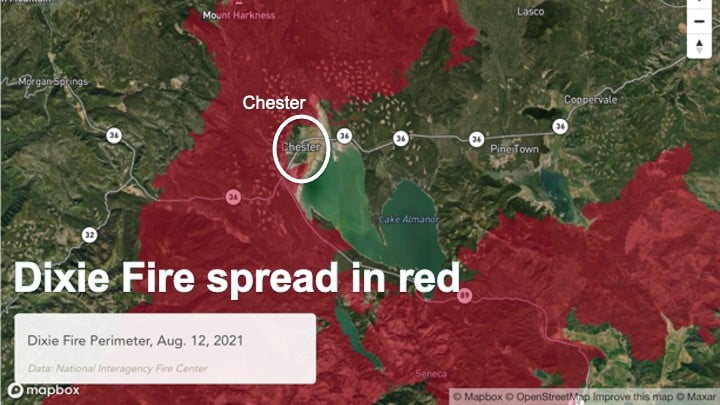 There are many unsung heroes that helped save Chester. Firefighters are at the forefront of course, but so are law enforcement, who keep the peace as well as back up other first responders and serve as emergency personnel for needy residents.

Ian James, Blake Mathews and a variety of California Highway Patrol officers are just a few of the brave law enforcement who stayed to help Chester survive. They were there when the Dixie Fire raged up to the edges of Chester and then helped remaining residents flee town to escape the inferno. And ever since, they and their comrades have been patrolling Chester (and its neighboring towns) while the fire literally encircled the roughly 7.3 square-miles of its mountain community, and then blazed north, east and west of it. Needless to say, for the last few weeks, the smoke levels in the area have been beyond toxic.

Unsung heroes also included other first responders, active and retired foresters and other Good Samaritans. My wife Gena’s brother, Eric O’Kelley, and his fellow foresters from the Collins Pine Company, loggers and foresters from Sierra Pacific and other private companies have been fighting to save Chester since the Dixie Fire first started. In addition to many protective measures, they dug fire trenches and cleared trees that would have otherwise fueled the fire.

As long as we’re discussing unsung heroes, we can’t leave out local mountain churches, whose pastors and parishioners have been down on their knees waging spiritual war through prayer on behalf of everyone fighting to save the Northern California mountain area and its population. Thankfully, there have been no reported casualties from the Dixie Fire, though four people remain missing from the town of Greenville. I just received word that the churches, along with Franklin Graham’s relief agency, Samaritan’s Purse, will also be aiding the fire victims and recovery when the mandated evacuation orders are lifted.

Though we now live in Texas, my wife, Gena, and her family have been residents in Chester for almost 80 years. She is third generation, our kids Kelley and Tim are fourth generation, and our grandkids are fifth generation. Before marrying me, Gena served in the Sheriff’s Department as a Correctional Corporal and Level 2 Reserve Deputy Sheriff. In addition to her brilliant mind and beauty, now do you see why Walker, Texas Ranger had to have her?!

The truth is, Gena’s hometown of Chester was spared and saved by heroes below and above, just as is true of every great town and city where people drop their differences and come together to fight oncoming disasters. They all are one more proof of what Christopher Reeve, a superman himself who fought against all odds in his own life, once said: “A hero is an ordinary individual who finds the strength to persevere and endure in spite of overwhelming obstacles.”