With the National Football League just having released its new policies and regulations regarding COVID-19 for the upcoming 2021 season, it is already playing hardball against its players.

If this wasn’t enough, the NFL has ratcheted up its policy even more, hurting both teams’ athletes even if just one is responsible for an “outbreak,” withholding paychecks from players on each side in a canceled game.

“The NFL is taking it too far when it comes to everyone on each team losing their game checks. I understand the NFL needs to lay out parameters for making sure games get played on schedule, but to punish everyone on both teams seems like it’s being taken way too far,” sports journalist and NFL expert Eric Chiofalo, radio host for 105.3 FM The Fan in Dallas and regular guest on NBC 5 Dallas, told WND.

“If the NFL is that worried about unvaccinated players, step up, just make it a requirement across the board. They’re basically forcing them to do it,” said Chiofalo. “Don’t go punishing everyone’s pockets because you as a league didn’t have the guts to make it mandatory for all your employees.”

After the league’s announcement, Arizona Cardinals wide receiver DeAndre Hopkins responded negatively towards the NFL on Twitter, hinting that his time in the NFL could now be short in light of the news. Hopkins later deleted the tweet.

“Never thought I would say this, But being put in a position to hurt my team because I don’t want to partake in the vaccine is making me question my future in the @Nfl,” tweeted Hopkins.

DeAndre Hopkins deleted a tweet “questioning [his] future” in the NFL after the league announced any team with a COVID outbreak due to unvaccinated players could result in a forfeit pic.twitter.com/PsOeCWQy4u

The NFL star followed up with another tweet, simply asking: “Freedom?”

Responding to a tweet that said, “Def a bad teammate if you don’t get the vax now…”, Los Angeles Rams cornerback Jalen Ramsey tweeted out, “I know 2 people right now who got the vaccine but are covid positive.. I’m just saying. I wouldn’t look at a teammate as bad if he don’t get the vax, no pressure from 5.”

I know 2 people right now who got the vaccine but are covid positive.. 🤷🏾‍♂️ I’m just saying. I wouldn’t look at a teammate as bad if he don’t get the vax, no pressure from 5️⃣ https://t.co/OGTbKJ1A6Z

This spark further conversation involving Hopkins, with the Cardinals wide receiver responding to Ramsey by saying, “… @jalenramsey My girlfriend brother in the military got the vaccine and had heart problems right after. When you stand for something they hate you!” 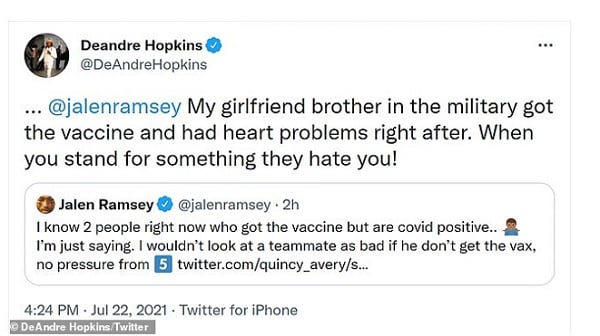 With Ramsey’s next tweet, it was obvious he was getting extraordinary backlash on his view on the vaccine. However, Ramsey stayed true to his words by doubling down, and all of his vaccine-related tweets are still existent on his Twitter account.

Some of y’all clearly didn’t get what I’m saying here lol.. the NFL is pressuring/ “influencing” guys to get the vaccine. They are saying if there is an outbreak, the team will be penalized heavily. My point is no teammate of mine will feel that pressure from me because… https://t.co/odRnl7xUUZ

Ramsey noted that you can still get COVID-19 even if after receiving the vaccine, and that he’s not going to be mad at any of his teammates if they decide to pass on the jab.

Just because my teammate(s) personally decide not to get the vaccine, I won’t think they are a bad teammate. That’s all 😂
It’s all love 🤟🏾

After the tweets from DeAndre Hopkins and the exchange between himself and Jalen Ramsey, rumors spread online about Hopkins possibly retiring from the NFL, however, Hopkins shut that down quickly, saying he’s still “got about 9 more years in me.”

DeAndre Hopkins and Jalen Ramsey aren’t the only players in the National Football League either resisting the vaccine or questioning the NFL’s new rules, or both, however.

Super Bowl champion Tampa Bay Buccaneers running back Leonard Fournette, in a now-deleted tweet, took to social media to simply say, “Vaccine I can’t do it……”

Add #Bucs RB Leonard Fournette to the list of players against getting the COVID-19 vaccine. pic.twitter.com/1IqlksESap

Las Vegas Raiders running back Jalen Richard also got in on the conversation, suggesting all unvaccinated players should read the league’s new policies, because “We playing in jail this year and you should act as such.” 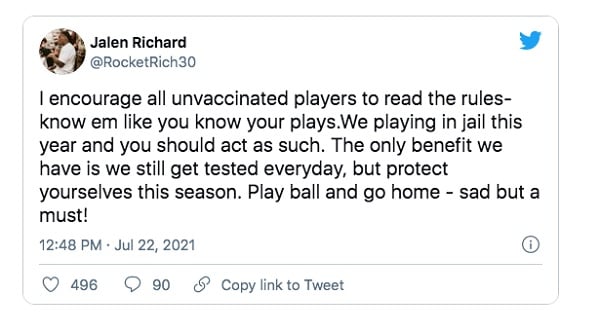 When recently asked about it by the press, Dallas Cowboys star running back Ezekiel Elliott said, although vaccinated himself, that the league shouldn’t force players to take the jab.

“I got the vaccine just because I wanted to put myself in the best situation to be out there for my team week in and week out. But I mean, not everyone feels that strongly or maybe other people still have their view of vaccines,” Elliott, who became infected with COVID-19 last year, said in his meeting with reporters. “You can’t force someone to do something that they don’t want to do to their body.”

Seattle Seahawks cornerback DJ Reed also took to Twitter about the experimental COVID-19 vaccine, being completely honest in saying he didn’t want to take the shot, but decided to do so because he didn’t want to harm his team’s chances of winning, and didn’t want his teammates to lose their paychecks.

I didn’t want to get the vaccine. We don’t know the long term effects. If you have the vaccine you can still catch COVID. The NFL & NFLPA made getting the vaccine a competitive advantage. I just got my vaccine because I don’t want to hinder my team, idk how I feel about that🤷🏾‍♂️.

“Players initially are going to speak out and push back, but much like with the labor negotiations, the players always end up doing what they’re told in an effort to play the sport they love and make as much money as possible,” Chiofalo told WND. “There’s plenty of Michael Irvins out there who take ‘team’ and ‘winning’ seriously enough to make sure the vaccine opponents become silent and fall in line.”

“No one in the NFL has a LeBron [James]-like pull when it comes to league decisions. The NFL is way more about ‘the shield’ and players understand that,” Chiofalo said. “[Tom] Brady, [Aaron] Rodgers, [Patrick] Mahomes, these guys don’t speak out in controversy against the league. Totally different culture [than the National Basketball Association].”

Chiofalo was referencing the NBA’s health and safety protocols involving COVID-19 regulations, and how the NBA backed off of punishing Los Angeles Lakers star LeBron James after he violated the league’s rules by attending a promotional event ahead of the first round series against the Phoenix Suns in the playoffs. James was facing suspension for the violation under the guidelines, but the league decided to keep him in action.

When asked if he was going to take the vaccine, James avoided answering the question and simply stated, “That’s a conversation that my family and I will have. Pretty much keep that to a private thing.”

Not much longer after James’ comments, his Lakers teammate guard Dennis Schroder revealed he and James are the only ones on the team who aren’t vaccinated.

Translation from a German article with an Interview with Dennis Schröder:

“Nearly the whole team is vaccinated – only LeBron and I are not, I think.”

“I can’t go into quarantine again, if that happens now, I‘ll miss a whole round in the playoffs. I can’t live with that” pic.twitter.com/heNvJtfFQG

“Some guys did, some guys didn’t for their own personal reasons,” said Davis.

Around the same time that LeBron James’ vaccination status started becoming public, the NBA made the announcement that it wasn’t making the COVID-19 vaccine mandatory.

With the other “Big Four” leagues of Major League Baseball (MLB) and the National Hockey League (NHL), they have also joined the NBA in not making the coronavirus shot mandatory for their players.

As far as the NFL is concerned, Chiofalo doesn’t see it backing off and joining the other leagues, instead moving forward with its tough vaccination policies. However, he doesn’t see anything too dramatic in the form of backlash affecting the league. Instead, he foresees the vaccine not even being a conversation next season.

“I don’t see them backing off this and I don’t see it affecting much. This is really a one-year thing,” said Chiofalo. “I don’t imagine the vaccine conversation will be taking place this time next year. If they got through last year, getting through this year will be easy peasy.”

As far as NFL star DeAndre Hopkins actually pulling the trigger on retirement, and other players such as Leonard Fournette, Chiofalo doesn’t see it happening.

“I don’t imagine there being one single player that elects to retire because of the vaccine stuff. Ultimately, players want to make money and playing football is how they do it,” Chiofalo said. “Some will talk a big game, but not a single player will retire over this.”

Nevertheless, as of right now there’s a lot of resistance against the NFL and its COVID-19 vaccine policies, even from outside of the league.

Darius Butler, a former player in the National Football League who now hosts a popular podcast, went on Twitter to say the NFL is “dead ass wrong” for “forcing these needles into players arms.”

The @NFL is dead ass wrong w/ that new memo they sent out to teams today. What’s new tho!? Basically forcing these needles into players arms at this point. Every player/personnel should have an ACTUAL “choice” in the matter. They are sending a CLEAR message today.

Happy Hopkins is standing up for himself. Pro forced vaxxers are going to claim he isn’t being forced into getting vaccinated, which is completely false. You are hanging his work life over his head into making a decision you support. That’s unconstitutional. https://t.co/EPP6HE0vdf

They love you one minute then hate you the next! Know thyself. https://t.co/aNKbgO5NSK

Despite all of the resistance, Chiofalo might be right in regards to the NFL not backing off.

On Friday, the Minnesota Vikings announced it had parted ways with assistant coach Rick Dennison over his refusal to take the experimental COVID-19 vaccine, which is a requirement for all Tier 1 staff, including coaches, front-office executives, equipment managers and scouts. Players are not required to take the jab, but through their strict policies, many are seeing the league “forcing” players to get the shot without actually mandating it.

It wasn’t just Dennison who was exiled from the league either. The New England Patriots also parted ways with co-offensive line coach Cole Popovich for refusing to take the vaccine.

So it doesn’t look like the National Football League is backing off at all, and is doing whatever it can at all costs to “protect the shield” as the 2021 season approaches.