But a flight attendant may have best encapsulated the joy as he walked down a cabin aisle holding up a garbage sack for passengers while beautifully singing an impromptu refrain, “Throwwwww awayyyyy your masks.”

The end of the #maskmandate has this plane singing

🎶 Throw away your masks 🎶 pic.twitter.com/BvvCNLE6Ts

A cursory look at the videos circulating on social media of the moment airliner passengers learned of the ruling suggests that very few travelers were in favor of the mandate.

Rep. Thomas Massie, R-Ky., wrote on Twitter that “the fact that 95%+ travelers took off their masks as soon as the mandate was invalidated should be a wake-up call to Democrats and Republicans who played along with them for the past two years.”

Former Harvard Medical School epidemiologist Martin Kulldorff tweeted that while the “ruling on ineffective masks came from a judge, the credit goes to public education and pressure from all of you. Airlines were so desperate to get rid of the mask mandate that they announced the change mid-flight.”

“Soon we’ll be seeing many incidents in which those who choose to protect themselves with KN95s etc face harassment, even violence. Because this was never about freedom,” he intoned on Twitter.

CDC rule ‘arbitrary’ and ‘capricious’
On Tuesday, the Transportation Security Administration said it will not enforce the COVID-19 mask mandate on planes and other public transportation after a federal judge in Florida on Monday struck down the requirement. But late Tuesday, the Justice Department said it will appeal the court ruling.

White House press secretary Jen Psaki on Monday expressed disappointment with the ruling. On Tuesday, President Biden was asked by a reporter during a trip to New Hampshire whether passengers should continue to wear a mask.

Asked whether his administration would challenge the ruling, Biden said he needed to speak with the CDC.

On Tuesday night, the Justice Department and the CDC released a statement saying we “disagree with the district court’s decision and will appeal, subject to CDC’s conclusion that the order remains necessary for public health.”

Last week, the Biden administration extended the mask mandate for travelers on federal transportation despite the pleas of the CEOs of 10 major airlines. The ruling Monday came from U.S. District Court Judge Kathryn Kimball Mizelle, who was appointed by former President Trump.

She found that the CDC failed to justify its decision to extend the mandate 15 days to May 3 and did not go through the required notice and comment period for federal rulemaking. The judge found that the mandate, in violation of the Administrative Procedure Act, was outside the scope of the CDC’s authority, calling it “arbitrary” and “capricious.”

They just announced on my flight the mask mandate for flights is over! pic.twitter.com/iRnkFly2w9

Mizelle, in her 59-page ruling, concluded the rule must be vacated nationwide, because “a limited remedy would be no remedy at all.”

“Because our system does not permit agencies to act unlawfully even in pursuit of desirable ends, the court declares unlawful and vacates the mask mandate,” she wrote.

Mizelle, 35, clerked for Justice Clarence Thomas. She was appointed by Trump and confirmed by the Senate just before the end of the lame duck session in 2020.

As used in hospital operating rooms
All 50 states now have lifted their mask mandates, and, meanwhile, the “risk of contracting coronavirus disease 2019 (COVID-19) during air travel is lower than from an office building, classroom, supermarket, or commuter train,” affirms an article in JAMA Network, a publication of the Journal of the American Medical Association.

COVID-19 data collected by the New York Times shows that mask mandates have had no impact on case rates. The Manhattan Institute’s City Journal published a graph based on that data comparing the cases in the 11 states that never mandated masks with the 39 that did. 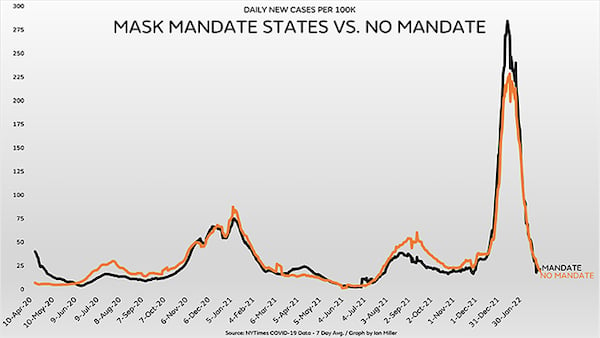 Further, many scientific studies confirm masks are not effective in curbing the spread of the virus. A study from Bangladesh touted by advocates of mask mandates was shown to have fundamental design flaws. And after researchers released more of their data, it was discovered there actually were minuscule infection differences between the treatment and control groups randomized across 600 villages.

See more videos of on-board reactions to the ruling:

I love these videos of pilots and flight attendants ending the mask mandate while passengers are on airplanes. Masks should never return for the rest of our lives. They don’t work and had zero impact against covid. pic.twitter.com/uqWfh0TPlh

“A lot of people not wearing a mask. Love it!”:

On Alaska Airlines, a pilot announces the end of masks with a “congratulations”. pic.twitter.com/eYl2TjyLoI

A flight attendant teared up as she told passengers that for the first time in two years, she didn’t have to wear a mask:

Plane applauded as the stewardess announced the end of the mandate. She broke into tears as she got to take off her mask for the first time in 2 years 😭 pic.twitter.com/WlCpZk30QM