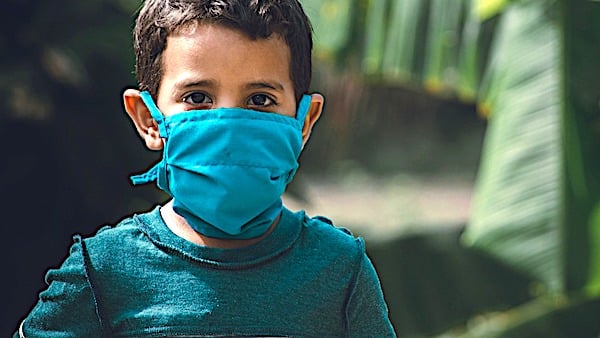 Those mask mandates imposed for the COVID pandemic could be hurting kids, and the vaccines could be killing them, according to a new Just the News report that cites several medical journals and studies.

“Measured carbon dioxide content in ‘inhaled air,’ observed in a study of masked German schoolchildren, was at least three-fold higher than German law allows, according to a research letter published this week in the Journal of the American Medical Association Pediatrics,” the report said. And, “Last week, the journal Vaccines, affiliated with the American Society for Virology, published research that estimates every three COVID-19 deaths prevented by vaccination are offset by two deaths ‘inflicted by vaccination,’ using Israeli and European data.”

Masks and vaccines — and lockdowns — have been among America’s main responses to the virus that likely originated with a Chinese lab in Wuhan that works with the Chinese Communist Party’s military.

Those defensive strategies were adopted over treatments with ivermectin and hydroxychloroquine that some studies have suggested are effective against the virus.

The Just the News report cited the work of Harald Walach, the lead author of both studies, who is a professor Poznan University of the Medical Sciences’ Pediatric Clinic in Poland and University of Witten/Herdecke’s psychology department in Germany.

Most of the children who reported cases of irritability, headache and reluctance to go to school that came from a German register of problems “can be understood as consequences of elevated carbon dioxide levels in inhaled air,” said a JAMA Pediatrics paper.

The report said the study cited the “dead-space volume of the masks, which collects exhaled carbon dioxide quickly after a short time.”

It found that policymakers should reconsider mask demands for children because of the possible impairments from “hypercapnia,” or a buildup of CO2 in the blood.

“The study passed muster at the University of Witten/Herdecke’s ethics board, given that it required each child to wear various masks for a total of 15 minutes, in contrast to the ‘several hours; they spend masked in school, the trial protocol said,” the report confirmed.

The study assessed 45 health children ages 6-17 with various masks in a well-ventilated room.

“Two thousand parts per million of CO2, or 0.2%, is the limit for closed rooms under German law, the study said. The child with the lowest CO2 level was three times higher than this limit, while one 7-year-old was measured with 25,000 parts per million.”

The subsequent questions include why studies used to promote masking don’t have a control group, and why studies have failed to address “all-day mask wearing.”

The report said the review in Vaccine estimated the “number needed to vaccinate” (NNTV) to prevent one COVID-19 death, using a million-person Israeli field study and “the most prominent trial data from regulatory phase 3 trials.”

It looked at fatal side effects and more.

“Simply put: As we prevent three deaths by vaccinating, we incur two deaths,” according to the paper, though looking at phase 3 trial data alone, the “optimum case” is four deaths caused and 33 lives saved by vaccines, Just the News reported.

“However, one should consider the simple legal fact that a death associated with a vaccination is different in kind and legal status from a death suffered as a consequence of an incidental infection,” the paper said.

Jane Orient, chief of the Association of American Physicians and Surgeons, said the Vaccine paper “is an excellent and much needed analysis.”

But she thinks the risk-benefit ratio is likely to be “much worse” than the paper’s authors estimate.

The publication days after releasing the results expressed doubts about what it documented, and said it was investigating.