A day after the release of internal communications showing the FBI used Twitter to censor an accurate story that likely would have led to President Trump’s reelection, a new Twitter Files edition Tuesday reveals the social media giant’s direct cooperation with U.S. military influence operations.

But he points to Twitter’s promise to Congress to rapidly identify and shut down all state-backed covert information operations and deceptive propaganda. 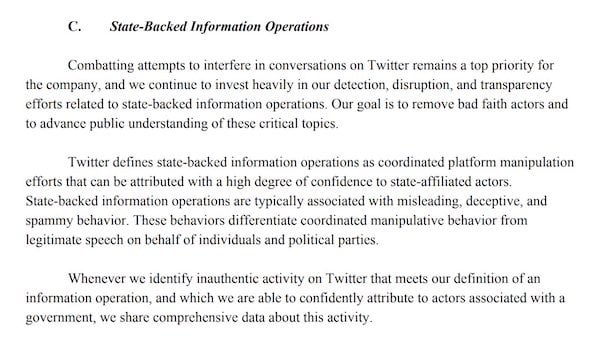 In September, the Washington Post reported Pentagon officials ordered a sweeping review of U.S. information warfare operations conducted through social media platforms. The order came after Twitter and Meta identified networks of fake accounts believed to be connected to the U.S. military.

On Monday, Twitter Files No. 7 released by new CEO Elon Musk revealed the FBI worked with the intelligence community to pressure Twitter and other social media and news media to censor the New York Post’s revelations of Joe Biden’s knowledge of his family’s influence-peddling operation while lacking any evidence of a purported Russian “disinformation” operation.

Factual information about the foreign business dealings was discredited by the FBI and the IC both after and before the Post’s blockbuster Oct. 14, 2020, story, according to a report by journalist Michael Shellenberger.

Significantly, in July 2020, the FBI’s Elvis Chan – assistant special agent in charge at the office in San Francisco, where Twitter is headquartered – arranged for temporary Top Secret security clearances for Twitter executives to enable the FBI to share information about “threats” to the upcoming elections.

Further, the latest release of internal communications revealed, the FBI paid Twitter at least $3.4 million for its work.