Yet another attempt to breathe life into zombie ERA fails 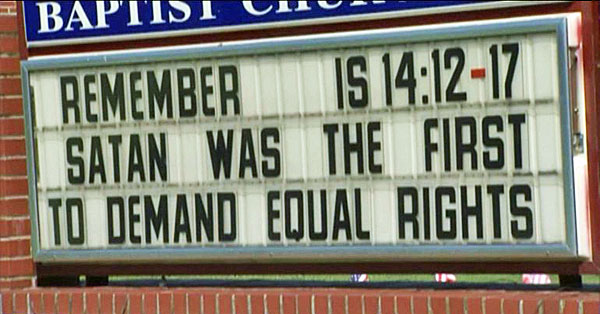 So it’s doubtful that the latest ruling, a decision from a three-judge panel at the 1st U.S. Circuit Court of Appeals, against plaintiffs who wanted an order that the archivist of the United States publish it, and recognize it as part of the Constitution, will end the dispute.

After all, there’s another lawsuit with similar claims already in the pipeline.

The issue is that when the amendment was proposed years ago, Congress set a deadline for states to adopt it, which passed before the requisite 38 yes votes were reached. Congress then extended the deadline, with identical results.

But just last year, the 38th state legislature voted for the ERA, and its supporters now claim that it’s part of the Constitution. Multiple courts, multiple judges and even the Department of Justice have scoffed at the claim.

The latest ruling came just this week from the appeals court, in the case Equal Means Equal v. Ferriero.

“Today’s ruling continues an unbroken, 40-year losing streak by advocates of the ERA-is-alive cult in the federal courts, before federal judges of every stripe of judicial philosophy and political background,” explained Douglas Johnson, director of the National Right to Life Committee’s ERA Project.

The action claimed the 1979 ratification deadline that Congress included in the 1972 ERA Resolution was unconstitutional, and that the archivist’s refusal to certify the ERA harmed women as a class and the plaintiffs individually.

The appeals ruling affirmed the decision on August 6, 2020, by Judge Denise Casper, an Obama appointee, who also dismissed the case.

She said the plaintiffs failed to show the type of injury required in federal lawsuits.

The Supreme Court already has refused to take the case once.

“The federal constitutional questions that the plaintiffs’ complaint raises concerning the legal status of the ERA are significant,” the panel said. “To be fit for adjudication in federal court, however, they must be raised in a suit that satisfies the requirements of Article III,” which include standing.

The ruling was written by Chief Judge Jeffrey Howard and was joined by Judges Sandra Lynch and David Barron.

The additional, still-pending case was brought by officials in Virginia, Nevada, and Illinois and the initial ruling from U.S. District Judge Rudolph Contreras was that the constitutional deadline for the amendment already has passed.

They have now appealed to the U.S. Court of Appeals for the District of Columbia.

Johnson explained, “While the mainstream news media have been receptive to the narrative that the ERA is alive and perhaps on the verge of becoming part of the Constitution, objective examination of the judicial history suggests something more akin to a political hoax. Devotees of the ERA-is-alive cult have suffered an unbroken, 40-year string of defeats before federal judges of every stripe of judicial philosophy and political background. The two current lawsuits claiming that the ERA is alive have now been rejected by a total of five federal judges, four of whom were appointed by Democratic presidents. Over a 40-year period, 23 federal judges and justices have taken adverse actions on various ERA-is-alive legal claims, and not a single judge has accepted any one of the ERA-is-alive movement’s grab-bag of legal theories.”

Leftists in Congress also have been active, attempting to “remove” the congressionally adopted deadline for the ERA just this year.

The Office of Legal Counsel of the Department of Justice opined in January 2020 that the ERA expired in 1979, that Congress lacked power to retroactively undo that expiration, and that the only constitutional route for ERA advocates was to begin the amendment process over again.

The threat feared from the long-dead amendment is that it could be employed by activist judges who would want to make America a virtually abortion-for-all nation, as NARAL Pro-Choice America has argued “the ERA would reinforce the constitutional right to abortion… [it] would require judges to strike down anti-abortion laws…”

Spokeswoman Denise Harle of the Alliance Defending Freedom said, “The Equal Rights Amendment has been legally dead for a very long time. Congress gave states seven years to ratify it, a deadline that came and went decades ago. Honest advocates for the ERA have long understood that their time has expired, and any legitimate effort to add this amendment to the Constitution would have to start over from the beginning. The decision in this case rightfully hinders the current campaign to illegally sneak the ERA into the Constitution, which ADF has opposed in a separate case. If that effort is ultimately successful, the rule of law will be undermined as the Constitution’s amendment process is discarded for political convenience.”

It was lawmakers in Virginia who last year adopted the amendment, then claiming the state was the 38th to adopt it. But only 35 had adopted it by the deadline.

The concept first was proposed in the U.S. House in 1923, but it didn’t gain congressional action until the 1970s. But that legislation included a ratification deadline, which was extended once but that action happened before the time had expired.

In recent years, three states sued to keep the ERA corpse in its grave.

AP reported South Dakota, Louisiana and Alabama have filed a federal case to block the ERA should there be support.

The lawsuit seeks to prevent the U.S. archivist, David Ferriero, from accepting a new ratification from a state.

He said it’s an issue “of following the rule of law, the rules that our Founding Fathers put into place to protect us from government making decisions without the consent or support of ‘we the people.'”

“If Congress wants to pass an updated version of the ERA, taking into consideration all the changes in the law since 1972, I have no doubt the South Dakota Legislature would debate the merits in a new ratification process. An amendment to the Constitution should not be done by procedural nuances decades after the deadline prescribed by Congress, but through an open and transparent process where each state knows the ramifications of its actions.”

During the original time period, only 35 states approved it. In recent years, and after the deadline, Virginia, Illinois and Nevada approved it. But ratification votes by Nebraska, Tennessee, Idaho, Kentucky and South Dakota were withdrawn. ERA activists demand that the first three votes are good, but the other five should not be counted.

Conservative icon Phyllis Schlafly mobilized conservatives to oppose it. She argued “the ERA would disadvantage housewives, cause women to be drafted, threaten protections such as alimony, and eliminate the tendency for mothers to obtain custody over their children in divorce cases.”

Even the late leftist icon Ruth Ginsburg, on the Supreme Court, admitted that if amendment fans wanted it in the Constitution, they would need to begin the process anew.