Is it time for your own gold or silver strike?

On Jan. 24, 1848, a millwright discovered gold along the banks of Sutter’s Creek in California. It changed the Golden State and the American West forever.

History.com tells some of the backstory:

“In the 1840s, Sutter’s Fort became the first stopping-off point for overland Anglo-American emigrants coming to California to build farms and ranches. Though sworn to protect the Mexican province from falling under the control of the growing number of Americans, [John Augustus] Sutter recognized that his future wealth and influence lay with these Anglo settlers. With the outbreak of the Mexican War in 1846, he threw his support to the Americans, who emerged victorious in the fall of 1847.

“With the war over and California securely in the hands of the United States, Sutter hired the millwright James Marshall to build a sawmill along the South Fork of the American River in January 1848. In order to redirect the flow of water to the mill’s waterwheel, Marshall supervised the excavation of a shallow millrace. On the morning of Jan. 24, 1848, Marshall was looking over the freshly cut millrace when a sparkle of light in the dark earth caught his eye. Looking more closely, Marshall found that much of the millrace was speckled with what appeared to be small flakes of gold, and he rushed to tell Sutter. After an assayer confirmed that the flakes were indeed gold, Sutter quietly set about gathering up as much of the gold as he could, hoping to keep the discovery a secret. However, word soon leaked out and, within months, the largest gold rush in the world had begun.”

And the rest is history, as they say.

But discovery of and investment in precious metals doesn’t have to be a point of distant history and another man’s treasure trove story. It can be a part of your current events – a building enterprise in your own financial portfolio, especially with the massive increase in inflation and the instabilities in the dollar and other financial markets.

Can you believe how much inflation has increased this past year under a Biden administration? Wow! It truly has skyrocketed! I was watching the news this past week, and took a photo of this inflation chart: 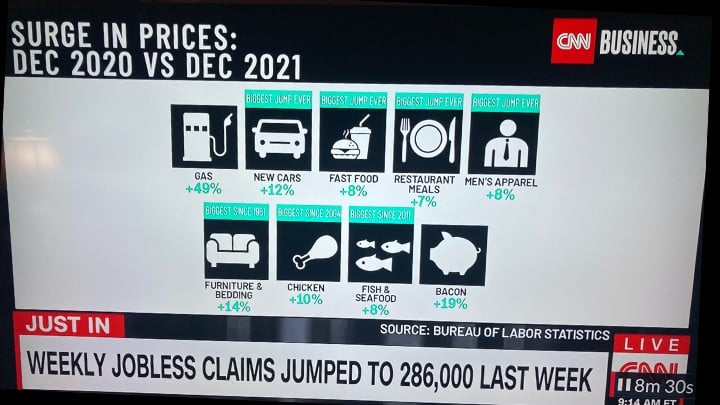 Today, under Mr. Biden’s administration, the federal budget is a staggering $6 trillion (the largest in U.S. history). The national deficit is a colossal $1.931 trillion, and the national debt is three times the amount of 2007 at a gargantuan $29 trillion dollars.

The national debt is not merely the result of excessive spending; it is also the result of revenues not being high enough to pay for government outlays (expenditures). In other words, while the feds have spent trillions and trillions and trillions of dollars on the national credit (debt) card bailing out everyone from automotive businesses to fake seaweed companies and zebra-loving environmental companies, they do nothing to increase the federal revenue to pay for it all.

When the receipts don’t cover the outlays, it should be a sign the U.S. government is in trouble, but that’s just another typical day of federal government operation. When government wastes over $100 million a year alone on minting pennies for 1.76 cents each and nickels at 7.5 cents each, the federal government should be the first to recognize that it runs the worst business in the world; but it is the last to admit it. And that’s been going on for decades! How much more can our federal wallet, economy and U.S. dollar take before they snap or even collapse?

(This also is very reminiscent of 2009, when then-Vice President Biden again called for more government spending to lift us from the recession. Does he not have any other wealth-producing options?)

In December 2020, Steve Forbes, editor-in-chief of Forbes business magazine, answered the question, “Will Gold Prices Skyrocket in 2021?” with a definitive “Yes!”

Forbes explained why: “The reason is an age-old one: the government churning out too much money. Since the coronavirus crisis shut down the economy, Washington has spent trillions of dollars in relief efforts. The national debt has increased more in recent months than in the previous ten years put together. Help was needed, but most of the spending came from money being created out of thin air by the Federal Reserve. This is a formula for inflation – and traditionally that means the price of gold will be moving up, big time.”

When my wife, Gena, and I decided that I would become a spokesperson for GOLDCO, it wasn’t a hard decision at all. We’ve been a big fan of gold and other precious metals for over 40 years. Gold has always been a part of our financial portfolio. Our gold’s return has helped us make future investments and even bailed us out of tough economic times.

During the economic recession in the late 2000s, most people were struggling to make ends meet let alone able to make donations to organizations like Kickstart Kids, which is our nonprofit charity that teaches students character through karate in middle schools across Texas. When donations were down, we were able to cash in some of our gold to help support our nonprofit life mission and those employed by it.

When I first surveyed the value of gold through the years, I was pleasantly surprised to learn that the universally prized yellow metal was the one commodity that kept soaring in value. In 1973, its average value was $97 an ounce, according to Macrotrends. By 1980, an ounce was valued at $614. Today, an ounce of gold is valued at $1835, climbing 80% of the time since 2000.

Though fluctuating time to time, even silver prices have continued to climb since 2000:

If gold is too costly at the moment for your purse, then by all means start with silver, which spiked in 2020 to an eight-year high. In fact, you might even consider starting your precious metal coin investments with GOLDCO’s newly-minted exclusive Chuck Norris Silver Coin.

GOLDCO’s specialists can also help you roll over or transfer assets from a 401(k), IRA, TSP, or pension account into a gold IRA. They work with mints around the world to source precious metals and ensure that what you’re buying is guaranteed to be 100% authentic. And they can even help you take a distribution in cash or gold.

With the beginning of this new year, the time for action and change is now! It’s time for you to look beyond the dollar for your ongoing financial security and future. Investing in precious metals is your way through and out of the next three years of inflation under Mr. Biden.

It’s your life, family, future and finances. Take action now before it’s too late. Contact a Goldco representative ASAP. At very least, go to their website with a single click and ask for the next edition of my FREE Goldco Chuck Norris Special Report and Bonus Newsletter. And tell them Chuck sent you!