It’s 2020, so what else could happen or change? You guessed it: the Christmas culture wars.

In the “good old days,” that is prior to 2020, December would hit and culture wars over terminology and testimony would ensue: Will businesses use the term “Christmas” or “holidays” in their greetings and sales? Will government buildings be allowed to erect nativities or menorahs in front of them? Will public schools whitewash the real history and meaning of Christmas?

Today, in the midst of the pandemonium of a pandemic, COVID-19 has not only changed but scrambled and escalated the Christmas culture wars to a new level. Governmental lockdowns and restrictions have transported us into an entirely different yuletide and lost world.

First, instead of Christmas being over commercialized, its symbols are flying off the commercial shelves. In our coronavirus fatigue, Americans are rebelling toward Christmas observance. They are fighting to better celebrate a more meaningful Christmas by purchasing all the lights and ornamental displays.

This past week in an article titled, “Christmas Decorations Are in Short Supply,” the Wall Street Journal reported: “Holiday décor is selling out faster than usual in many stores with two weeks left before Christmas, as Americans fill dark, increasingly cold pandemic days by buying up more lights, trees and ornaments at a rapid pace.”

The Journal went on to say, “Walmart Inc., Costco Wholesale Corp. , At Home Group Inc. and other retailers known for selling holiday items didn’t anticipate the pandemic-fueled surge when buying most products for the season nearly a year ago, say executives and people familiar with the situation. In some cases, executives made purchase decisions just as coronavirus-related restrictions took hold and trimmed orders. The imbalance, which has left some locations with bare shelves, is a stark example of how the pandemic has disrupted retail strategies and strained supply chains during the critical shopping season.”

Second, with unemployment skyrocketing and business closures proliferating like a virus (110,000 restaurants have already closed for good, according to Bloomberg), most Americans are personally struggling like never before how to even afford Christmas this year.

Wallet Hub cited a new study that reported 1 in 3 Americans are forgoing Christmas gifts altogether this year. Of those who are purchasing gifts, 102 million, or roughly one-third of all Americans, say they will spend less on gifts.

Some economic advisers say that’s a good move since almost 41 million Americans still have credit card debt from last holiday season. (Interesting to note, regarding our values and spending, more than 40% said they won’t shop with retailers that have laid off staff or reduced employees’ benefits because of the pandemic.)

Despite the struggles, many moralists say the shift in focus from Christmas commercialism is good for America. It allows pandemic-weary shoppers to enjoy a more meaningful holiday and maybe even reignite the real reason for the season. The problem is, even that clearer Christmas focus is being blurred because government officials are mandating synagogues and churches vacate their buildings and, hence, prohibiting public celebrations of Hanukkah and Christmas.

That leads me to the third and greatest way COVID-19 is scrambling and escalating the Christmas culture wars: government overreach is unprecedentedly challenging the very fabric of our Republic (the U.S. Constitution) and the holiday season by restricting the Free Exercise Clause in the First Amendment. It’s not that there’s no room in the inn this Christmas; in most states, there are no parishioners in the pews.

The U.S. Supreme Court agreed by its stand against governors’ overreaching mandates to shut down church and synagogue gatherings. As USA Today reported, “The Supreme Court ordered California judges … to follow its lead in blocking stringent coronavirus restrictions on houses of worship, as the high court did in a New York case.” As a result, thousands of California churches are now maintaining precautions against COVID-19 while still celebrating Christmas services publicly.

Christmas culture wars don’t get any bigger than when the state orders churches to shut down during Easter and Christmas, the two high holy days in the calendar year. Is it really coincidental that the only time in 2020 when mandates were enacted against indoor gatherings of faith centers was at Easter and Christmas or Passover and Hanukkah?

There’s another grave oversight and overreach being enforced upon faith centers across America, and they have to do with misunderstanding their true purpose and essential nature as healing institutions. Churches and synagogues are not simple gatherings of people like at a sporting event, but spiritual hospitals that are actually saving people from “deaths of despair.” Diseases of despair are overdoses of drugs and alcohol, suicides, and can even be deaths by exacerbated mental illnesses, depression, loneliness, isolation, etc.

As they say, follow the science! Deaths (diseases) of despair have been called “the unspoken pandemic” because they have statistically skyrocketed during the COVID-19 pandemic and yet rarely if ever are reported by the news. But Business Insider just recently reported, “Pandemic-related ‘deaths of despair’ were forecast at about 75,000 back in May – now they could be up to 150,000.” Please reread that tragic number: 150,000! That number doesn’t include the millions of other Americans who don’t die but suffer from these diseases of despair, and whose lives and families are maimed and marred in some cases forever.

Statistics for deaths of despair were already going through the roof starting from around 2010. However, 2020, with its governmental overreaches, mandates and restrictions, have sent them through the stratosphere. 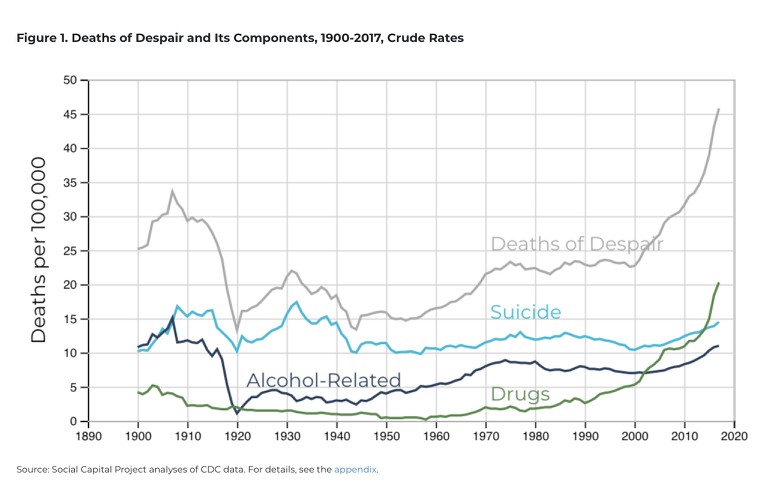 So, what is society to do to help save those 150,000 citizens who are dying from despair and their families who suffer alongside them? Science has echoed the real answer, namely Harvard science.

In May, Harvard’s School of Public Health reported: “Regularly attending religious services associated with lower risk of deaths of despair.” Can you again please read that heading one more time?

The Press Release detailed the study’s conclusion: “‘People who attended religious services at least once a week were significantly less likely to die from ‘deaths of despair,’ including deaths related to suicide, drug overdose, and alcohol poisoning, according to new research led by Harvard T.H. Chan School of Public Health.” (What about the words “significantly less likely” is not clear?)

But here’s the rub for our overreaching governors to ponder: How can faith centers help to save 150,000 deaths of despair when they are being forced to close down? So-called experts on news broadcasts repeatedly say every week: “If the majority of Americans wear masks, tens of thousands of Americans could live who would have otherwise died.” Could the same thing not also be said of churches and synagogues regarding deaths of despair? “If the majority of faith centers were allowed to meet with COVID-19 precautions in place, tens of thousands of Americans could live and wouldn’t die from deaths of despair.” Why is one message and narrative valid and not the other?

Here’s the point in plain English. Follow the Harvard science: shutting down faith centers like synagogues and churches during the escalation of deaths of despair is exactly like shutting down hospitals during escalating death rates from COVID-19.

The truth is: While government has shut down businesses and locked down citizens, they have simultaneously enabled and increased the diseases of despair and 150,000 deaths of despair. While trying to save people from the jaws of the coronavirus, they have handed them over to the lions of despair. And to add insult to injury, literally, they have closed down the very healing institutions (spiritual hospitals) that could save people from the downward slope of despair diseases and their fallout on families. How tragic!

And government officials say churches aren’t “essential” like schools, hardware stores, restaurants and certain indoor sporting events? Moreover, why is it 200 people can be trusted and allowed in a Lowes or Costco every day with social distancing but not even three people can sit in pews at 50 feet apart in churches on Sundays? Why is it that dozens and even hundreds of people can sit in tens of thousands of metal capsules we call planes and fly around the U.S. for hours at a time every day, but not even 12 people can sit for a single hour with social distancing in church services on Christmas Day? Hypocrisy! That’s not following science, but ignorance and bias. No surprise that governors like California’s Gavin Newsom are suffering such backlash.

Three thoughts immediately come to mind regarding government’s inept and irrational response to COVID-19 and the collateral damage of those 150,000 precious American souls, who state officials send to despair dungeons:

Do you appreciate WND’s unfiltered hard-hitting news and commentary? Read us AD-FREE by becoming a WND Insider! Find out more.